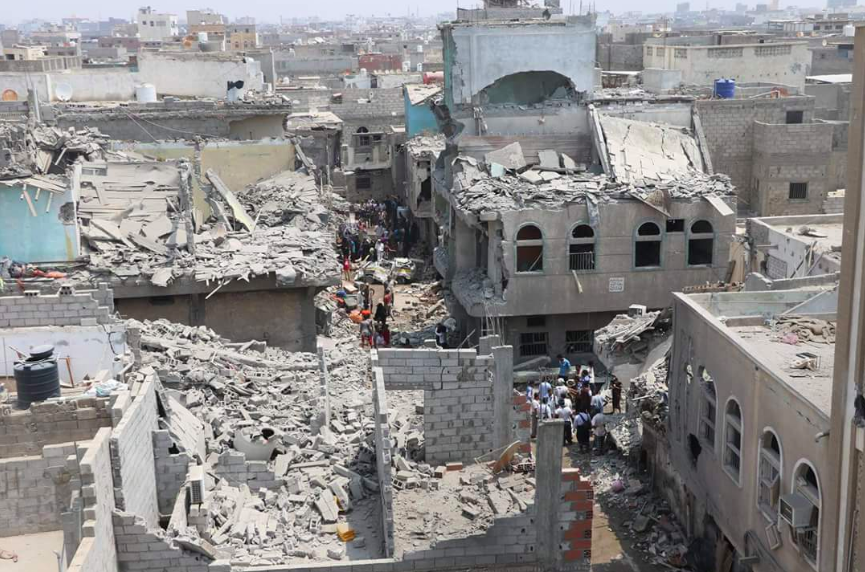 A view of the Alhook district in Hodeida a day after airstrikes killed 30 on September 21. Source: Hisham Al-Omeisy on Twitter.

On Wednesday September 21, 2016, Saudi-led airstrikes struck Yemen's port city of Al Hudaydah. According to medical sources speaking to CNN, at least 30 civilians were killed and at least 14 homes were destroyed, with over 90 damaged.

Al Hudaydah, also spelled ‘Hodeida’ (الحديدة‎‎), is under the control of Houthi rebels and has therefore been the target of repeated bombing by the Saudi-led coalition. Indeed, Al Arabiya reports that “a meeting of the leaders of Houthi militias inside the presidential palace” was taking place. The United Nations has condemned the air strikes.

The conflict in Yemen is often called ‘The Forgotten War‘ and the actors taking part in it are not always well-understood by international observers. In 2015, the BBC wrote an article entitled ‘Yemen crisis: Who is fighting whom?’ in which they explained that:

The main fight is between forces loyal to the beleaguered President, Abdrabbuh Mansour Hadi, and those allied to Zaidi Shia rebels known as Houthis, who forced Mr Hadi to flee the capital Sanaa in February.

Yemen's security forces have split loyalties, with some units backing Mr Hadi, and others the Houthis and Mr Hadi's predecessor Ali Abdullah Saleh, who has remained politically influential. Mr Hadi is also supported in the predominantly Sunni south of the country by militia known as Popular Resistance Committees and local tribesmen.

Both President Hadi and the Houthis are opposed by al-Qaeda in the Arabian Peninsula (AQAP), which has staged numerous deadly attacks from its strongholds in the south and south-east.

Amnesty International also has a report explaining the conflict, going back as far as 1990 to give context. It mentions how all parties in this conflict have committed “violations of human rights and international humanitarian law”. Recently, we learned that at least 10,000 people have been killed since 2015, with approximately 60% killed by the Saudi-led coalition.

Claiming that they were targeting a hostile naval base, the coalition first bombed the city's port in August 2015, blockading the port, besieging the city, and preventing relief funds and humanitarian aid from reaching those in need.

Al Hudaydah is one of Yemen's largest cities, with a population of over 400,000 people; it is also the capital of the Al Hudaydah Governorate, which in itself has over 2,620,000 people.

When asked by CNN about reports of civilian casualties in Al Hudaydah, the coalition's spokesperson, Ahmed Asseri, gave a vague response:

As with any allegations we receive, the information will be reviewed and once it is found [to be] supporting the allegation based on credible evidence, we will then move to a next step of investigation.

Meanwhile, Yemenis have taken to social media to express their frustration at the international community's failure to respond to the crisis.

Al Hudaydah, that city of people known for simplicity, kindness, and merriness… We spent the most beautiful days of our lives there. A city of heavenly lighthearted people. Their hearts and smiles shone like the moonlight. But the moon will no longer reflect its light on Hudaydah… Darkness. Only darkness will be found in Hudaydah after tonight, darkness and cries of despair.

From the black skies fell not the stars, but their missiles. The missiles of the Barbarian criminals who pursue nothing but to rape all that is beautiful. Their missiles raped our beautiful Red Bride. They ripped her virginity and seared her dress with blood. Blood. Our beloved city is swimming in a pool of blood and shrieks of pain…

My people cry and their tears fall not from their eyes, but rather from their hearts… Their hearts that are no longer pounding for they lie under the debris and rubble of the city.

Like countless other Yemenis, Hamiddadin cannot travel back to Yemen since the airport was closed on August 10, thanks to the Saudi-led coalition's intensified airstrikes on Sanaa. Indeed, as Public Radio International reported:

With the closing of Yemeni airspace, there have been few commercial flights in and out of the Sanaa airport. The only aircraft in the skies over the capital are war planes.

A screenshot of Yemeni airspace from FlightRadar24 on September 23 shows how empty it is (warplanes do not appear on the radar): 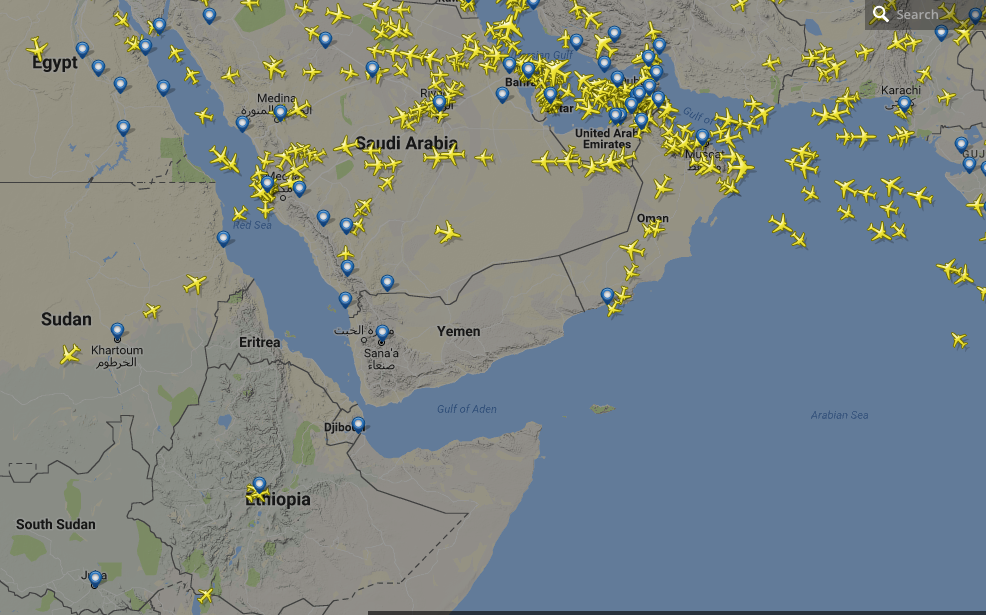 Am I being naive to still hope for int'l condemnations of last night's Saudi airstrikes on Hodeidah homes? #Yemenpic.twitter.com/JLPTEprnXU

The area's history dates back nearly 1,400 years, making it one of the oldest in Yemen. Zabid, a town near the coast in Al Hudaydah Governorate, has been a UNESCO World Heritage Site since 1993 and on the List of World Heritage in Danger since 2000. It is known for its Great Mosque, built in 628 AD by Abu Musa Ashaari, one of the followers of Muhammad.

After Aden, Al Hudaydah city's port is the most important in Yemen and is therefore of great geopolitical value.