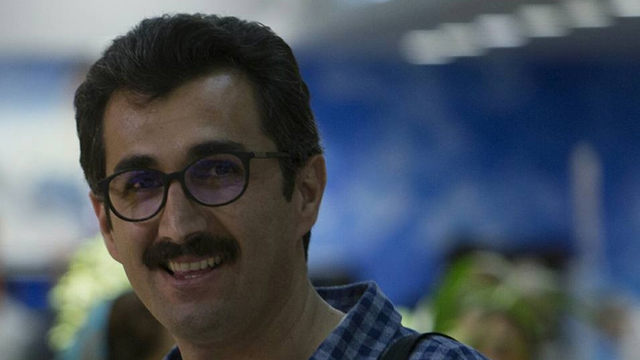 Sadra Mohaghegh. Image from ICHRI and used with permission.

Sadra Mohaghegh, the social affairs editor of the reformist Iranian newspaper Shargh, was arrested on September 19, 2016, but the circumstances surrounding his arrest and the charges against him are unclear, according to his lawyer.

The arrest comes on the heels of an international tour by President Hassan Rouhani that will end at the United Nations General Assembly in New York, where he held a press conference on September 22.

Mohammad Saleh Nikbakht told the International Campaign for Human Rights in Iran that his client was taken into custody by agents from a security organization, but the agents did not identify their employer.

“The agents confiscated laptops and mobile phones belonging to Mohaghegh and his wife and demanded the passwords to their social media accounts,” an informed source told the Campaign.

The semi-official Mehr News Agency reported on September 19 that a newspaper editor identified as “S-M” had been detained by “one of the security agencies” for working with “anti-revolutionary” media outlets. Later that day, Shargh confirmed Mohaghegh’s arrest via its Twitter account.

Mehr published the report with an image used by Iran’s Revolutionary Guards — a body responsible for the imprisonment of many activists, journalists and dissenters — to publicize its crackdown on journalists they claim are working for “enemy states.”

Mohaghegh is well known for his reports on environmental issues and informative social media postings; a few hours after his arrest, his Twitter and Facebook accounts became inaccessible. He was briefly arrested on two previous occasions, in 2012 and 2013, but was never prosecuted.

Another journalist, Yashar Soltani, remained detained in Evin Prison on September 17 after he was unable to post the bail, set at two billion rials ($65,000 USD), for his release prior to his trial. Soltani, the editor-in-chief of Memari News, an independent website that was suspended on September 9, 2016, is being investigated for publishing an official report on illegal land sales by the Tehran Municipality.