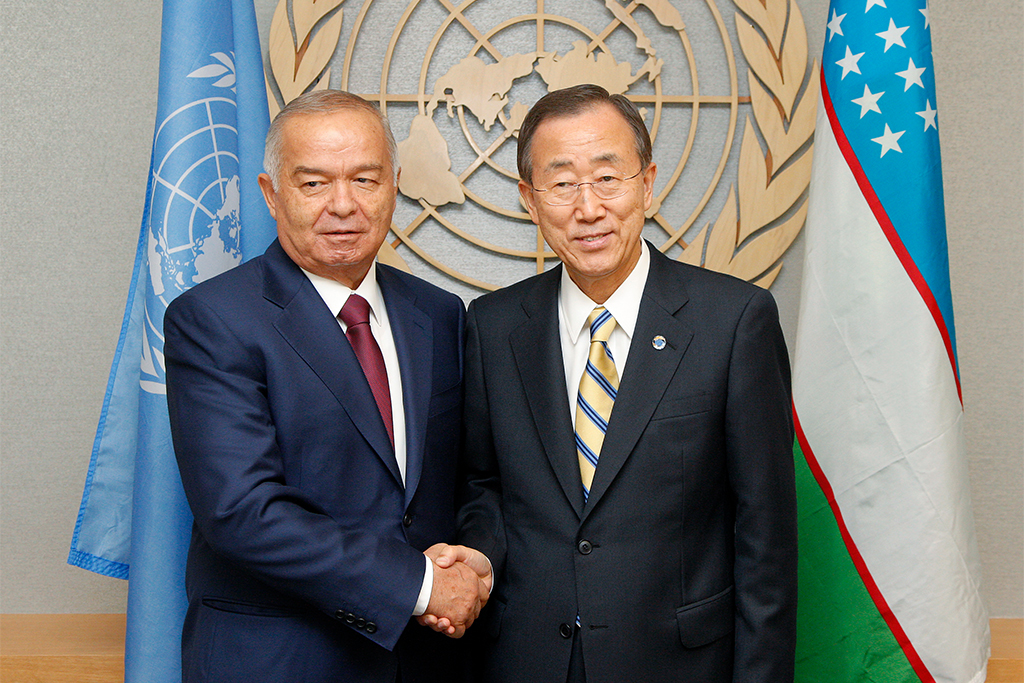 Secretary-General Ban Ki-moon has met several times with Islam Karimov, President of the Republic of Uzbekistan. Here they are pictured in September of 2010. UN Photo/Evan Schneider

In his last speech as the United Nations Secretary General at the opening of the 71st session of the General Assembly of the UN in New York on September 20, 2016, Ban Ki-moon opened up on everything he had learned during ten years at the apex of one of the most powerful, but simultaneously most dysfunctional organizations in the world.

His speech was a defence of the oppressed and an assault on oppressors. He rode a metaphorical tank over the world's longtime dictators, calling Bashar Assad worse than ISIS, while defending Muslims.

Some passages in his speech also seemed to be aimed at the ossified and aspiring autocrats in Central Asia, such as this one:

Just last week Turkmenistan inserted changes into its constitution that will allow President Gurbanguly Berdymukhamedov to rule for life. The broader population was not consulted.

That followed a constitutional referendum in May 2016 in Tajikistan that seems to install as a dynasty the Rakhmon family that has effectively ruled the country since 1992.

In the Caucasus state of Azerbaijan and the Central Asian republic of Kyrgyzstan, constitutional referendums are also pending.

In 25 years of independence, all Central Asian countries have rewritten their constitutions, mostly to benefit incumbent leaders, while only Kyrgyzstan has ever held an election judged free and fair by international vote monitors.

Ban Ki-moon told “fathers-of-nations” all over the world:

Leaders must understand that holding office is a trust, granted by the people, not personal property.

Anyone, probably, but not Tajikistan ))))

What are you saying? Of course not Tajikistan! Maybe he meant Canada, Switzerland and so on ((((

Speaking weeks after the death of long-reigning Uzbek President Islam Karimov — to whom he paid tribute on September 16 — Ban Ki-Moon also said:

His message about torture is particularly relevant in Central Asia, where security forces have rich imaginations when it comes to their treatment of activists, political opponents and pious Muslims that refuse to worship in mosques where clerics issue sermons praising autocrats.

Trumped up charges range from backdated accusations of sexual assault, possession of narcotics (planted), financial fraud (invented) and the increasingly popular “membership of a terrorist organisation.”

Methods for extracting confessions include needles under the nails, electrocutions, and in the case of Uzbekistan, occasional boiling — or after a swell of international criticism, freezing — of suspects. Here are Amnesty International’s profiles on Kazakhstan, Kyrgyzstan, Tajikistan, Turkmenistan, and Uzbekistan for more information.

In these secular countries, where up to 90% of the population follows Islam, growing a beard or wearing a hijab can earn a rebuke or worse — a forced shaving, for instance — from the state.

Doubtless the UN Secretary General was addressing this kind of persecution, as well as growing intolerance of Muslims in Europe and the United States when he said:

Muslims in particular are being targeted by stereotyping and suspicions that have haunting echoes of the dark past.

Ban Ki-moon’s last speech as UN Secretary General contained notes of hope, too. Notably, the hope that power will be invested in the diverse people of the world.

He cited examples of inspiring humanity, such as a nurse in Sierra Leone, a Syrian refugee swimmer, a Pakistani blogger.

Sadly there were no names from Central Asia on his list, but hope remains for the people of these ex-Soviet countries that a new generation will find its voice to promote change, and put the region on the map for the right reasons.