The Office on Missing Persons in Sri Lanka: A New Chapter or Another Empty Promise? 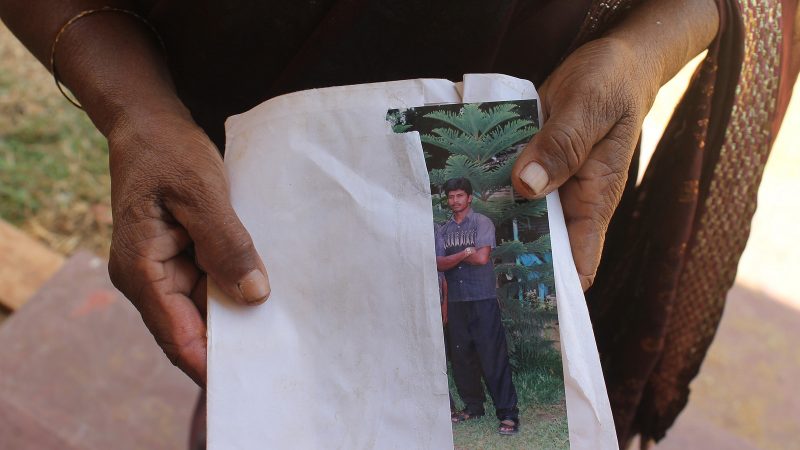 A mother is still waiting for her missing son. Image via Flickr, by Vikalpa/Groundviews.

This post by Bhavani Fonseka originally appeared on Groundviews, an award-winning citizen journalism website in Sri Lanka. An edited version is published below as part of a content-sharing agreement.

11 August 2016 was an important day for the victims of past abuses in Sri Lanka. This was when Sri Lanka’s Parliament enacted legislation to establish the first permanent entity to investigate enforced and involuntary disappearances and missing persons. For the family members of the victims, many of whom have experienced numerous investigations with no follow-up, the Office on Missing Persons may finally be able to provide them answers and end the silence.

Thousands of people have disappeared in Sri Lanka since the 1980s stemming from the country's 26-year-long war with Tamil Tiger rebels (1983-2009) and a separate Marxist insurrection (1987-89). Different human rights groups have documented many of the disappearances and attributed them to the Sri Lankan security forces, pro-government paramilitary groups and Sri Lankan Tamil militant groups. In 2016, the present coalition government under President Maithripala Sirisena agreed to issue a certificate of absence to relatives of over 65,000 people who went missing during the civil war and the Marxist uprising.

Further, the Office on Missing Persons (OMP), which was a proposal by Prime Minister Ranil Wickremesinghe, was created. The OMP bill faced challenges from some members of parliament, but with the support of all the key parties, the legislation was passed in Parliament. The road to OMP can be viewed on a timeline here.

Although Sri Lanka now has legislation establishing a permanent body to investigate these cases, no official figures are available on the exact numbers of disappearances and the missing in Sri Lanka. The recently concluded Paranagama Commission received over 25,000 complaints of missing persons. Over the years multiple commissions have received thousands more complaints. This means thousands across Sri Lanka continue to search for answers.

In many instances family members go from one investigation to another, clinging to the hope of finding their loved ones or at the very least getting answers. The search, despite the many difficulties and challenges, is a basic ask: what happened to my loved one?

What is the OMP?

The OMP is an independent office with seven members appointed by the president on the recommendation of the Constitutional Council. The members of the OMP are meant to be independent individuals with expertise on human rights, international humanitarian law, humanitarian issues, fact-finding among other areas. There is also a fixed term of three years and limitation of two terms per member.

The office will be headquartered in Colombo with the option of having field offices. Many victims have been vocal that the OMP must have field presence which will facilitate access for them to engage with it.

The OMP has the mandate to trace, search and investigate into complaints brought before them on cases of both the missing and disappeared. Due to its permanent nature, there is no fear of whether the mandate will be renewed or not, as faced by many other commissions. This provides for the OMP to conduct investigations thoroughly and not be rushed by any deadlines.

The legislation provides for a tracing unit but specifies that the OMP also has the discretion to establish other units or divisions, ensuring that the office is able to obtain the necessary expertise and technical assistance required to investigate into cases, some spanning decades.

How is the OMP different than past initiatives?

Sri Lanka has had a long list of state-driven investigations including numerous commissions of inquiry. Several have solely been on enforced disappearances and/or missing persons. Thousands of people have gone before these numerous initiatives, recounting past events and abuses, and in many cases have done so multiple times, going from one investigation to another, repeating experiences to multiple persons and entities.

For most, their questions remained unanswered. Such experiences involved complex emotions of hope, frustration, anger, fatigue, anticipation, disappointment and much more. For many, state initiatives by successive governments have failed and there is no trust another commission will make a difference.

But the OMP is different to past initiatives because:

Why is the OMP important now?

Successive government have attempted and failed to provide answers to a significant number of people from across Sri Lanka on the whereabouts of their missing loved ones. Investigations, inquiries, committees and commissions over the years have all failed in this basic task of finding answers. Despite the lack of confidence with such initiatives, thousands continue to engage with the hope that the next initiative may provide answers. Failures with past initiatives and structural flaws are the very reasons for a new entity with the necessary powers to investigate and find answers.

The OMP provides a chance to correct these wrongs. This is the time to go beyond the rhetoric and to establish a mechanism that can finally, after years of failed attempts, provide answers to the thousands still searching for their loved ones. It is also finally an opportunity to say “never again.”