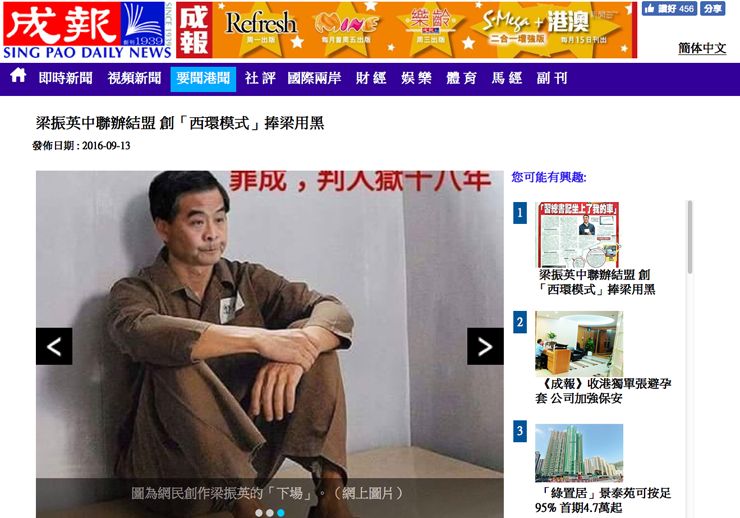 In Hong Kong, you're either from the pro-Beijing camp and supportive of the central government of China, or from the pan-democracy camp and for less central control from China. But for three weeks, one of Hong Kong's oldest newspapers has been blurring the line.

Sing Pao Daily, which is otherwise known to be pro-Beijing, has been running anonymous critiques of the city's top leader, Chief Executive Leung Chun Ying — who came to power with Beijing's blessing — and the powerful Liaison Office of the Central People's Government, which is Beijing's top representative body in Hong Kong.

Some critics believe the shocking move from Sing Pao Daily shows fissures within Hong Kong's pro-Beijing camp and represents views from a powerful sector within the pro-Beijing camp that has been marginalised by the chief executive and the Liaison Office.

Specifically, the paper has accused Leung of “inciting” independence in Hong Kong and cozying up with members of organised crime or the Triad. The anonymous commenter has also accused the Liaison Office of interfering in Hong Kong's domestic affairs and manipulating local legislative elections by supporting groups that divide the pan-democracy camp.

On September 12, a commentary in the paper went so far as to claim that Leung was part of a “Gang of Four” trying to destablise Hong Kong. The Gang of Four is a term used for four Chinese Communist Party officials who became incredibly powerful during the latter part of Mao's Cultural Revolution (1966–76) and were later charged with treason.

The next day, Sing Pao published a widely spread netizen-photoshopped picture of Leung sitting in a prison cell (see top photo) with a commentary attacking Jiang Zai Zhong, the CEO of the media group Ta Kung Pao, for turning his newspaper into Leung and the Liaison Office’s mouthpiece.

Leung dismissed the newspaper's accusations and simply said “it was not worth commenting on – you know what is going on very well.”

But no one really knows what is going on.

Some analysts believe the continuous anonymous critique is meant to ‘bombard’ Beijing with discontent and will not stop until Beijing finalises the list of candidates for Leung's replacement in the 2017 chief executive election. Leung was selected by a 1,200-member election committee with Beijing's blessing as the city's chief executive in 2012.

Others believe that the newspaper wants to drive home the need for an ongoing corruption investigation into the Liaison Office to deliver results. Since January 2016, a team from China's Central Commission for Discipline Inspection has been investigating the Liaison Office, looking into their financial records and reviewing the effectiveness and functioning of the Beijing body in Hong Kong.

Soon after the first commentary was published, various other newspapers in Hong Kong, including Wen Wei Po which is run by the Liaison Office, fought back and attempted to discredit Sing Pao, by attacking its owner. They published news reports accusing its chairman, Gu Zhuheng, of being a “fugitive” who was involved in an illegal money lending platform and is wanted by police in the Chinese city Shenzhen. Gu denounced the accusation, claiming that it was “false” and “libelous”.

Gu Zhuoheng took over Sing Pao Daily, one of Hong Kong's oldest papers, by injecting capital into the corporation when the paper was on the verge of bankruptcy in August 2015. At the time, people in Hong Kong believed that Gu was backed by the Beijing government in taking over the paper, in order to strengthen the Chinese Communist Party’s (CCP) control over media in Hong Kong. The Liaison Office already runs three newspapers in Hong Kong and most big media houses are editorially aligned with the pro-Beijing camp.

The first front-page commentary, published on August 30, created an uproar for holding Leung accountable for the rise of the independence movement in Hong Kong. Here's a translation courtesy of Hong Kong Free Press:

The paper then urges the Central Commission for Discipline Inspection (CCDI) to investigate Leung and the Liaison Office over power abuse:

Hong Kong society expects the CCDI to investigate the work and the role of the Liaison Office along with a recommendation to disband the group that hurts the interests of the country and Hong Kong.

Sing Pao’s opinion actually echoes the view of many people in Hong Kong, who sarcastically labelled Leung as the father of Hong Kong's pro-independence movement, as he kept making public speeches on the “non-existing” separatist tendency.

According to the “one country, two systems” principle underwritten in 1997, when Hong Kong was handed back to the people of China from the UK, the city's capitalist system and its way of life would remain unchanged for 50 years until 2047. But Beijing has been showing signs of impatience in recent years, encroaching more and more on Hong Kong's internal affairs, including disqualifying pro-independence candidates from elections and deploying strategies that split the pan-democrat votes and weaken their camp, which unlike the pro-Beijing camp, supports less central control from China.

Sing Pao ran another commentary, two days before voting in local elections began on September 2. The piece criticised Leung and the Liaison Office for providing resources and assistance to a pan-democratic political group called Youngspiration. The group is running against Scholarism, a student activist group behind the series of pro-democracy protests in 2014, known as the Umbrella Revolution. The paper also made accusations that a number of the group’s key members came from a non-profit organisation that is affiliated with Lau Nai Keung, a pro-Beijing businessman who is a member of the National Committee of the Chinese People’s Political Consultative Conference. But Youngspiration has denied any linkage to Lau.

The anonymous commentator then questioned why Leung banned six pro-independence candidates running for legislative elections, but allowed members of Youngspiration to run the race, given that the group has openly claimed to support the self-determination of Hong Kong.

This was not the only time local elections in Hong Kong have seen the sudden rise of “radical” political groups within pan-democrats. For example, during the district council election in 2015, Anthony Cheng, who is connected to a pro-Beijing businessman, was offering election funds to new political groups, which had the potential to compete with other pan-democratic parties.

Cozying up with the Triad

Sing Pao continued to bombard Leung and the China Liaison Office after the legislative elections. After newly elected lawmaker Eddie Chu received a death threat, Sing Pao accused Leung of actively seeking the Triad or organised crime's support when he started his election campaign in 2012.

The paper reminded the public of a dinner in February 2012 in which Leung and his election team were sitting with a dozen representatives of the indigenous rural community, two of whom are believed to be aligned with the Triad. The dinner meeting was Leung’s election campaign.

Leung did not shy away from the Triad after coming into office, which analysts say has undermined the rule of law in Hong Kong. After Leung became the chief executive, in August 2013 members of the Triad were called to stop anti-government protesters from approaching a town hall meeting that Leung was attending. During the pro-democracy protests in 2014, members of the Triad were mobilised to attack sit-in protesters in Mong Kok.