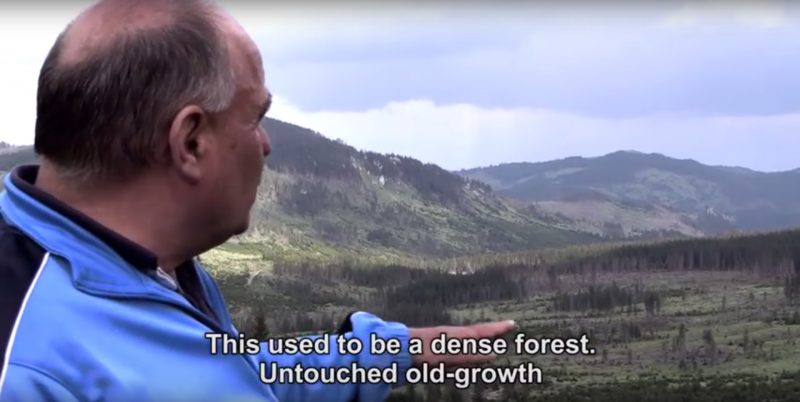 A screen shot from ‘Clear Cut Crimes’ documentary by OCCRP and RISE Project.

Earlier this week, journalists from the Organized Crime and Corruption Reporting Project and the RISE Project published a new documentary studying the effects of illegal logging in Romania and Ukraine. The film, titled “Clear Cut Crimes,” examines the collusion of illegal and legal businesses that are devastating the last of Europe's primeval forests.

Clear Cut Crimes is a 42-minute documentary film shot over a period of one year in the Carpathian Mountains. Our investigation follows the money to expose the crime of illegal deforestation, an activity that risks environmental disaster and is worth hundreds of millions of dollars.

The major Austrian timber firm Holzindustrie Schweighofer is positioned as a main beneficiary of the practice, having built a wood-processing capacity in Romania that exceeds that country’s legal wood-harvesting quota.

Schweighofer feeds off a destructive system devised by criminal groups involved in illegal deforestation. These groups work in cahoots with corrupt politicians who assist the thugs in expanding their unlawful logging businesses. They use poor people as fronts for their companies and will run a bulldozer over anyone or anything standing in their way. In the meantime, law enforcement sits on the sidelines as the violence unfolds.

The film also documents the efforts of the Cossack Battalion, a paramilitary group that fights against the logging mafia at the border with Ukraine. The organized crime network that exports wood from that side of Carpathians into Romanian factories, the battalion argues, “is supported by corrupt officials in Kyiv.”

In Romania and elsewhere in Eastern and Central Europe, the deforestation has amplified the deadly effects of floods in recent years. Analyses of floods in Bosnia and Herzegovina, Serbia, Bulgaria, and Macedonia have pointed out that the effects would had been far less severe if the nearby forests had not been cut down.

Besides feeding the construction and furniture industries, illegal logging is also directly connected to local poverty. In Macedonia, which lacks a gas supply network, many families use illegally cut and thus cheap wood for heating during the winter, as they cannot afford electricity or diesel fuel. Political corruption plays a major role at this small-scale level, too.

A video shot prior to the 2009 local elections in a village near Strumica shows the candidate nodding with approval when a local apparatchik tells the villagers that they would be free to cut wood in the nearby forest, if she were elected mayor. The candidate, Silvana Boneva, a long-term member of parliament, didn't win her race that year.

Leaked wiretaps show that Ms. Boneva's party exhorted businesses (in her town and with her knowledge) in subsequent elections on a massive scale. Currently, she is a member of the State Election Commission, in charge of ensuring the validity of upcoming general elections in December.