One Australian Nurse's Stirring Response to the Refugee Crisis 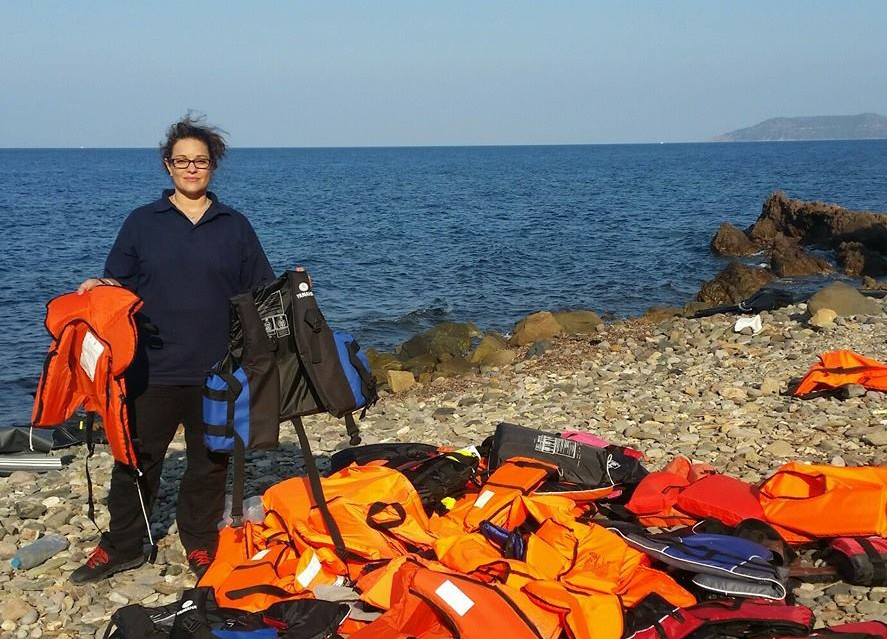 Helen Zahos’s humanitarian work as a volunteer with refugees is a powerful example of how individuals can make a difference. She is an emergency nurse and paramedic born in 1977 in Darwin, the capital of Australia’s Northern Territory. She grew up on Groote Eylandt in the Gulf of Carpentaria, where her Greek migrant parents worked for the island’s mining company.

She completed high school, a bachelor's in nursing and paramedical studies in Darwin. Helen has been a registered nurse since 1999 and a paramedic since 2000. She has a passion for indigenous health and worked in the remote aboriginal communities of the APY Lands from 2006 to 2009.

Helen has extensive experience as a volunteer. In November 2013 she was deployed to the Philippines as part of the disaster response following Typhoon Haiyan. The year 2014 saw Helen's focus shift to refugee health and advocacy as she was employed on Christmas Island at Australia's asylum seeker detention centre. Whilst on vacation Helen volunteered in Greece during the financial crisis with the organization Medecine du Monde Grece, assisting pensioners and the underprivileged with medical care. She also worked at the Nauru detention centre.

In April 2015 Helen volunteered on disaster response to the Nepal earthquake with the Non-Nepalese Residence Association, reaching remote areas in Ghorka and Ahrket. In August 2015 as images of refugees flooded social media, Helen campaigned to raise money for medical supplies, leaving in September to volunteer in Greece with Medecine Du Monde Grece on Lesbos Island. There she saw thousands of refugees fleeing Syria and surrounding countries and assisted with their medical care. Australia’s Neos Kosmos newspaper covered Helen’s activities in October 2015:

Later Helen moved her efforts to the border of Macedonia (FYROM) and Greece where she was present for the first border closure and the subsequent riots that occurred soon after.

Since returning to Australia, Helen has raised money to ship emergency equipment to Lesbos, donated by Ambulance Victoria. She is currently working as an emergency nurse at a Gold Coast hospital in Queensland.

After a wide-ranging video conversation, Helen kindly answered some written questions about her experiences.

Kevin Rennie (KR): Tell us about growing up in the Northern Territory. How did your formative years, especially those on Groote Island, help to prepare you for your work as a humanitarian volunteer?

Helen Zahos (HZ): Groote Eylandt in the late 70’s and 80’s was a great place to grow up as a child. It was a small community that had a warm community spirit and I grew up being a part of that community focus. Organizations such as the Lions club and Girl Guides were very active on the island and there was always a fundraiser of some sort that I was involved with. The Groote Eylandt mining company was the main source of work on the island, which attracted many workers from diverse backgrounds from the local indigenous people to migrants from all over the world. This meant that my classmates at Alyangula Area School were all from different backgrounds and cultures.

KR: In one of your video interviews, you said, “refugees are human beings… like you and me”. Please share some of your encounters that illustrate this.

I spoke with teachers that fled at gunpoint and hoped to resettle in Germany and one day teach gymnastics again. I had a professor from a university who helped me one day in the tent/clinic where we saw hundreds of people. As our interpreter was sick that day, he helped interpret and was mortified and embarrassed that he had been wearing the same clothes and had not changed his socks for 3 weeks.

I spoke with a mother who was a teacher, her husband a lawyer, and she was pregnant and had a 4-year-old boy with her. She had left her husband behind.

I helped a lady who had brought her own chemotherapy, having had dad go through chemotherapy before he died. I couldn’t believe we were setting this up in a dirty, dusty tent with no machinery or monitoring equipment, no blankets or cups of tea to help this woman’s therapy be more comfortable. How cruel… everyone had a story and everyone you could relate to.

KR: You have referred to the sense of betrayal among some Greek people who see your work with refugees as a threat. What ways might help to bridge this gulf?

HZ: There are many reasons why some local Greek people see refugees as a threat and I guess fear is the biggest precipitator of this. I have had many people make comments like ‘why is she helping them (the refugees) and not the Greek people that are suffering from the financial crisis?’ Often people that make this comment don’t realize that I have volunteered specifically for the local Greek people in a polyclinic where pensioners and the underprivileged could access healthcare and medication. I have sent equipment and supported local first aid organizations that support Greek people.

I think the situation at the moment is dire in that refugees trapped in Greece by the border closures do not want to be in Greece. They were aiming to go to other countries in Europe with better job and education prospects than Greece can provide and unite with family members. Many local Greek people do not want the refugees in Greece as they fear loss of jobs, increase in crime and the government having to handout money for housing, food and medical services, in a country already struggling with its own financial pressures.

Until there are more definitive answers on what is going to happen with the 80 thousand plus refugees stuck in Greece, then the local people’s views will not change. Many Greek people remember the war where it was the Greeks that were arriving on boats in the thousands, it is for this reason that many older Greek people are tolerant and understanding of the situation and are empathetic with the Syrian refugees.

KR: To what ways did your time at the Christmas Island and Nauru asylum seeker detention centres influence your decision to volunteer?

HZ: My time working at Christmas Island and Nauru allowed for me to speak with refugees and asylum seekers, hear their stories and gain an understanding of what they were fleeing from. Had I not spent this time at the detention centres, I don’t think I would have fully understood the impact of what was happening. I gained insight and knowledge of the resources and processes involved on Christmas Island especially when one small boat arrived with asylum seekers. Seeing images of thousands arriving on the Greek islands in a mass exodus, I knew that help in the form of manpower was needed urgently.

KR: How did you find the French NGO Médecins du Monde and why did you choose to work with them? What is special about their community?

HZ: When I was working on Christmas Island in 2014 and I was headed to Greece for a holiday, I felt the need to use my skills as there were reports of Greek people suffering (particularly pensioners) in the Greek financial crisis. My conscience did not sit well with going to Greece and holidaying when its people were suffering so I simply looked up volunteer organizations that needed nurses. I contacted them via email and it was as simple as that. I went through their extensive application process.

KR: What have you learnt about yourself, and about others, during these challenges?

HZ: I have learnt that not everyone is as caring; that the term ‘refugee’ is a dirty label that strips people of their identity. I have learnt that when a natural disaster happens the whole world turns up to help in full force, such as the Nepal earthquake or the Philippines after typhoon Hyan, but when the disaster is a result of war, no one turns up except civilian volunteers and non government organizations.

I learnt about the spontaneous volunteers and how they impacted negatively on the efforts of the teams on the ground, as they were well meaning but uncoordinated.

I have learnt that the refugee crisis is political and that the Australian public is so far removed from the situation. I have learnt that Australia is such a large country and yet they cannot accommodate 1000 or so refugees that are stuck in offshore detention centres and are using these people as a political pawn in a game that these innocent people have no control over.

I have suddenly become an advocate. As a nurse we are taught to be a patient advocate, suddenly I was in a situation where these people needed support and the public needed to be made aware of what was happening.

I have learnt to look at the one person in front of me that I am caring for and not the 5 or 10 thousand as it can be overwhelming. I have also learnt that a lot of people chose not care and chose not to take notice.

I now look back and remember that moment when I lay there in bed looking at those images on social media and thinking ‘ I can do something, I can go and volunteer’. Now that I have returned I am realizing the impact of the situation on me, and that you can come up with an idea and follow through and have a positive impact on people. That you don’t have to be special or skilled. You just need to be passionate and care and things just fall into place and you just have to hang on for the ride.

KR: What advice do you have for those who want to change the way the world is treating refugees seeking a better, safer life?

HZ: For those people supporting refugees and wanting to help them have a better life like they deserve, I say stay strong and stay true to yourself. There are so many hate stories and politicians filling people with fear. It is easy to be hurt by words that are said or disheartened, but then there will be a story or you will meet someone with an amazing story of courage and it reminds you of why you feel so passionately about helping refugees.

You can find out more about Helen’s volunteer work in a number of videos. Antony Shows posted the following interview in April 2016. It also has a Greek language clip.

Web-based Meraki TV also spoke with Helen in August 2016. Her interview starts at 16.45.

Recently Helen caught up with cafe owners in Darwin who had raised money and supported her when she left for Greece. They wanted to get back to fundraising again with the result being that she will fly over and spend the money in the camps where needed.

She has also established a Facebook page for those wishing to help: Aussie Volunteers helping Refugees in Greece.

Thanks to Global Voices’ Asteris Masouras from Thessaloniki, Greece, for getting us together.