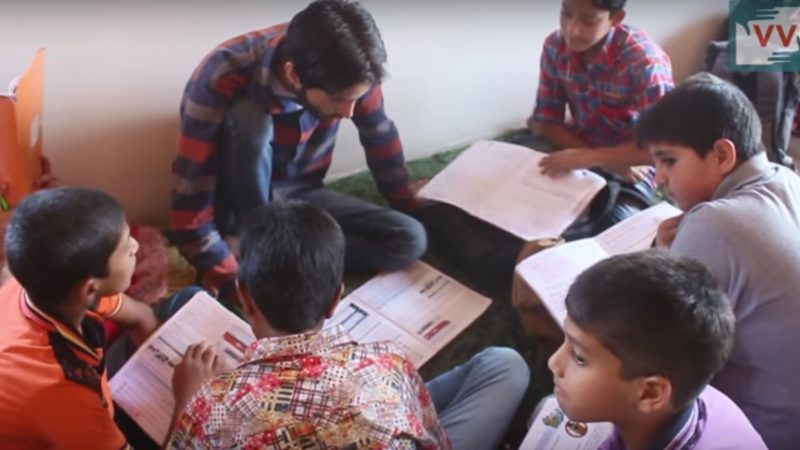 The youth of Kashmir has stepped in to educate the children of Kashmir in ‘Curfew Schools’ for free. Screenshot from YouTube Video

This post originally appeared at Video Volunteers [2], an award-winning international community media organization based in India. An edited version is published below as part of a content-sharing agreement.

The local community of Srinagar, Kashmir, in northern India is supporting its children’s education despite the continuous conflict [3] of the last couple of months.

The valley’s millions of students have been unable to attend school regularly due to the constant state of unrest there since the July killing of [4] Burhan Muzaffar Wani [5], a commander of the Kashmiri separatist group Hizbul Mujahideen. The heavy presence of paramilitary forces and curfews have shut down schools, business establishments, and other government offices in the valley.

Among those who suffer worst are the children [6], who have been confined to their homes and denied their right to education.

In these testing times [7], young people have stepped in to educate the children of Kashmir in ‘Curfew Schools’ for free. These community schools were started in August [8], and the teachers are young volunteers from across the state from all kinds of professional backgrounds.

“Since the schools are shut, I’ve joined this centre to study so that I am prepared for my exams,” Aabid Hussain told Video Volunteers community correspondent Shafat Mir Hussein [9] in Srinagar, Kashmir. Aabid is one of hundreds of other Kashmiri children being tutored at these makeshift schools run from individual homes, mosques, community halls, creating a safe haven for children to continue their education.

Despite broad international law which mandates that parties of armed conflicts spare civilians as much as possible, the lack of explicit standards or norms protecting schools and universities from use in support of the military effort means that fighting forces often make use of such education institutions for various purposes.

Even as the state’s Education Minister Naeem Akhtar directed the Kashmir State Board of School Education to prepare for school-leaving exams [10], reports surfaced of military forces occupying school [11]properties in Srinagar.

As countries celebrated the 50th International Literacy Day [12] on September 8, promising a good education and future for their children, millions of children [13] across the world continue to suffer due to conflict. The recent clashes between Kashmiris [7] demanding independence and the paramilitary forces have left 82 dead [14]and more than 1,000 injured in the state.