Could an Ousted Crime Show Host Be a Symptom of a Bigger Problem in Trinidad & Tobago? 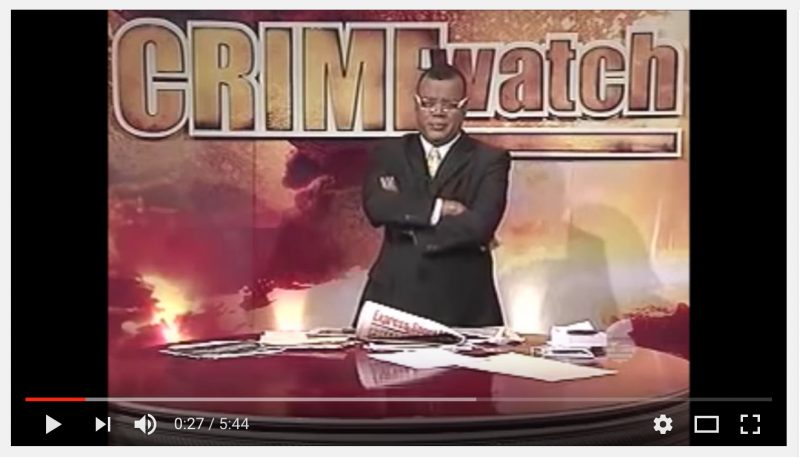 A screen grab of the opening segment of a ‘Crime Watch’ episode posted on YouTube, hosted by Ian Alleyne.

Crime is a hot topic in Trinidad and Tobago, and Ian Alleyne, self-appointed champion of the people as the star of ‘Crime Watch’ — one of the country's most watched “crimefighting” shows — is arguably even hotter. His popularity has not waned, despite controversies like his decision to broadcast footage that showed the rape of a minor or his arrest earlier this year on the grounds of obscene language and resisting arrest (albeit at the hands of a police inspector, Roger Alexander, who hosts a rival crime show, ‘Beyond the Tape’).

At the start of September 2016, CNC 3, the network that aired ‘Crime Watch’ and which had run a news story about Alleyne's arrest (conveniently editing out the expletives he had used against the police officer in question), announced that it was dropping the show. This was not the first time for Alleyne; his contracts with two other networks had also been terminated.

The blogger Mr. Live Wire at snarky news site Wired868 was immediately on the ball, explaining that the media house decided to part ways with Alleyne after he did “a so-called exclusive investigative report on construction work at the Brian Lara Stadium”, which prompted legal action — against both the show and CNC3 — from state developer Urban Development Corporation of Trinidad and Tobago (UDeCOTT), which worked on the stadium's construction.

The post feigned surprise at Alleyne's “irresponsible claims against the government”, reminding readers that the TV host had previously contested an electoral seat for one of the parties that is now in opposition. (Prior to that, in 2002, Alleyne had unsuccessfully run for the Chaguanas seat for the party that is now in government.)

Although the cancellation of the show on CNC3 has netizens talking more than ever about its controversial host, the discussion has also begun to encompass wider issues — including the country's rising crime rate, the socio-economic gap between those with means and the dispossessed, the lack of public trust in the police and the judiciary, and the media's culpability in sesnsationalising violent crime — all of which have created a climate for this type of programme to thrive.

Meanwhile, Alleyne himself was busy extending olive branches and doing damage control on his Facebook page, posting a video announcing that he was building his own studio and asking fans to support the show by sending in monetary donations. The post's comments thread was filled with messages of admiration and support; fans were clearly looking forward to the return of the show, although Alleyne did not specify on which platform it would be available for viewing.

Facebook user Eric Ribeiro, however, said of the whole debacle:

Like all talk shows Crime Watch serviced a select group of people who found Alleyne to be interesting, amusing and effective. No one can be faulted for their taste in entertainment or otherwise. Where Alleyne went wrong is in miscalculating the value of his support and as we say here in Trinidad, taking basket from social media animals whose only worth to him is stoking the fire against his employers, a battle he was bound to lose. After being fired three times will he learn? Not if he keeps doing the same thing and expects different results. I genuinely wish him well.

Another netizen, Crystal Lowe, was of the opinion that Alleyne's wavering political loyalties finally caught up with him, but what caught the attention of many others was the Media Association of Trinidad and Tobago's (MATT) statement about the discontinuation of the show on the CNC3 network:

While some viewed Crime Watch as sensational reality TV, the show also served a significant public interest. Many viewers relied on it as a window into communities that are relentlessly besieged by inadequate social services and a wide range of crimes, most of which are ignored by the traditional media. The programme on one hand bordered on exploitation of vulnerabilities while on the other hand it offered visibility and voice to citizens who were otherwise unable to access formal and timely redress through law enforcement and the judiciary. […]

MATT hopes that should there be a fourth incarnation of Crime Watch, its best elements that serve the public interest could be reinforced and its weaknesses addressed by consistent and meaningful investment in journalistic best practice.

MATT also rejected accusations that its statement was in any way compromised because its president works at CNC3 on a freelance basis.

While the wildly popular satirical website The Late O'Clock News poked fun, activist Brendon O'Brien, at his Activized blog, made the argument that although he detests the show, its cancellation may actually be compounding an already bad situation:

In a Facebook post Ian Alleyne posted days ago (which, conspicuously, can’t be found), he asked supporters of his show to come to the offices of CNC3 to support him in his fight against what he seems to consider censorship. According to him, the station intends to ask him to sign a contract demanding him to no longer critique the present government. This comes after him insinuating that the wives of two Government ministers benefited from multi-million-dollar contracts at the Brian Lara Stadium […] Since then, government minister Colm Imbert has done more than deny Alleyne’s statements.

Now, his show has probably been a political advertisement pretending to be superhero talk show for a while. That’s not the scariest part for me. The scariest part is that he’s played the ‘free speech champion’ before, and rallied people to his cause.

Ian Alleyne represents a collection of unfortunate truths about Trinidad and Tobago; we don’t trust our justice system, nor do we trust our government officials, but have all-too-much faith in those who pander to us (extra points for obnoxiousness). It doesn’t hurt him in the slightest that media houses are eager to betray their own ethics for a chance at the ratings that he brings…assuming our local media houses have ethics to begin with. […]

It is in these moments – when he is off the air – that Ian Alleyne truly shows his strength as a personality. He’ll rally the people, and strike the fear of the Almighty Dollar into one media executive or another. He’ll likely end back up on the air, at some other TV station if not CNC3. Not because it’s the responsible thing to do, but because enough of his fanatics will throw themselves in the street for him if he demands it, and because every second he’s not on the air a TV advertising spot devalues.

But this says even more about us than it does about Ian. CrimeWatch has been on the air since 2010. In just those 6 years, he’s shown graphic images like the corpse of an infant and the rape of a minor […] and we never once realized that this is not the sort of person we need parading our nation, pretending to be our hero.