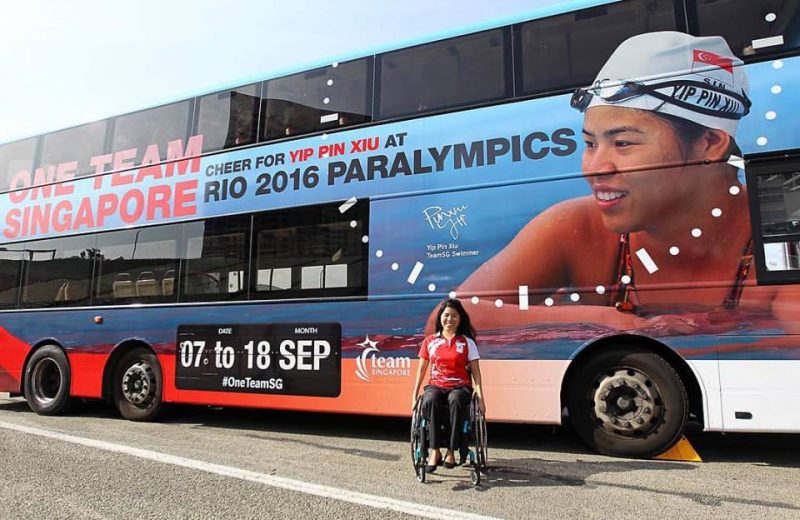 Singaporean swimmer Yip Pin Xiu, who was born with a muscular dystrophy, won two gold medals in the 2016 Paralympics. She is assured of receiving 200,000 Singapore Dollars (146,000 USD) for each gold medal she won in Rio de Janeiro.

But her supporters are asking the government to give her at least $1,000,000, the same amount received by swimmer Joseph Schooling, who won a gold medal in Rio last month. Aside from defeating the legendary swimmer Michael Phelps, there was the small matter of Schooling's gold medal being the country's first at an Olympics.

Some Singaporean netizens want equal treatment for Olympians and Paralympians. Some even reminded authorities that it was Yip Pin Xiu who gave Singapore its first gold medal in the 2008 Beijing Paralympics.

At that time, Senior Parliamentary Secretary Teo Ser Luck explained why the reward money for Paralympians is smaller than what is given to Olympic champions:

I am glad it was a smaller field — I am glad because each of those six competitors had a disability no one wishes on them. But it is also a bigger field – the six only represented the many others with more severe disabilities that could not possibly have gotten them into competition.

In the end, we cannot measure (or reward) human endeavour by money alone but withholding it sends a wrong message to society too. After all, as a taxpayer, I pledge my share of it to all society and to that end, in principle, I want Yip Pin Xiu and other disabled athletes to get the same rewards.

The opposition Workers’ Party also supports the clamor to improve the compensation for Paralympian champions:

The smaller pool of competitors at the Games should not be reason to deny our Paralympians the recognition and compensation that is due to them. It is only right that they should receive equal treatment as any Singaporean athlete who competes at the highest international levels.

For her part, Yip Pin Xiu is not bothered by the smaller amount of money she is going to receive but she rejects the argument that athletes like her are inferior to those who competed in the Olympics.

There are also people being negative and saying that (my Paralympic gold medal) cannot be compared (to Schooling’s Olympic gold) because they don’t think para—sports is the same as able—bodied sports.

My answer to [critics] is that we put in the same amount of effort to get to where we are and it’s not easier being in para—sports.

So, people who are comparing are missing the point here. Because sports has the ability to unite people. Joseph’s gold medal brought Singaporeans together. Hopefully, with this Paralympics gold medal, it would also be able to do the same. That’s the magic of sports.

Funny how #YipPinXiu isn't getting the glory she's supposed to get despite clinching two gold medals at the Paralympics.

Yip Pin Xiu deserves more recognition than Joseph Schooling tbh. she broke her own world record. why isn't anyone talking about her.

Public pressure may yet persuade the government. After winning a gold medal in 2008, Yip Pin Xiu was only supposed to receive $100,000 but it was increased to $200,000 after the government yielded to popular opinion.