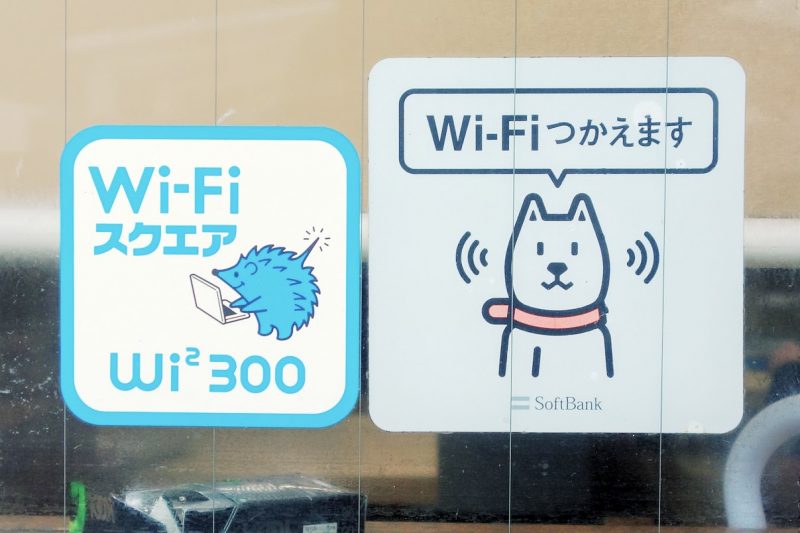 If you're searching for free wifi in Japan, these stickers advertising the availability of subscription-based wifi will leave you briefly hopeful, and then bitterly disappointed. Image adapted from original by Flicker user nicolasnova. (CC BY-NC 2.0)

Japan's government has recently promised to address one of the greatest scourges of modern life in that country: the almost complete lack of public WiFi hotspots. Unfortunately for Japanese residents, the fix will only be available for tourists. If you live in Japan, you'll still be out of luck. And this has left some Japanese Twitter users disappointed.

While open WiFi hot-spots are quite common in many Western countries such as Canada and the United States, in Japan, until recently, WiFi access at coffee shops, malls and other public places could only be accessed as part of a pre-existing mobile phone contract.

Foreign visitors to Japan will almost never come equipped with a smartphone plan, so getting access to Wifi has been a major challenge, and figuring out how to access WiFi is one of the most common questions tourists have when planning their visit to Japan.

As part of its preparations for the 2020 Tokyo Olympics, the Japanese government has been working on deploying free WiFi hotspots all over the country. At the moment free public WiFi exists in a patchwork of locations, mostly in major airports and in larger cities such as Tokyo and Osaka, or major tourist destinations such as downtown Kyoto. If you're visiting anyplace more-or-less off the beaten track, it's tough to find free WiFi hotspots.

On September 16, the Japanese government announced it would work with Japanese telecoms provider KDDI to provide WiFi hotspots all over Japan.

It'll be really convenient when tourists to Japan can easily sign-up for and access WiFi all over the country. Now, no one will leave Japan with bad memories of trying to connect to  the Internet. Can't wait for more hotspots in restaurants and coffee shops. If there's web access they won't have to buy any more magazines!

This is a good idea. However I want them to make this service available for (Japanese residents), too! Article: Free WiFi Access Across Japan Via Registration

Make this available for Japanese people, too. I guess I can tether from my phone but sometimes that's not good enough!

The decision to expand WiFi across Japan has been a long time coming. On one discussion board News Picks, the top-ranked commenter said:

Until now (when it comes to free public WiFi access) Japan as a country really looks like it's living in the past. Increasing free public WiFi access (across the country) is great. The only reason (a number of issues like WiFi) are being addressed is because of the Olympics… We ought to hold giant events like the Olympics every year just so we can get anything improved at all in Japan.

Still, for many visitors to Japan, the initial high-speed WiFi rush of the airport is a revelation in and of itself:

Okay, I knew Japan was the first country in the world for internet, but their airport wifi is INSANELY FAST. <3 pic.twitter.com/WdvEhm7ehg