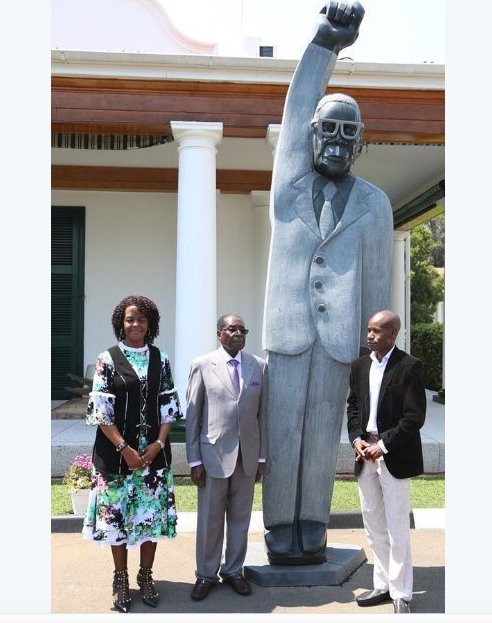 Zimbabwean President Robert Mugabe, First Lady Grace Mugabe and sculptor Dominic Benhura standing next to the statue. The image has been shared widely on Twitter. This one was shared by ‏@Quables.

The 92-year-old president has been facing street protests and sustained anti-government campaigns on social media by citizens frustrated by corruption, unemployment and cash crisis. The mocking of the statue is seen as an extension of internet-based opposition to his continued stay in power — he has served as president for 30 years now.

Lance Guma envisioned the future of the statue when Mugabe falls:

Good thing Dominic #Benhura made this ugly statue of #Mugabe. Citizens will enjoy knocking it down when he falls. pic.twitter.com/vQswJS5cH8

Twitter user Asura suggested that a dictator needs to have a better statue:

Seriously Mugabe,if your gonna be a dictator demand only the best statues to showcase you megalomania #MugabeStatue pic.twitter.com/g4giqhakh3

The next statue will probably be designed by a non-Zimbabwean, @ali_naka suggested:

Mugabe doesn't trust ZIM doctors, he will no longer trust ZIM sculptors after getting abused in this manner #MugabeStatue

Mugabe is known for traveling to Asian countries for medical treatment.

Another user compared the statue to one of the characters from American animated sitcom The Simpsons:

Man made Mugabe look like a Simpsons character😂😂😂😂 #mugabestatue pic.twitter.com/oMEIhnq6OS

This statue is UnAfrican – Mugabe is a victim of Sculptor Terrorism pic.twitter.com/OEbEkiUr9y

Mugabe's statue story tells us abt how his appetite for being hero worshipped has backfired. He gets lively at evry praise sign. Now watch

Mduduzi thought it was a miracle that the statue was approved:

We credit ‘effort’ in any endevour, but Benhura's statue of President Mugabe is so hideous it's a miracle it was approved

The sculptor, Dominic, did not survive the mocking:

The poor chap is probably at Chikurubi prison by now #MugabeStatue pic.twitter.com/UPk8BgUlDH

Chikurubi is a maximum security prison in Harare.

Grace Mugabe, the first lady, was not spared either:

I have no idea. Grace might have created this. Matches her dress sense 😂😂 #MugabeStatue #ThisStatue https://t.co/RW9FQmbyYp

When u know the sculpture ugly so you ask yoyr wife to dress uglier just to confuse the haters😎 yolo #MugabeStatue pic.twitter.com/sV3FnuH5y2

And what about a ring for each finger?

I showed my sister the picture of Mugabe's statue and the first thing(s) she noticed was the fact that the lady is wearing 10 rings.

In this photo, the first lady appears to be wearing a ring in all her 10 fingers.

Kgopolo Phil Mphela, however, came to the defence of sculptor Dominic Benhura: