The Bitter Aftertaste Left by Donald Trump's Visit to Mexico

Peña had invited both of US race's main candidates, though Democratic Party candidate Hillary Clinton declined.

The backlash on social media against Peña's decision to invite the controversial candidate was swift.

During his campaign, Trump has fueled animosity from Mexicans and Mexican Americans with regular disparaging comments about Mexicans. Trump's promise to halt undocumented immigration by building a wall along the southern US border has also angered people in Mexico. Many viewed the invitation as a foul move that underestimated Trump's disrespect for Mexico, while others saw it as yet another bad decision in a series of scandals now plaguing President Peña:

WE DID NOT INVITE YOU

Wednesday, 11 a.m.
Angel of Independence. Get Out Trump Get Out EPN [Enrique Peña Nieto]. Trump You Are Not Welcome. pic.twitter.com/YXrglcuNrB

I feel truly offended about @EPN‘s invite to @realDonaldTrump. Trump You Are Not Welcome. Get Out Trump Get Out EPN https://t.co/QQPJttF5f8

It could be a good strategy to bring #Trump to Mexico to expose him, but we know that #EPN is not a great strategist and so… the end.

Writing to his more than 75,000 followers on Twitter, columnist Gabriel Guerra argued that the invitation could be understood from two perspectives:

For #Trump, this is a campaign event, a propaganda stunt. For #EPN, it's the riskiest gamble of his administration. https://t.co/gilRVTqZgP

The meeting caught many off guard, leading to broad speculation about why it was happening at all.

The only thing that is missing is that they announce the accomplishment of the private  conversation with Trump is that the wall will be constructed by the Higa Group.

(The Higa Group is the conglomerate that has benefited from public construction contracts since Enrique Peña was governor of the State of Mexico. It is also the same corporation that transferred ownership of a lavish property to Peña's wife in a scandal known as “Casa Blanca.”)

JoseLo Herrera, for example, thought Trump would stick to his plans for a border wall:

Donald Trump is coming to Mexico to offer employment opportunities to all Mexicans. BUILDING THE WALL.

Trump landed in his private jet (often referred to as “Trump Force One”) at Mexico City International Airport around 1:30 p.m. on August 31, despite an apparent ban on private planes at this airport. He then traveled in an official helicopter operated by the Mexican government to Los Pinos, the presidential residence, for his meeting with the Peña.

While “the Don,” as Trump is known to some of his compatriots, stayed in Los Pinos, a small demonstration took place at the monument of the Angel of Independence, where about 30 people protested the arrival of the US billionaire. 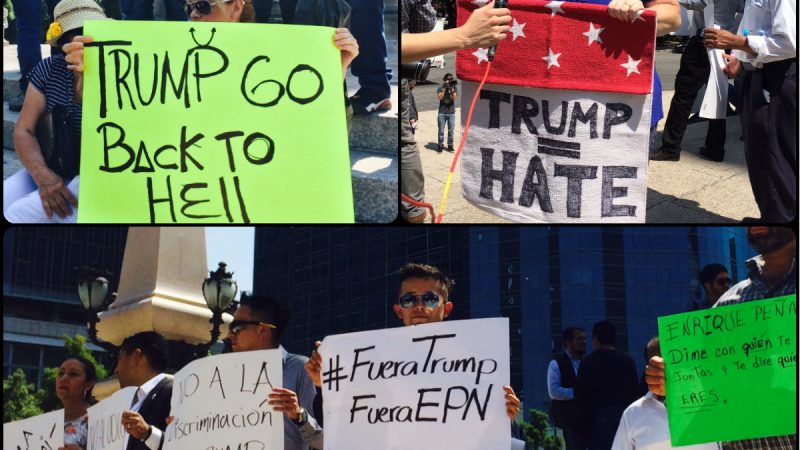 Protests in Mexico against the US Republican presidential candidate's visit. Images from the author.

After the meeting at Los Pinos, Peña and his guest held a press conference. According to the mainstream domestic media, Peña had asserted that “Mexicans deserve everyone's respect,” while the foreign media focused on the US candidate's response to a question about his infamous plans for a border wall: “The United States has the right to build a wall to stop illegal immigration, but who will cover the costs was not discussed.”

Trump is leaving Mexico without apologizing, without promising to respect the Mexican people, and without changing his anti-immigration platform in the least.

Ricardo Anaya, the leader of an opposing political force to that of Enrique Peña's party, said the following:

Instead of demanding an apology, the government allowed @realDonaldTrump to top off his humiliation of Mexicans. It is unacceptable.

Robert Valencia, a political analyst and Global Voices contributor, had this to say about the Mexican president's role during the meeting:

@EPN missed the opportunity to put Trump's feet to the fire, thereby furthering his image as a weak-minded leader.

In addition to the controversial invitation he extended to Donald Trump, Peña has also recently faced criticism after journalists published evidence suggesting that he plagiarized his university thesis. But in this case, the scandal claimed a high-profile casualty: Finance Minister Videgaray, a close aide to the president and who played a key role in orchestrating the meeting with Trump, resigned shortly thereafter.

This is an adapted version of the original post published in Spanish.