Mexican Protesters Have a Message for the President: ‘Resign Now’ 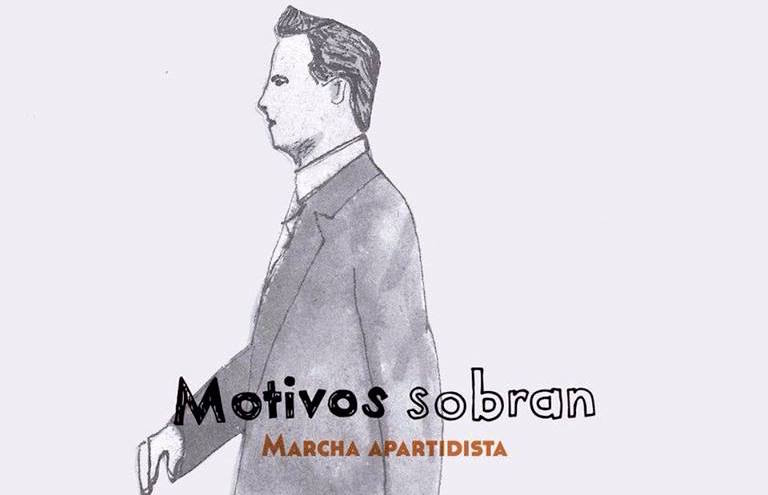 In Mexico City, the march began at 5:00 p.m. local time, assembling at the Angel of Independence and continuing to the Zócalo. The demonstration was timed to coincide with the president's customary “Cry of Independence” at the the National Palace, when the government remembers the beginning of the Mexican war of independence, marking the occasion with nationwide festivities.

Peña no va a gritar.
Va a renunciar.

Peña is not going to cry.
He is going to resign.

The march drew demonstrators from outside Mexico City, as well, including people in Guadalajara and Baja California Sur. On Facebook, organizers stressed that all kinds of people were welcome to join:

This march is peaceful and non-partisan. We welcome social movements, NGOs, individuals, families, journalists, [and] pets. If you are a member of a party, attend the call as a citizen, without campaigning. This is a march by Mexico, for Mexico.

Under the motto “reasons abound,” organizers emphasized stressed that the march enjoyed the support of a diverse array of civic groups and independent media, including the National Center for Social Communication, Coordinadora 1DMX, Morethan131, and others.

The #ResignNow movement's focus on civic, non-partisan activism in some ways resembles the #IAm132 movement, which emerged in 2012 in response to perceptions that the Mexican news media showed favoritism in its coverage of Peña Nieto's presidential candidacy.

Invitations to join this week's march in Mexico City started circulating on social media on September 2, a day after Peña delivered his fourth State of the Union address as president. He adopted a new format, holding a question-and-answer session, but many in the public nonetheless said the event seemed phony and mostly scripted.

According to Dario Brooks for BBC World:

The meeting resembled a well planned ceremony, with little room for improvisation.

Fact: The first question, that which opened the dialogue, was from a youth from Campeche (in the southeast of the country) who said: “Thanks to you we have, well, everything. I want to ask you, what other good news do you have for us?”

It went on this way for an hour and a half.

The president's poor performance came just two days after he controversially welcomed US Republican presidential candidate Donald Trump on an official visit for private talks. The invitation was enormously unpopular with most of the country.

Last month, the ratings for Peña Nieto's administration slipped to a new low, according to the journal Reforma: barely 23 percent of the country approved of his presidency, while a whopping 74 percent expressed disapproval. No Mexican president in the past 20 years has been so disliked.

In the following image, circulated online by Peña's critics, shows some of the most significant mistakes and scandals that occurred during the first four years of his presidency.

2013: Approving energy reform that was strongly criticized for considering the privatization of the oil industry and attacking the rights of villages and indigenous communities. 2014: The disappearance of the 43 student teachers from Ayotzinapa, as well as revelations about the “White House,” showing that the president and his wife acquired a luxurious mansion, valued at 7 million dollars, through a government contractor.

2015: The devaluation of the Mexican peso and the escape of “El Chapo” Guzmán.

2016: A report emerges arguing that he plagiarized at least 28 percent of his Bachelor's thesis, as well as and the controversial invitation that he extended to Donald Trump to visit Mexico

Four years have passed by; two to go.

‘We Don't Want Just Another March’

Before the march even took place, civic organizers were working to determine how best to mobilize for what would follow.

“We do not want this to be just another march” Work dynamic for the march #15s in the Zócalo. #RenunciaYa (Resign Now)

The #RenunciaYa (Resign Now) movement makes it clear that a large number of people in Mexico are eager to express their frustration with the presidency and the country's political class, as a whole. So far, crowds have demonstrated their readiness to reclaim, if only temporarily, major public spaces.

Whatever the president decides to do, the more important precedent could be the powerful deomonstraton of civic spirit. Columnist Adrián López Ortiz writes that “citizen power is scattered” but “real.” Ortiz says Peña will come to realize this, but Mexicans should be patient.