Havana Is a City That Lives and Breathes Beyond the Limelight 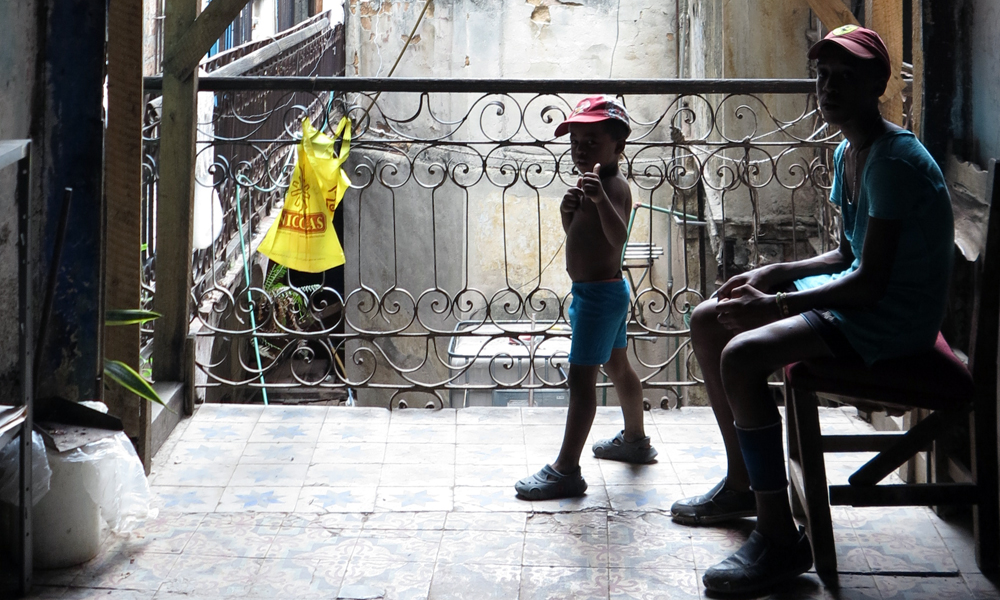 A family in a building in Havana. Photo: Mónica Baró, Periodismo de Barrio.

This story marks the beginning of Global Voices’ collaboration with Cuban digital media Periodismo de Barrio. With this partnership, we hope to bring our readers stories about Cuba that are different than those normally found in traditional media.

On December 7, 2014, at a ceremony in Dubai, the Swiss foundation New7Wonders revealed the results of an international competition organized to nominate “Seven Wonder Cities“. Among the favorites, out of more than 1,200 candidates from 220 countries, was Havana. Against somewhat skeptical, conservative forecasts, the Cuban capital won over iconic cities such as Barcelona, London, Athens, Kyoto, Prague and Mexico City to represent “the achievements and aspirations of our global urban civilization” along with six other cities. Havana, which is almost always portrayed negatively, is a city with enormous contradictions.

Ten days later on December 17, while Havana was still basking in the glow of the New7Wonders decision, the governments of Cuba and the United States — Cold War archenemies — announced the thawing of diplomatic relations. The island returned to the top 10 topics of discussion in the media. The secret negotiations between Raul Castro and Barack Obama perplexed many. The announcement generated uncertainties, hopes, disappointments, joys, ambitions, or curiosity, depending on how the discourse was interpreted. It also started a tourism boom on Cuba's side of the ocean.

The 2014 Statistical Yearbook of Cuba states that from 2009 to 2014, the number of visitors to Cuba increased by over half a million. In 2015, the country received 3,524,779 people, indicating a growth of 17.4 percent. In other words, the same amount of people visited Cuba in one year that had in the previous five, before the restoration of diplomatic ties between the US and Cuba on December 17 (referred to in Spanish as “17D”). Such growth brought in above 3 billion pesos in gross income (about 113 million US dollars), according to an article by economist José Luis Rodríguez and information from Cuba's parliament, the National Assembly of People's Power. So far, 2016 is breaking records. A publication from the National Office of Statistics and Information revealed that in January alone 417,764 visitors arrived in Cuba, nearly 47,000 more than in the same month of 2015. No wonder state media recognize tourism as “the most dynamic sector of the economy.”

Cuba has become fashionable, and Havana is a star in the world market. It is Cuba's largest city and capital, and attracts the most visitors. People do not visit just for its beaches or for its nature. Other Cuban cities are far more beautiful in this. Nor do they visit because it's the capital. They visit for the same reason that has inspired songs in different eras and genres. It has been the muse of Los Zafiros, Joaquín Sabina, Fito Páez, Carlos Varela, Gerardo Alfonso, Habana Abierta, Los Van Van, and Manolito Simonet. It is rare for anyone to remain indifferent to Havana. A visitor will either hate it or love it. Or both at the same time. The city is quite temperamental. Often complex, dysfunctional, unpredictable, and troubled.

It would be unfair to attribute all the credit to the boom to “17D”.

Famous figures in a famous city

Before the thawing of US-Cuba relations, well before the Swiss foundation's announcement, Amercian singer Beyoncé Knowles and her husband Jay-Z, a rapper and noted music producer, came to Havana to develop an educational exchange. It was in April 2013, when Cuba was still on the US State Department list of countries sponsoring terrorism. The fact that famous public figures visited Cuba, especially famous US citizens, was more of a low-profile jab than a trend promoted by the market and government policies.

But the couple, very consistent with their vocation of putting on a show, made sure not to go unnoticed. They walked through the historic center. They were photographed. They dined in private restaurants. They visited schools and artistic troupes. Beyoncé even took selfies with local fans, danced guaguancó and shared the stage with the illustrious Cuban cabaret showgirl, Juana Bacallao. Jay-Z almost always maintained the demeanor of a tough guy who should not be disturbed, although after returning to the United States he responded to a flurry of accusations from US Republican congressmen with a song about his experience (“Open Letter”), in which he said: “I'm in Cuba, I love Cubans. This communist talk is so confusing, when it's from China the very mic that I'm using.”

That, arguably, was one of the events that began to establish Cuba as a fashionable destination among celebrities who frequently appear on magazine covers. The power of the stars came before the White House. Although we must admit that Beyoncé and Jay-Z could not compete with Barack Obama's visit with his wife Michelle and daughters Sasha and Malia in March 2016. Not even superstar Barbadian Rihanna, who dazzled in the role of femme fatale on the streets of Havana, with her hair painted like fire and models of cars just as hot, while photographer Annie Leibovitz immortalized her image for the cover of Vanity Fair.

But indisputably the events that have mobilized the city in recent months are the free concerts of Olga Tañón, DJ Diplo, Major Lazer, and The Rolling Stones. Art, with its insurmountable power to summon, has legitimized the changes in political relations. 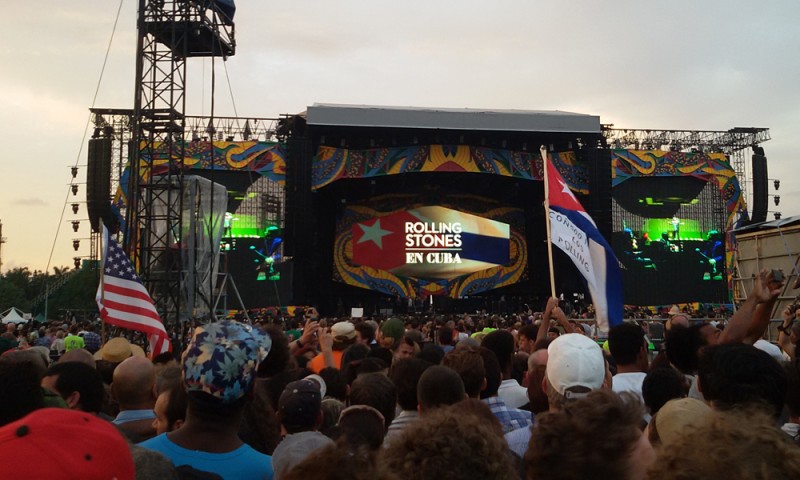 Among all the cameras and big headlines, it is sometimes overlooked that this city of contrasts is neither the picturesque collage promoted in advertising campaigns, nor the world constructed in so many photographs. It is a city that has lived. All of the buildings mortally wounded in their war against time were homes with families before they became another metaphor of decay.

Havana is the smallest province of Cuba and the most densely populated: 2,121,871 people reside in its 728 km², according to 2014 statistics, which do not include the directionless immigrant population in the capital — and these people, legal and “illegal,” are those who shape it.

“The city is made by the people who inhabit it and is defined by the interactions between those living in urban areas, which are, as we all are, social constructions,” according to The Many Havanas: Strategies to Understand its Social Dynamics, published in 2014. Architect Mario Coyula, winner of the National Architecture Prize, argues in the epilogue of this book that “the city is the largest and most important form of cultural labor that unites the historical and architectural with everyday practical uses for all social sectors.”

In November 2019, the capital will turn 500 years old. What will be celebrated will reveal the city created in recent years. What could be celebrated might include the conservation of the historical center, the presence of fish, pelicans and gulls in the Bay of Havana after reducing the levels of pollution in its waters, the increase in accommodation capacity with new hotels built in partnership with foreign investors, the visits of three popes, a US president, and global celebrities, or the luxuriant Ceiba tree that was planted in El Templete, coincidentally days before the Obama phenomenon, in order to replace the moribund landscape.

But what ought to be celebrated, first of all, would be if once and for all housing in Havana be recovered, remodeled, and made habitable for residents. Otherwise, any tribute would be a sham, even if the restoration of the capitol building is completed — the future theater of the Cuban Parliament — or if the pretentious figure of 10 million visitors in one year is achieved.

This article is an exclusive extract for Global Voices. The full-length original version of “La Habana que se habita” can be read in Spanish here. Read more articles by Mónica Baró here.