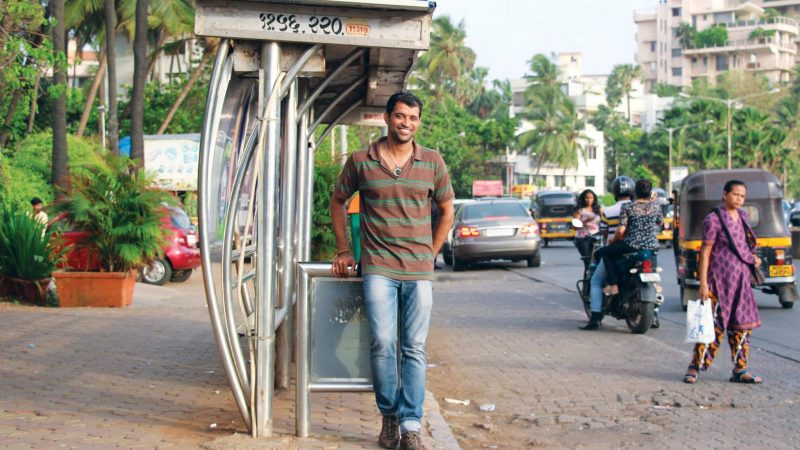 The story of Amin Sheikh, who wanted to change the fate of boys like him who grew up on the streets of Bombay. Photo credit: Humans of Bombay

After selling his autobiography book for nearly three years on Mumbai's busy streets, author Amin Sheikh is seeing the payoff for all of his hard work. He has finally fulfilled his longtime dream of setting up a cafe-cum-library in India's financial capital for impoverished street children.

Sheikh, 36, has had a lot of experiences in his short life. He was born in a slum in the north of Mumbai (at the time, the city was called Bombay) to a poor family. For him, life began at the age of five when he started working in a tea shop. By the time he was 16, he lived on Mumbai's hostile streets as a homeless child and had experience collecting garbage, singing on local trains, begging and ragpicking, working as a factory laborer, as a vendor on a train, as a boot polisher and as a doer of other odd jobs before being rescued by an orphanage in Mumbai named Sneha Sadan. They gave him a new home and changed his life.

Sheikh was sent to work for Eustace Fernandes, a very famous artist, when he was 17. He was his driver, cook and cleaner and learnt English in the process. With Eustace’s help, Sheikh started his own travel company called Sneha Travels in 2002. Eustace even took him to Barcelona once, where he visited a few library cafes from which he found the inspiration. 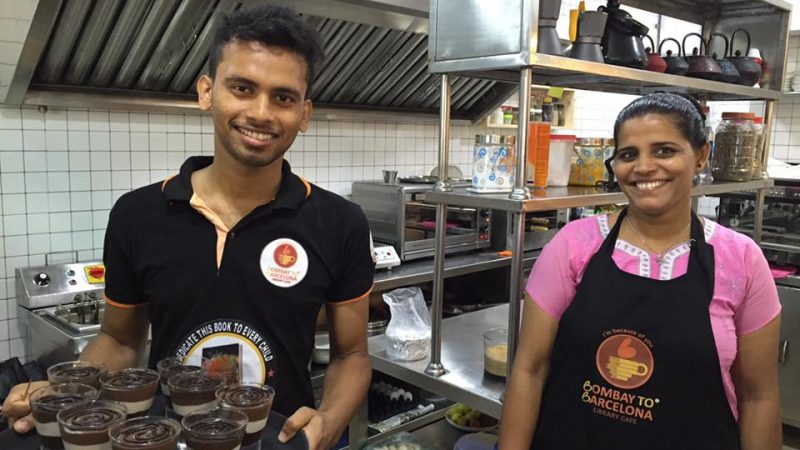 Workers in Amin Sheikh's cafe, which is staffed by former street children from Sneha Sadan. Photo used with permission

Today, Sheikh's cafe Bombay to Barcelona is painted in various shades of white and orange and is staffed by numerous former street children from Sneha Sadan. The cafe, which opened in the middle of August this year, wants to be inclusive for people from all walks of lives and thus the food items are priced reasonably. For example, a cup of tea costs only 10 rupees (15 US cents), the same as at any roadside tea stall. Sheikh's motto is: “Everyone deserves to go somewhere nice for coffee or tea”.

An estimated 37,059 children live on the streets of Mumbai, according to a census conducted by the Tata Institute of Social Sciences and voluntary organization Action Aid India. Two out of five have experienced physical, verbal or sexual abuse or forced starvation at some point in their lives.

Sheikh spoke to Global Voices about how he made this cafe possible, collecting funds by selling his autobiography, and his future plans to help street children.

“I sold books for nearly three years to collect funds to set up this cafe. We will always be open to street children and never reject their entry into the cafe,” he explained. 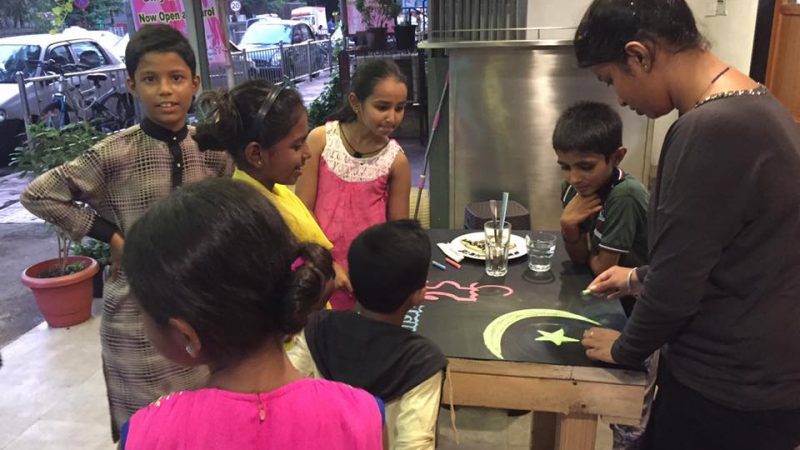 The cafe provides food and other assortments free of cost to underprivileged children. Photo credit: Bombay to Barcelona FB page. Used with permission.

In his autobiography, ‘Bombay Mumbai: Life is Life: I Am Because of You‘, published in 2013, Sheikh recollects experiences from his childhood days living on Mumbai's streets, singing and begging in the city's famous local trains and the turmoil he faced due to lack of family support.

Now, he uses revenue generated from his book's sale to fund his cafe.

“I ran away from home at the age of five after facing abusive behaviour and threats from my step-father. I begged, slept on train station platforms before being rescued by a shelter house — Sneha Sadan,” Sheikh says.

And he is resolute about providing shelter and support to other street children now. “I don't want these kids to go back to the streets again.” 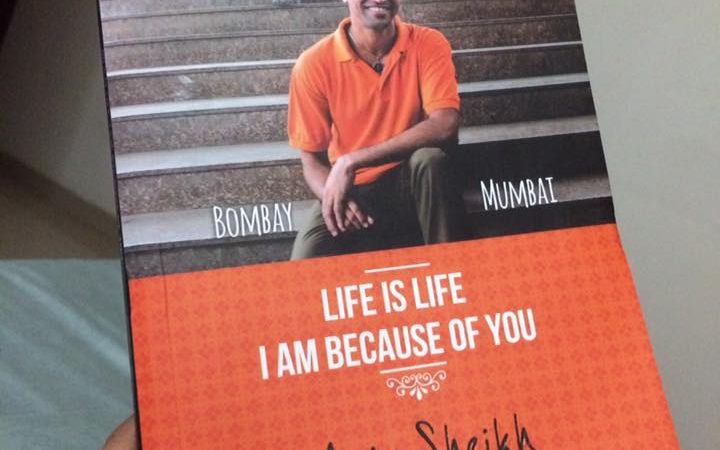 Sheikh has managed to sell nearly 12,000 copies of his book in various languages including Spanish, Catalan, and Marathi as a way of raising funds for his cafe.

One reader from Spain, Maria Antonia Perez, visited Mumbai recently to help Sheikh set up his cafe after reading his book. 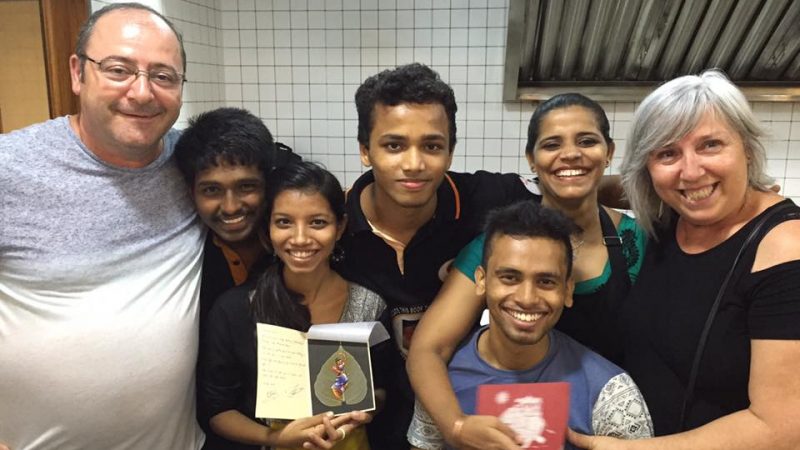 “We have a special table set in the cafe with cakes and other snacks for street children. Their reaction to this place has been extremely positive,” Sheikh concludes. 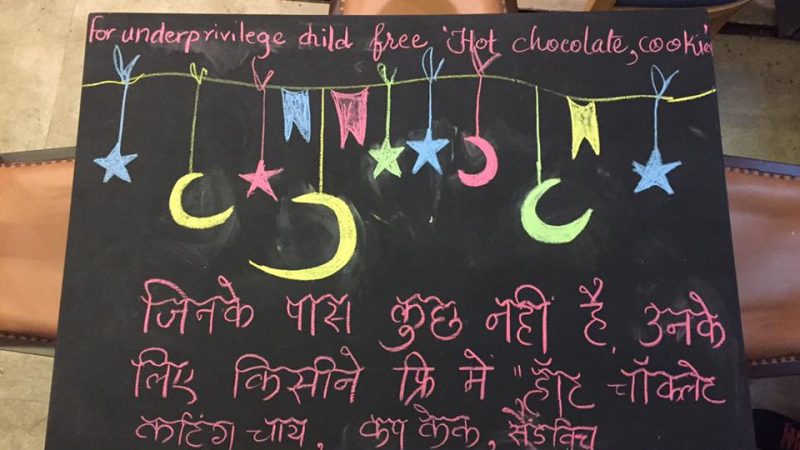 Here is his story in YouTube uploaded by Ditto TV:

In Mumbai, a group of media students have also made a short film on the book and Sheikh’s life:

People who visited the cafe mostly have nice things to say on social media.

This book costs only 300/-. If you buy it, you are helping Amin Sheikh, a former street kid, build a better life for others who are on the streets.

I just finished reading it. The life story, the journey is deep. Very real, very positive and oh so inspiring!

Bombay to Barcelona cafe is such a warm and nice place. :-) pic.twitter.com/y34kTQ7xAp

Never felt like home at any cafe before, like I did when I visited your cafe…. The ambience, the decor, the snacks… everything is just perfect….. The customer service is something I will never forget… I have always forgotten names of people working in hotels or cafe but at your cafe SAI, I can never forget the hospitality he provided and his name.. All the best…