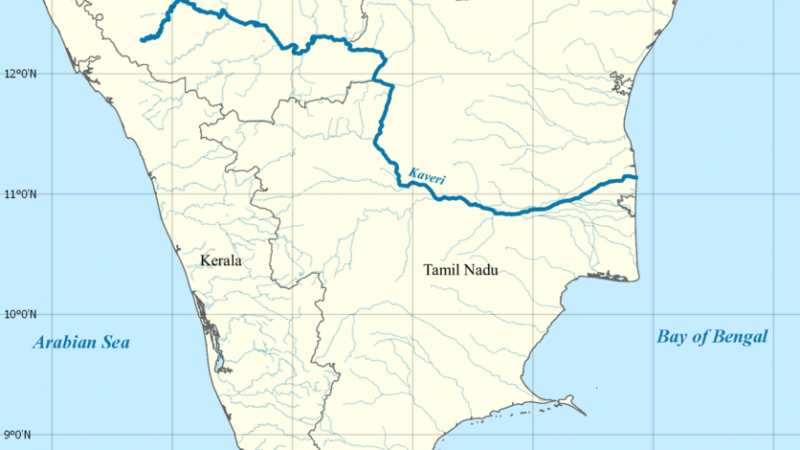 Map showing the path of river Cauvery (Kaveri) through the states of Karnataka and Tamil Nadu. Image by NaanCoder via Wikimedia commons. CC BY SA 3.0

The fight between the Indian states of Karnataka and Tamil Nadu over how water from the Kaveri river (known locally as Cauvery) is distributed has been going on since mid-19th century. Recently, however, the situation turned violent in an unprecedented way—so much so that authorities enacted a curfew in Karnataka's capital city Bengaluru.

After a day long strike in Bengaluru on September 9, unexpected destructive protests in many parts of the city ended in two protesters dead. One was killed when police opened fire on him, and the other died after trying to escape from a police baton charge while protesting during the curfew, otherwise known as Section 144 of the Indian constitution.

Others were injured, numerous shops and dozens of vehicles were damaged or set on fire, not to mention 30 to 45 buses of Tamil Nadu registration being torched.

If you set fire to things to protest the scarcity of water, then the protest goes from agitation to irony. #Cauvery pic.twitter.com/9GFqCnnNVi

So far, 350 protesters have been arrested on charges of violence and vandalizing property both public and private. Around 700 riot control police joined the existing 1,700 paramilitary forces by Monday the 13th. Bengaluru being the IT capital of India with almost all the Fortune 500 companies having a presence in the city, the Associated Chambers of Commerce of India has calculated the loss to be about 250 billion rupees (about 3.7 billon US dollars).

The violence arose after the Indian Supreme Court asked Karnataka to release 15,000 cubic feet per second of water from its reservoirs to Tamil Nadu daily for a period of 10 days. This, despite the fact that Karnataka has 36 thousand million cubic feet of water in its four reservoirs against 49 thousand million cubic feet stored in Tamil Nadu’s two. Amid popular protests, the Karnataka government asked the court to reconsider. The court rejected the plea, but did lower the quantity to 12,000 cubic feet per second.

Some have claimed that television and social media ignited the issue even further by spreading rumors, imagery of violence and hate speech. India's Ministry of Information and Broadcasting has asked the television channels to restrain from repeated telecast of ‘provocative and inflammatory‘ news.

Such tremendous loss to life, property, business on Cauvery sharing! Will politicians & media be booked for inciting, or this too will pass?

Given the history of the long-standing battle between the two states and the way it is affecting so adversely the people of both states, many have attempted to analyze the reasons behind the battle. A Arun Prasath, a user on question and answer site Quora, shared some history:

The debate over sharing Cauvery water predates to the late British era (1890s), wherein the Mysore princely state and the Chennai presidency (which was under the British Raj) had to come into terms with agreeing on a divide. The contention really arose when, in 1910, both states started devising plans for construction of dams. The British arbitrated the issue and defined the respective shares of water, and as to what area of farming lands are to be supported by these. A highly controversial agreement was arrived at, in 1924, and was designed to continue for the following 50 years.

On Indian online portal the Wire, another blogger, Girish Nikam, argued that Karnataka has had an unfair deal since the 10th century:

It certainly seems like a major injustice to Karnataka, no doubt. How did this happen? The answer to this lies in history, which we cannot re-write now. It so happened that rulers like the Cholas, who ruled that part of the country, which is now Tamil Nadu and where the river flows, had the foresight to build reservoirs and check dams in the tenth century and later, to utilise the water for irrigation. On the other hand the rulers of Mysore built their first major reservoir, K.R.Sagar only in 1934.

[…] With the mix of historical advantage blended with foresight as well as what is known as prescriptive right, Tamil Nadu naturally enjoys a greater share. It cannot be anyone’s argument that those who have been enjoying the water all these years should now be denied it. But going by the 1924 agreement, Tamil Nadu’s share, which was over 80%, has now come down to 57% and Karnataka, which was using about 16%, now gets 37%.

Sunil NG offered in a Facebook post some possible solutions to this problem, mainly reducing the dependency on water. He concluded:

Though Kaveri river water problem is a challenge, it can be effectively addressed by existing technology and expertise. However the politicization of the issue posing very high difficulty to bring change in the system.Political parties of both of the states using the issue as trump card to get votes. In-order to effectively address the issue, it is very important to keep away politics in the Kaveri river water problem.

As both the states have hundreds of thousands of farmers and other ordinary people depending heavily on the water, the arguments from both sides are equally important. But the violence has only made the problem more severe and the lives of many people difficult, while leaving less space for the two states to enter into bilateral negotiations.