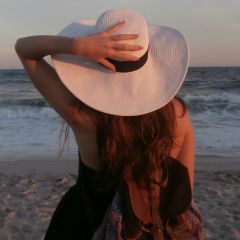 Macedonia may be one of the only countries in history to have an interior minister for just a single day. Oliver Andonov spent a marvelous few hours in office earlier this month—long enough to pose for some photographs in his office and sign a few documents, including his own resignation letter. (Andonov also managed to approve a number of vital ministerial appointments to entrench his political party ahead of snap elections.)

According to the Pržino Agreement, which ended Macedonia's long-standing political and institutional crisis, the Social Democratic Union of Macedonia (SDSM) had to assign a caretaker minister to ensure that the Interior Ministry couldn't be used again for electoral fraud by ruling Internal Macedonian Revolutionary Organization – Democratic Party for Macedonian National Unity (VMRO-DPMNE).

SDSM proposed making Oliver Spasovski the new interior minister, and he was supposed to take over for Mitko Chavkov on September 2. Just before the formation of a new opposition interim government, however, the ruling party still in power instead appointed Oliver Andonov, who happens to be a vocal activist from their proxy group Civic Movement Defense of Macedonia (GDOM).

The ruling VMRO-DPMNE managed to appoint and dismiss a new minister in just two days, in the time between a meeting of leaders from the four biggest parties and the inauguration of the interim government. When it was all done, Andonov had spent less than a day in office.

This summer shower will last longer than Oliver Andonov's mandate.

A day before the Pržino Agreement was set to take effect, Interior Minister Chavkov resigned, and the government suggested that Andonov take his place on the cabinet for the little time that remained. The parliament scheduled a debate and a vote on the proposal, and Prime Minister Emil Dimitriev welcomed the appointment, even though it was more symbolic than anything. He even praised Andonov, saying he know the activist would give the job his best.

“He is a professor at the Military Academy, and a professor at other institutions of higher education,” Dmitriev said. “From his biography, one can see that his whole professional career is in the field of defense and security. He currently works at the Military Academy. I think that this is a man who, despite not having worked at the Interior Ministry, with his educational credibility and achievements in the field of security, will give his best and professionally carry out his functions as interior minister.”

Lawmakers convened and Andonov was appointed unanimously with 65 votes. (Opposition members did not attend the session.)

The very next day, Andonov signed and submitted his resignation, and in his place came opposition representative Oliver Spasovski, who will remain minister until elections on December 11. During his tenure of a few hours, Andonov only managed to take a few pictures in the ministerial cabinet, which were subsequently published on the ministry's official website. 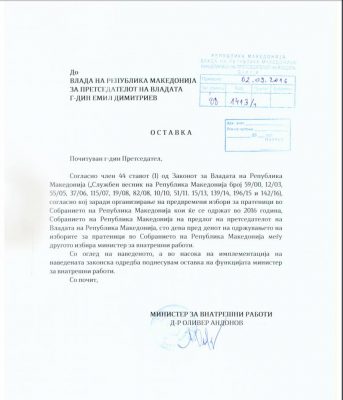 Oliver Andonov's resignation, submitted less than a day after he become Minister of Interior of Republic of Macedonia.

This tactical maneuver by the VMRO-DPMNE had a single purpose: to ensure that proven party loyalists would get the Interior Ministry's top positions ahead of snap parliamentary elections. Once Andonov became minister, he issued a hastily approved proposal to the government to appoint his predecessor Mitko Chavkov as director the Public Security Bureau (BJB), as well as Vladimir Atanasovski as Director of the Security and Counterintelligence Agency (UBK). Recent legislative changes prevent the new minister from firing them on his own, or appointing new people.

“With today’s changes in the Interior Ministry by the ruling party, they intend to establish and strengthen their positions before the elections within the ministry itself, which they have no intention of giving up. The Ministry of Interior is the most important institution during the elections and the government wants it to remain under the control of the MVRO-VMRO. As for Oliver Spasovski, they want him to be akin to an English Queen, or—to be more specific—they don’t want him to have any real power while he is sitting at the top,” sources told the Meta.mk news agency.

Andonov's whirlwind tour of government inspired a great deal of ridicule on social media, where Internet users marveled at the man who was interior minister for a day.

- I am Oliver Andonov, minister of inter…
(checks his watch)
– The former minister of the interior.

Oliver Andonov: “It's a great honor to become a minister, I will perform my duties…
Aaaaand it's gone!

- Doctor, how should I take these pills?
– 3 times per Oliver Andonov, before meals.

Oliver Andonov: “I would like to be a government minister, even for a day.”
The Government: “Say no more!”

Another Twitter user refereed to a well known government slogan, claiming they work “24/7.”

The whole government works 24/7, but Oliver Andonov 24 only.

Oliver follows Caesar's footsteps.
“I came; I saw; I conquered”—Julus Caesar
“I came; I made a photo; I departed”—Oliver Andonov