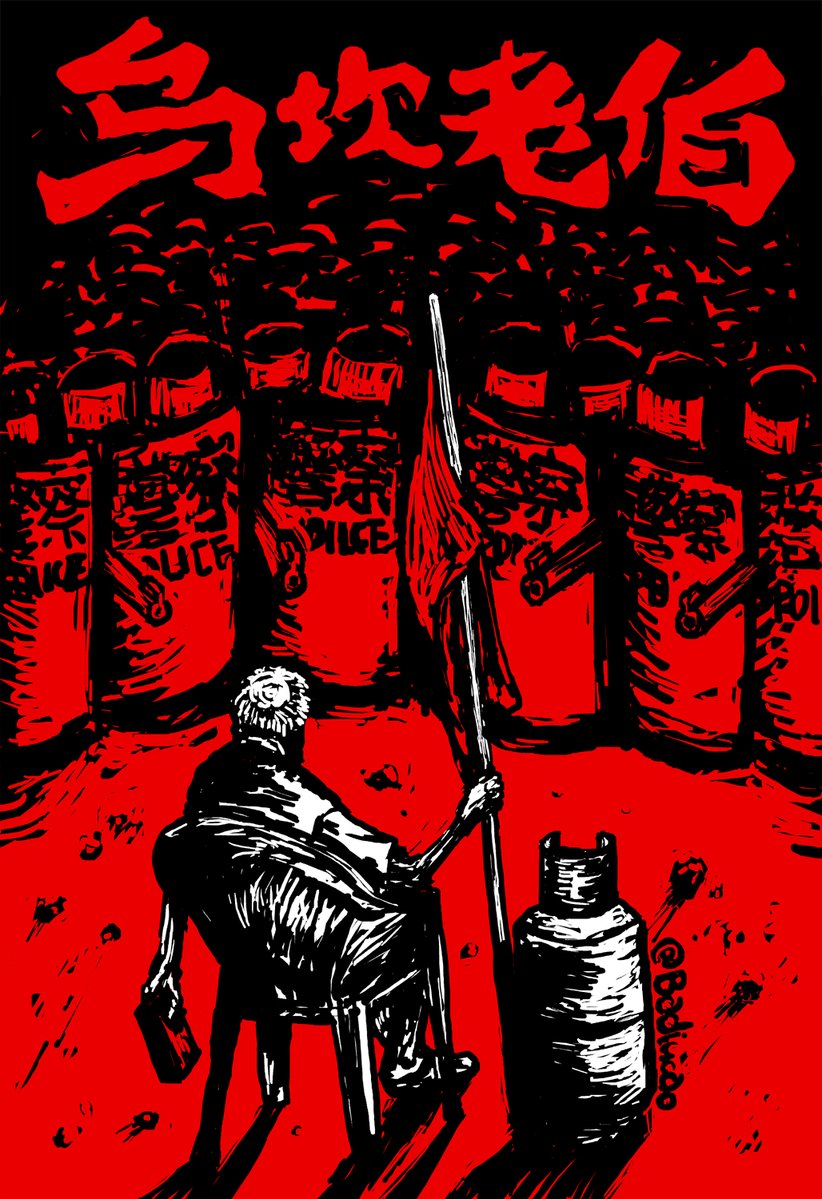 A political cartoon by Badiucao devoted to Wukan villagers who have been fighting for years to defend their lands.

Police unleashed rubber bullets and tear gas against protesters in Wuhan, a fishing village in the southeast Chinese province of Guangdong, who have been rallying for three months against the arrest and recent sentencing of elected village chief Lin Zuluan.

Lin was arrested on June 18 while he was planning a protest outside Shanwei municipality government against land seizures that had taken place in Wuhan. He was convicted of corruption and sentenced to 37 months in prison on September 8.

Villagers believe Lin was forced into confessing that he took a bribe and have been protesting for three months against his arrest and imprisonment. To stamp out any further mobilization, around 2,000 armed police locked down the village before dawn on September 13 and broke into village leaders’ homes to arrest them. Villagers fought back, and that's when police shot rubber bullets and tear gas at them, resulting in violent clashes.

A few dozen villagers were injured by the rubber bullets. The police officially arrested 13 villagers, claiming that they were inciting protests. Security camera footage circulated on Twitter by @beidaijin captured how police forced their way into one villager’s home in the dark:

During the raid, women and school children were temporarily detained with their hands bound. Some of them were injured (video via @beidaijin):

The police crackdown wasn't exactly a surprise. Before the local court issued Lin’s sentence, police from Lufeng, the county-level city where Wuhan is located, had notified the villagers to stop all their protests before September 10, otherwise, they would be held legally responsible of their actions.

But the villagers vowed that they would continue protesting against Lin’s jailing. The photos below show some villagers were still confronting police even after they launched their raid. One of the villagers, an old man, sat down in front of a line of armed police officers and placed a gas container besides him as a warning statement:

The fishing village is home to 13,000 people and first caught the world’s attention in December 2011 after a series of protests against corruption and land seizures. The villagers seized a government building, and the provincial government stepped in to investigate, later settling the dispute by allowing the villagers to re-elect their village officials. Lin was elected as the village head in March 2012. The peaceful resolution to local conflicts through a democratic process has been dubbed the Wukan Model by local and international media.

But the problem of seizures of village land without prior approval from the village government and villagers remains unsettled since the corruption is coming from upper-level town and county authorities. When a developer backed by the Donghai town government started a 170,000-square-meter property development project on Wuhan farmland without a green-light from the village committee, villagers hoped the provincial authorities would step in again. They hence planned to visit the Shanwei city government with their petition in June. Lin was arrested just two days before the planned protest.

Local authorities have given it their all to prevent the protests from getting too much attention. Area media outlets were instructed not to cover the story; photos and posts about the crackdown were labelled as rumors and quickly deleted from social media platforms quickly; Lufeng police made an official statement on popular microblogging site Weibo that they had restored pubic order in the village; and foreign journalists weren't allowed to enter nearby Lufeng:

With the hope of drawing more international attention to what happened in Wukan, the Hong Kong Alliance in Support of Patriotic Democratic Movements of China has called for a protest outside China’s representative authority in the special administrative region of Hong Kong — the Liaison Office of the Chinese Central Government — against the violent crackdown: