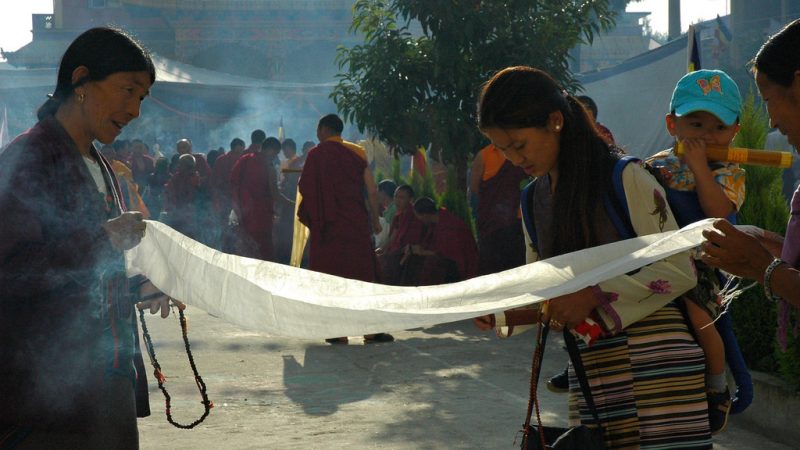 While the ‘burkini ban’ in parts of France created a furore around the world, Nepal's tourism ministry caused uproar among the country's indigenous community when it issued a directive banning the use of foreign-made khada, which is a scarf considered to be holy.

Khada is a traditional ceremonial scarf with its origins in Tibet, and it symbolizes purity and compassion. It is used widely in Nepal to honour people at special occasions and ceremonies, but has its roots among the Sherpa community, an indigenous people from the northern part of Nepal.

At the end of August, the Ministry of Culture, Tourism and Civil Aviation announced it had banned its subordinate offices from using imported khada. The ministry's secretary, Prem Kumar Rai, said millions of rupees were spent in importing khada and it was causing environment pollution.

However, the ministry has since asked that officers not implement the directive after it led to a huge hue and cry in Nepal.

To understand the uproar, you have to understand Nepal's caste system — the traditional hierarchy of social groups. ‘Bahun’ or Brahmin are at the top, and most of the political parties are led and run by Bahuns. Khas are also high in the hierarchy. The many groups below them, including Sherpa, have historically been discriminated against and marginalised. Through this lens, restrictions ordered by a government led by a Bahun majority on a sacred Sherpa garment was seen as more maltreatment of a caste placed lower in the hierarchy.

Today, Nepal is a secular country. This kind of irrational and not logical demands about ban on Khadas were not brought up even when Nepal was a Hindu Kingdom. The Bahunbadi parties and their stalwarts have forgotten that Nepal is a multi-linguistic, multi-cultural and multi-ethnic country.

If the Bahuns and Khas people are allowed to freely use imported dhotis, janai, Teej sarees and lots of other imported things, why should there be any ban only on the Khada. The intention is very clear.

I totally agree if the ban is imposed on all unnecessary imported goods, but taking a target only on Khada is outrageous and unacceptable.

Dhoti is a white wraparound worn by men; janai is a sacred thread worn by Bahun and Khas people; Teej is a festival celebrated by women from Bahun and Khas communities; and saree or sari is a type of dress worn by women in South Asia.

Yesterday: Ministry’s decision to ban the use of foreign khada.
Today: Minister’s order not to implement the decision. Spit on the government’s minister.

Nothing happens while importing lentils, sugar, rice, eggs and meat for consumption but importing khadas, a sacred material in Buddhism, led to loss for the racists.

In the end, the racists won’t allow khadas to be worn. Khada is a sacred material for the Sherpa community like basil is for Brahmin.

How would Hindus feel if putting tika on forehead is banned? That's equivalent to banning khada for us. Next on ban list: Momo and Thukpa!!!

Momo is a dumpling, and Thukpa is a popular soup in Nepal.

Some opined that people were misunderstanding the scope of the decision:

There is no BAN on import of Khada. Tourism Min ordered its subordinate offices not2use foreign made Khada.@Lhamo_Y pic.twitter.com/QELh82i0Jc

While others supported the ministry's directive ordering not to use imported khadas:

Learned that it has been instructed to stop using khadas that cannot be reused after first use and that pollute the environment while being destroyed. I am happy.

According to writer Aahuti, many didn’t know about khada until a decade ago. After the Maoist Rebellion ended in 2006 and the peace process began in Nepal, the use of khada grew. Khada is easy to carry, cheap, easily available and works as an equivalent of a garland of flowers. Because of this, communities beyond the Sherpa started using it.

But it still remains special for the Sherpa community, and any misuse of the khada isn't taken lightly. Earlier this year, Nepali actress Suvekshya Thapa wore khadas as a bikini and drew the ire of Sherpa community. She was suspended by Nepal Cine Artistes’ Association from being involved in any film related activities for six months for hurting the sentiments of Buddhists. 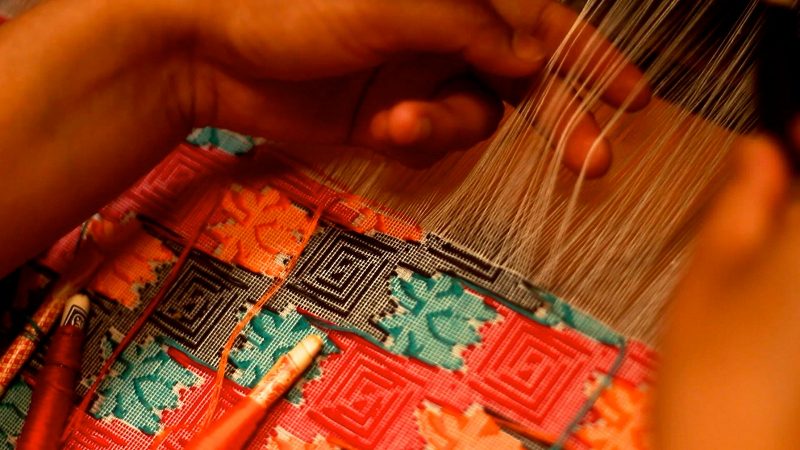 Handwoven dhaka fabric in Nepal. Image from Flickr by Oxlaey.com . CC BY 2.0

The indigenous communities are indeed hurt by the directive even if it spoke only of the foreign-made khadas. They are also not buying into the government's suggestion of using khadas made of Nepali fabric called dhaka:

Let's not commit the mistake of giving the sacred title of “khada” to a shawl covering the navel and a muffler used for drying hands after washing face.

In Nepal, people in rural areas wear mufflers, often made of dhaka, around their neck to keep warm and might use them as well as to dry their hands after washing them.

Although the minister has ordered not to implement the directive, the debate continues.

Khada is not Nepali. Dislodge it immediately. Likewise, momo, potato, maize, marigold, jeans, dhaka, get rid of them as well.