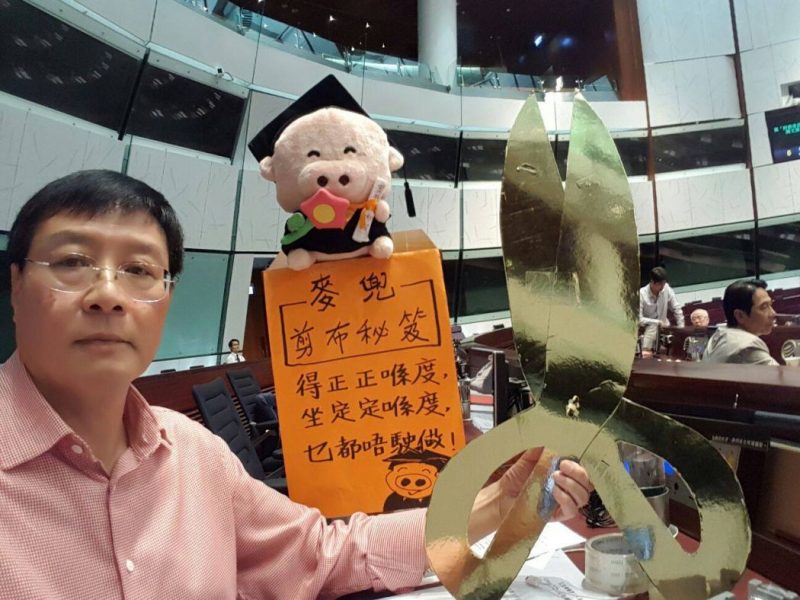 Wong Kwok Hing, a pro-China Lawmaker lost his seat in the 2016 election. Photo from Wong's Facebook via HKFP.

They say the best laid plans of mice and men often go awry, and for Beijing authorities at the moment, nothing could be truer.

Voters, who turned out in record numbers for Hong Kong’s recent legislative election, have ruined the mainland’s hope of stripping Hong Kong’s pan-democrats of their important veto power in the Legislative Council.

But there are plenty of other indications that ‘One Country, Two Systems’ understanding that allows Hong Kong significant autonomy from China is under attack.

The election results came as something of a surprise even to pan-democrats themselves, who were pessimistic ahead of the vote. They were up against the Hong Kong mainstream media’s hostile attitude toward political opposition candidates, and the pro-Beijing camp was doing all they could to engineer the election.

But the pan-democrats – a loose coalition of liberal-minded politicians who advocate democracy in Hong Kong over Chinese-style communism – still managed to win a majority 19 of the 35 seats. By all accounts, it was a small miracle.

Hong Kong is a special administrative region of China, which means it has the freedom to run many of its own affairs. In recent years, however, the mainland has made moves to hobble this autonomy and exert more influence there.

Despite the fact that presently 35 of 70 Hong Kong legislators are chosen directly by the people — the other half are selected by special interest groups representing business, religion, etc. — Beijing has found numerous ways to play within the system and influence voting outcomes.

One reason the pan-democrats experienced the success they did has was related to the high turnout – 58%. Thanks to the city’s proportional representation electoral system, if the turnout rate had been just four points lower – the same as the 2012 election turnout rate – Hong Kong’s pro-Beijing camp could have won at least 19 seats.

For example, say 100 votes are cast in an election and there are 10 seats in contest. Party A gets 62 votes, Party B gets 28 and Party C gets 10. To figure out the number of seats each gets, divide each party’s total votes by the number of seats available (10):

From this calculation, it is determined that Party A gets 6 seats, Party B gets 2 seats, and Party C gets 1 seat.

That’s where the remainder comes in. Whoever has the highest fractional remainder gets the extra seat, which in this case is Party B with 0.8. So in the end, Party A gets 6 seats, Party B gets 3 seats, and Party C gets 1 seat.

The system can favor parties and independent candidates with fewer votes. This is part of why in Hong Kong’s Western New Territories, for example, the pro-China camp managed to gain five seats with 266,351 votes, while the pan-democrats only won four seats with 330,107 votes.

The pan-democrats received more than 55 percent of the vote in this region, but had to share it among nine candidates, whereas the pro-China votes were only split between five candidates.

The China Liaison Office, which represents the mainland in Hong Kong, coordinates the pro-China camp of politicians up for election in Hong Kong, and clearly knows how to maximize the number of winners by distributing candidates throughout the electoral districts.

Control over the number of candidates

The Liaison Office divides the pro-China camp candidates into different lists, but keeps the number of lists low in order to avoid internal competition from harming the pro-Beijing cause. The pan-democrats are less united, and thus less effective.

The pro-China camp's strategy is so efficient that in six constituencies, it made off with 60 percent of the seats despite receiving only 45 percent of the vote.

Pro-China candidates who want to run for the Legislative Council also have to get the Liaison Office’s blessing if they want their support in the campaign.

But an affinity for Beijing alone isn’t enough. In an example of how the Office plays chess with the electoral system, Hau Chi-keung was forced to leave his community district in the Western New Territories to compete for a seat in the Eastern New Territories.

And Ken Chow, a candidate supported by the pro-China Liberal Party, was forced to drop his campaign and leave Hong Kong two weeks before election day because members of his family in mainland China were threatened, allegedly by “powerful forces.”

It is commonly believed that Chow was pushed aside to make way for Junius Ho Kwan-yiu, a candidate with the Liaison Office’s full approval. Ho eventually won the last seat in the Western New Territories constituency with only 35,657 votes and publicly thanked the Liaison Office for its support.

Infighting among the pan-democrats plays into Beijing's hand. Radical factions within the pan-democrat camp appear intent on smearing moderates, for instance. These divisions are so visible that more and more people are buying into a conspiracy theory that the extreme elements are actually agents planted by the Liaison Office to disrupt the opposition.

This year, some pan-democrat supporters launched a campaign against suspected instigators on social media. And Benny Tai, who was a leader of the Occupy Central protests in 2014 which called for free and fair elections in Hong Kong, launched an interactive poll called “Votsonar” on messaging service Telegram to coordinate strategic voting among pan-democrat supporters.

Moreover, some candidates from the pan-democratic camp, upon realising that they were not popular enough to win the election, decided to stop their campaign two days before the election in order to transfer their votes to other pro-democracy candidates. 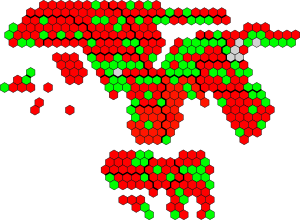 The distribution of pro-China (red) and pan-democrat district council seats in 2015. Via Wikipedia.

The fact that the Liaison Office can more or less evenly distribute votes among its blessed candidates is because it knows in detail how many votes they have and where their votes come from. Exactly how?

Hong Kong is divided into 431 geographical districts with the same number of seats. Since the electoral districts are very small, with no more than several thousand voters each, it is very easy to manipulate the election. In the 2015 district council election, the pro-China candidates managed to get 298 seats with 788,389 votes.

Participants of the district council election will get a full voters list with their household addresses. If the party has enough resources, they can organise free festival meals and offer free gifts with party candidates’ stickers on them throughout the year. There is a local term for such bribery called “snake soup, vegan buffet, moon cakes and sticky rice dumping” — all of these are local festival seasonal foods.

Nevertheless, the election turnout rate of the district council is usually lower than the legislative council, and some of their supporters may swing towards democrats. So, the Liaison Office consolidates support and coordinates votes through a network of pro-China civil organisations, including the Hong Kong Federation of Trade Unions, which has 189 affiliates and 62 associated trade union with over 390,000 members in Hong Kong, Kinship Associations, and China-affiliated business sectors.

Reportedly, Chinese state-owned firms handed out instructions to staff detailing who to vote for ahead of the legislative election. Members of pro-China worker unions and kinship associations repeatedly received phone calls with the same instructions.

The Liaison Office did manage to increase the number of votes in support of pro-China candidates in the 2016 legislative elections. As reflected in the voting result of District Council (Second) Functional Constituency, pro-China votes had increased by 78,726, from 723,071 in 2012 to 801,797 in 2016, outnumbering the votes pan-democrats had in 2012 by about 300.

Though the election results did not change the fact that the pro-China camp is in power, opposition voters are happy that they’ve collectively ruined Beijing’s calculated political plan. The Liaison Office must now face up to the awkward truth that its increased efforts at electoral engineering may actually be boosting turnout that strengthens the pan-democrat cause, even as the pan-democrats themselves are in disarray.

The more the mainland tightens its grip, the greater resistance it encounters from pro-democracy Hong Kongers.