“Finally, we, the Early Slavs, have inhabited the Internet, too. We bid you a warm welcome and pleasant stay.” Featured image from Dikan.rs website.

Dikаn, one of the most popular humorous comics of the now defunct Yugoslavia, has found new life in book form, thanks to two Serbian publishers.

Dikan was widely read in the 1970s and 1980s and followed the adventures of the title character Dikan and his uncle Vukoje as they wandered around the Balkans in ancient times. Its author, Lazo Sredanović, based the comics on an idea from Politikin Zabavnik magazine editor and script writer Nikolа Lekić, who imagined Dikan as a Yugoslav version of the French comic Asterix, combining universal humor and light satire in a historical setting.

Read today, at a time when some European governments have been less than welcoming to the record numbers of refugees seeking shelter on the continent, Dikan offers a timely reminder that we're all the descendants of migrants of some sort.

The first book quickly sold out, and a second book was so successful that the publisher plans reprints, as well as publish two more books with the remaining Dikan comics — four hard-copy revivals in total. They've also posted amusing snippets of the comics on social media, such as this outline of a device from the land of the Sarmatians for measuring stubbornness or hardheadedness — literally. 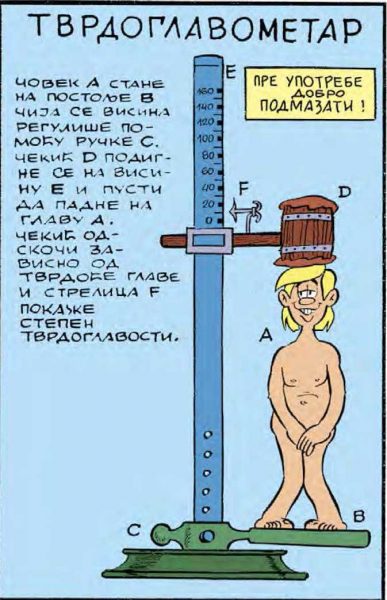 “Hardheadedness-Meter
(Oil well before use!) A man A stands on the platform B whose height is regulated by the lever C. The hammer D is raised to the height of E and then released to hit on the head of A. The hammer’s rebound is directly proportional to the hardness of the head, so the arrow F points to the degree of hardheadedness.” Artwork by Lazo Sredanović.

The Dikan comics in particular pokes fun at one of the many populations to migrate throughout Europe starting around the fifth century: the Early Slavs, whose culture and genes have been fundamental in forming the contemporary Slavic peoples, who in turn comprise the majority of today's inhabitants of Central and Eastern Europe.

The local term for the ancient population is “Old Slavs” in the sense of “ancient,” and the comics uses the term “New Slavs” when referring to its current readers. In the first comics, Dikan and his uncle serve as kind of advance scouts, exploring the Balkans prior to the Slav settlement.

After the breakup of Yugoslavia in the 1990s, some revisionist nationalist historians in resulting Slavic-majority countries shunned the concept of the Great Migration of the Peoples, trying to prove that their people had always been on their ancestral land, and all others are “newcomers.” The underlying assumption that proving ancestral ownership of a territory provides a privileged status today has also been used for nationalist mobilization in non-Slavic Balkan nations, including Greece, Albania, Kosovo and Romania.

Later Dikan comics went beyond their original setting in a way similar to Mel Brooks’ film “History of the World, Part I,” including to the Stone Age and the distant future, presenting a satirical sci-fi version of Yugoslavia as world power.

Emperor Justinian, as a character in Dikan comics.

Dikan's official website presents basic information about the republication effort, also in humorous manner. It features “testimonials” by some of the characters in the comics, including some historical figures, like the Byzantine emperor Justinian, a re-conqueror and legislator born in the Balkans:

Everybody says to me, Justinian, what an emperor you are… However, what did you ask? My opinion on Dikan? Uh, those Early Slavs are quite a nuisance. Something in-between illegal immigrants and political asylum seekers. One can't get around them. Therefore I would skip this question.