Remembering Some of Afghanistan's Brightest Lights, Killed in the Attack on a Renowned Kabul University 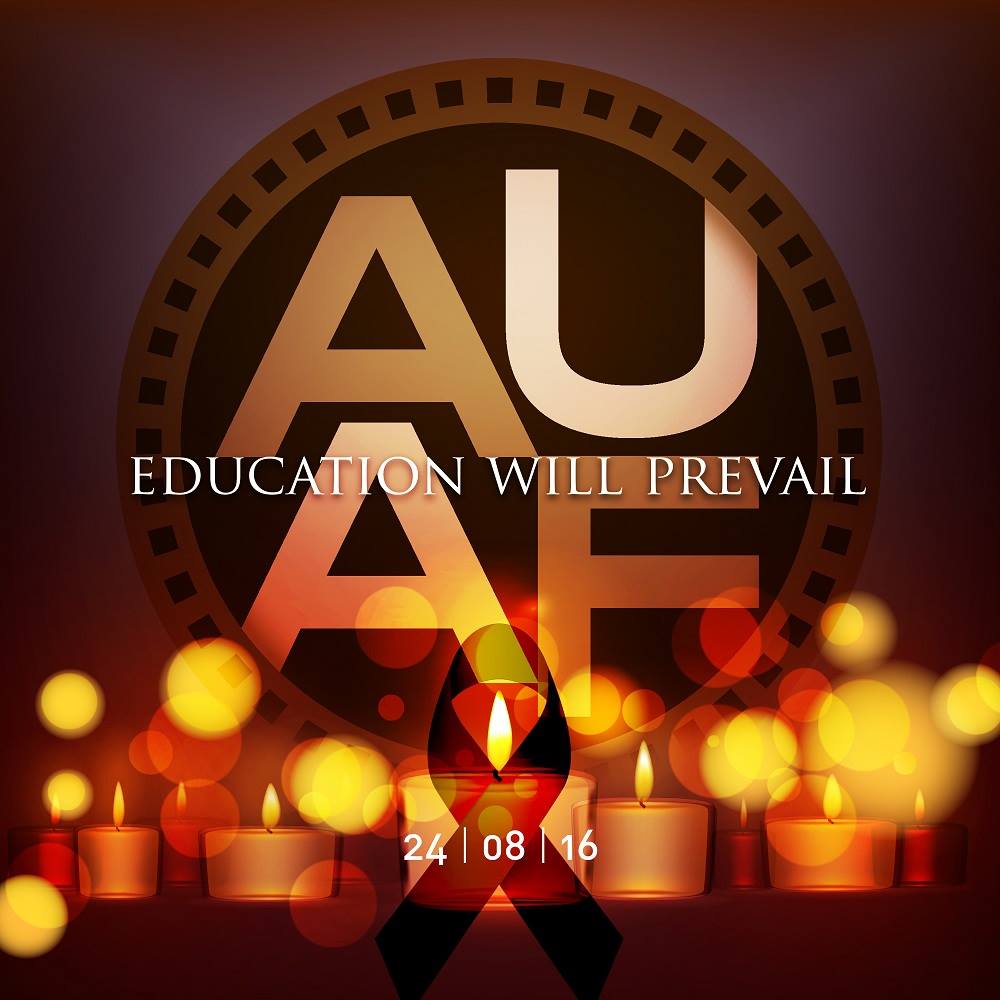 “Education Will Prevail”. Shared via the American University of Afghanistan's Facebook page on August 29th.

An armed attack on the American University of Afghanistan (AUAF) on August 24 left 16 killed, including an Oxford PhD candidate, a talented musician and a volunteer who taught street children. Dozens more were injured.

After the incident, Afghan youth and survivors of the attack shared messages of solidarity for victims on social media.

No group claimed responsibility, but Afghan president Ashraf Ghani said the attack was planned in Pakistan.

Many students and faculty members, including Pulitzer prize winning photographer Massoud Hossaini, were trapped inside one of the buildings at AUAF.

Some of them, like Hossani, were subsequently rescued by the Afghan police. After nine hours, the attack was over and the campus was evacuated.

The disastrous attack was condemned across the Afghan political spectrum and by international figures such as US Secretary of State John Kerry.

Pakistan's message of condolence was greeted with derision by many Afghans, however.

Students from the American University of Central Asia in Bishkek, Kyrgyzstan, where many Afghan students have friends in the sister institution, shared messages of solidarity and support with AUAF, in this video addressed to both victims and survivors.

Australian photo-journalist Andrew Quilty spoke to the family and friends of one of the victims, Jamshid Zafar while visiting Kabul:

Zafar was known for his ability to find common ground with even the most hardheaded antagonist. He studied law but volunteered as a teacher for street children in his own time. He was always busy but equally available to talk with friends or other students who, in spite of his relatively young age, marvelled at his mind.

Jamshid's friends were in shock at their loss.

I just found out my good friend Jamshid Zafar was 1 of the students murdered last night at #AUAF attack. Im in shock pic.twitter.com/fEZXZq2Jiy

Another friend of Jamshid shared one of Jamshid's own posts that read:

Death is a fact of life, but we can't stop living because we might die someday.

Funeral today of Jamshid Zafari, one of the young victims of attack on American University. Just devastating #AUAF pic.twitter.com/XKv23mIPo9

Alina, 18, was another victim of the AUAF attack.

She had just joined the university and it was her second day on campus.

My cousin Alina, 18, had just joined #AUAF; her dad is still in #Pakistan to get her transcripts. She was murdered by #SoldiersOfEvil

Naqib Ahmad Khpulwak, a professor at AUAF, who graduated from Stanford Law School and was an Oxford PhD candidate was the only professor killed at the attack.

His students and friends took to social media to show their solidarity and sadness.

Our condolences to family & friends of #Fulbright alumnus Naqib Khpulwak and others killed in the attack on #AUAF. https://t.co/9IIaVxnfaA

Abdul Walid was another victim who was cowardly killed by the terrorists in the attack.

Walid was a student at #AUAF. May his soul rest in peace. #AUAFAttack pic.twitter.com/wxMGRMOWpg

Today we are mourning the loss of our immortal hero Akbar who sacrificed his life 2 save students at the #AUAFAttack pic.twitter.com/xG7viWuKjp

The spirit of resistance

The American University of Afghanistan promised to reconstruct and reopen immediately after the attack to show that they are not going to submit to terrorism. In its August 26 press release, the university said it “has no intention of giving into terror.”

Young Afghan civic activist Jamshid Hashimi was one of many to tweet and write messages of resilience:

“I will keep my wings open, my music loud; no matter how much you keep me in the dark.
Hello! Do you hear me?
I am Afghanistan.”#AUAF #AFG

While these messages have been backed by a swell of solidarity, many Afghans continue to debate leaving the country as attacks on civilians have grown, undermining hopes for a peaceful future.

The recent attack on AUAF was seen as one such attack on Afghanistan's future. Since its foundation in 2004, alumni of AUAF have been granted prestigious graduate scholarships, including Fulbright, Chevening and DAAD scholarships that have enabled them to gain skills essential to rebuilding and developing the country.