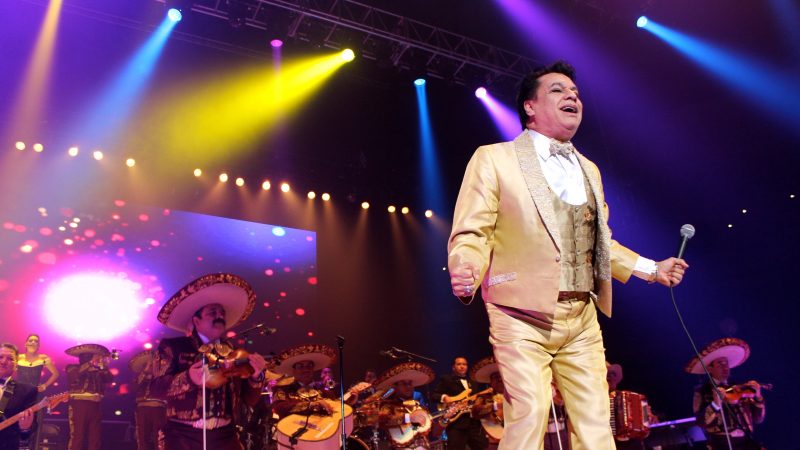 “And in Bellas Artes, Juan Gabriel performs what is inevitable for him: the Desplante,” Mexican journalist Carlos Monsiváis wrote in 1990 for Proceso magazine, describing pop music icon Juan Gabriel performing one of his famous dance moves at the Palacio de Bellas Artes cultural centre. “The defiant shoulder movement, the self-confessed study of the divas, the elegance of someone who goes for glory amongst the jeering of the condemned.”

In the midst of applause, tears and singing, fans of Juan Gabriel, one of Mexico's most loved and legendary music artists, paid their final respects to him at the very same Palacio de Bellas Artes on 5 and 6 September. Juan Gabriel, who made a career of challenging accepted social norms, passed away on 28 August, in Santa Monica, California, due to a heart attack, just two days after putting on a concert in the city of Los Angeles.

The ashes of the devoted singer-songwriter of Mexican pop music were transferred from Ciudad Juárez, the border town where he grew up, to the Mexico City cultural centre, where they were displayed in the foyer. 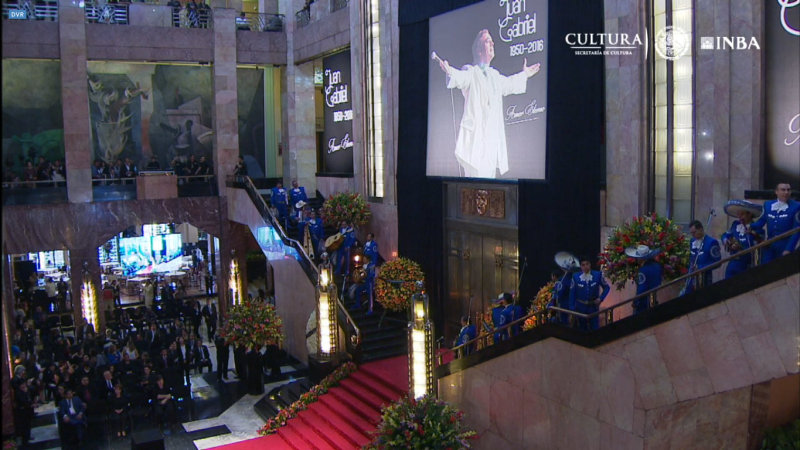 Screenshot of the streamed tribute broadcast by the channel of the Secretariat of Culture of Mexico.

The Palacio de Bellas Artes has become one of the ideal settings to honor iconic figures of Mexican culture posthumously. Over the years, tributes have been made to Frida Kahlo, Diego Rivera, Mario Moreno “Cantinflas”, Chavela Vargas, Carlos Monsiváis and Gabriel García Márquez.

While #Mexico says goodbye to #Juan Gabriel in #BellasArtes, the greats welcome him.

So, over the course of two days, almost a million people gathered in the vicinity of the historic centre of Mexico City, to have the chance to say goodbye to and be near the ashes of their idol.

The following video shows the beginning of what became the longest and most crowded posthumous tribute in the history of Mexico, up until now:

Singer, songwriter, arranger and producer with a career spanning 45 years, Juan Gabriel managed to become one of the most prolific artists in a diversity of genres important for Latin American culture: the ranchera, the bolero and the ballad. The composition of at least 1,800 songs have been attributed to him, performed by more than 1,500 artists around the world, and translated into a multitude of languages, including German, Japanese, Greek, and Papiamento.

For many, Gabriel was a sort of a “sentimental shepherd”, the voice of heartbreak, but also of celebration. With these songs he broke countless sales records and became the first pop musician to be presented in Bellas Artes, a space generally reserved for classical music concerts, opera or ballet (an achievement which was repeated in 1997 when he celebrated a career of 25 years, and in 2013, upon reaching 40 years in his career).

But beyond his undisputed musical successes, Juan Gabriel is recognised as a beloved idol who challenged gender conventions, class division, and social and cultural barriers, in a region where homophobia, classism and sexism are still prevalent.

Juan Gabriel challenged prejudices in Mexico. A star in a conservative and chauvinistic country who wasn't just shutting people up: he was getting them to sing.

You have no idea what Juan Gabriel means to Mexicans. Especially queer Mexicans. Flamboyant, fiercely talented, & brown. An icon. Our icon.

From Venezuela and through the media site Pro Davinci, Christina Rafalli delved into the paradox of Gabriel, and how this was important for the LGBTQ community of Mexico, although his activism was not openly declared:

He was born, raised and was loved in a country and continent where gay people are still discriminated against, victims of physical and verbal abuse, the subject of ridicule, of jokes and of disrespect in all its forms. But this was not the only paradox that reconciled Juan Gabriel. He journeyed to the centre of darkness of the Mexican soul, and where the archetypes of sick and caricatural masculinity were constellated, he rolled away the stone, and with his hot ashes, he created an unexpected and perplexing figure: the gay charro.

Charro is a term referring to a traditional figure in Mexico quite associated with extreme masculinity; comparable to a cowboy, but different in clothing and social status.

From Ecuador, Eduardo Varas explored his emotional and aesthetic consciousness that spread throughout Latin America:

That great (I always saw him as immense), sensitive guy, who was suffering all the time, had no reservations in making his mannerisms known. […] Everyone made fun of him, we made it part of our day to day because of how he moved, because of what he represented. “What a good singer he was…but I never liked the way he was!”, I heard someone say a few hours ago. Many will see defeat in this sentence, but not me. The greatest triumph over all that homophobia from the 1980s that Juan Gabriel always bore is here: in having accepted him, in having made him part of our lives, even though the only way of processing his flirtation and coquetry has been by way of jokes and veiled insults. The human being is mean, but as long as he or she accepts and recognizes beauty, not all will be lost.

‘El Divo de Juárez’ has been compared to other great musical legends such as Elvis Presley or Frank Sinatra; however, his fans know that his transgressive character, and his lyrical and theatrical mastery are, and will continue to be, incomparable.