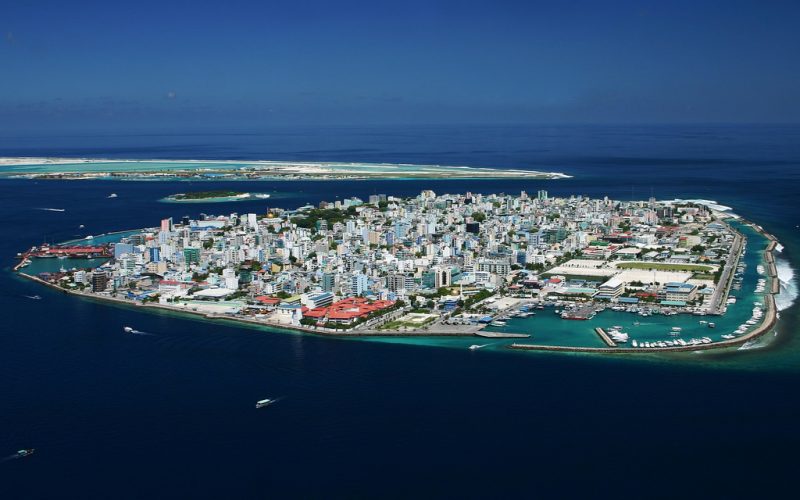 Malé , capital of Maldives. The Indian Ocean island nation, the smallest in Asia, comprises 26 atolls. Tourism accounts for over 1/5 of the country's GDP, so the revelation of a land lease deal involving hotels and casinos has serious implications for the country. Photo by Shahee Ilyas via Wikimedia Commons (CC BY-SA 2.0)

Police in the Maldives raided the offices of the online news outlet Maldives Independent just hours after the September 7 airing of “Stealing Paradise“, an investigative exposé by Al Jazeera that reveals instances of corruption by President Abdulla Yameen and his government.

The documentary, which based its reporting on documents obtained in a “major data leak”, shows how President Yameen and his associates embezzled millions of dollars, bribed judges and other high-level officials, and used influence to remove government workers who stood in their way. It includes secretly filmed confessions by associates of Yameen's jailed former vice president, Ahmed Adeeb.

Also featured are interviews with Zaheena Rasheed, editor of the Maldives Independent, and with leading opposition figures and former members of watchdog organizations involved in the investigation, including Global Witness.

Police came to the offices of the Independent and presented a search warrant, alleging a conspiracy by the news outlet “to overthrow the elected government, getting external help to overthrow the elected government, trying to create hatred between the public and the state institutions, and planning to create discord and unrest in Malé [Maldives’ capital].”

In an interview with The Guardian, Rasheed said:

“We’ve had one of our journalists disappear, a machete attack on our door, and our security cameras vandalised, so we’ve had to relocate once before. It’s not a safe place for journalists at all.” 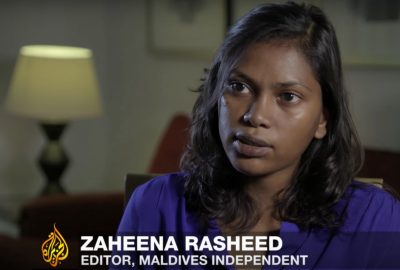 Zaheena Rasheed. Screenshot from the video

The publication also has been targeted by pro-government media “for its involvement” in the making of the documentary.

Fearing a backlash, Rasheed reportedly left the country before the documentary aired. Former Maldives auditor-general Niyaz Ibrahim, also featured in the documentary, is also reported to have left the country. Ibrahim was removed from his position in 2014 for publishing a report exposing financial irregularities under the Yameen regime.

The producer of the documentary, Will Jordan, was the editor of Minivan News in 2007, before it was re-branded as Maldives Independent in 2015. In recent weeks, Jordan has received hate-filled tweets and at least one death threat, which remains public on Twitter, despite the company's policy against direct threats of violence:

@willjordan U will die soon. We have hired some gunmens to shot u. & we r not afraid of fucking anyone or any country. See the bullet 🔫

The Al Jazeera documentary provides a timeline of corruption in the upper echelons of the Maldives government. It describes how President Yameen rose to power and shelved corruption proceedings against him by bribing judges. His deputy, Vice President Ahmed Adeeb Abdul Ghafoor, whom he later had arrested, was at the centre of many wrongdoings including bribery, theft, and a US 1.5 billion dollar money-laundering plot. 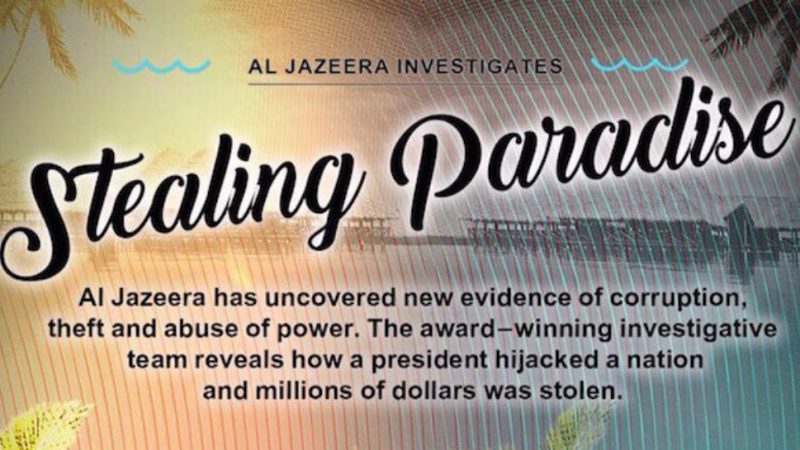 According to Adeeb's driver, who offered testimony in the documentary, the vice president once sent President Yameen $1 million in cash in a bag, “so much that it was difficult to carry.”

The documentary also exposes 59 corrupt land lease deals in which the vice president engineered agreements with major casinos and hotel companies that leased entire islands for amounts reaching into the millions. The Maldives treasury saw only a small proportion of these revenues, while the rest — about USD $80 million worth — was distributed to corporations owned by the vice president's relatives and friends. In a country whose economy is driven largely by tourism (revenues accounted for 28% of GDP in 2015), such a revelation is important news.

Al Jazeera drew on evidence gathered from three mobile phones Adeeb gave to a friend before he was arrested on 24 October 2015 on charges of attempting to assassinate the president. Adeeb, who also previously served as the Minister of Tourism, has called the trials against him as a “big joke”.

The documentary also shows that Adeeb abused his power as vice president to silence the media and to rack up charges against the former president Mohamed Nasheed by bribing judges and other influential persons.

The Maldives government has dismissed the documentary as defamatory and biased, accusing the Qatari broadcaster of advancing the opposition’s agenda of ousting President Yameen.

Threats were rolling in long before the documentary aired. A ruling party member of parliament threatened to sue Al Jazeera if they aired the documentary:

If Al Jazeera reports are publicised with baseless false accusations against President Yameen, we will sue them ! pic.twitter.com/wJEDPu5NxJ

Al Jazeera rescheduled the airing of the documentary after the threat was issued.

The ‘Stealing Paradise’ documentary was made in collaboration with the opposition by “a foreigner and non-Muslim called Will Jordan with the purpose of spreading falsehoods about the Maldives and causing loss of investor confidence”.

Ahmed Nihan Hussain Manik, parliamentary group leader for the ruling Progressive Party of Maldives, vowed on state media on 30 August 2016 that the Maldives’ far-reaching defamation law would be used against anyone involved in producing or broadcasting the Al-Jazeera documentary.

The controversial defamation law, which criminalizes defamatory speech, remarks, writings and actions and empowers the state authority to shut down media, was passed only a month ago. The law introduced fines of up to MVR 2 million (US $130,000) or up to six months of imprisonment for slander, remarks or content that threatens national security or breaches social norms. It can also force individual journalists to reveal sources of information. If found guilty under the law's provisions, journalists can face fines up to MVR 150,000 (US $9,727), and a decision can only be appealed once the fine has been paid.

Government supporters slammed the documentary on social media, using the play on words #HealingParadise, and local media have launched an offensive. The official Twitter account of the chief of staff for the president's palace tweeted:

When they hear our side of the story, they know we are #HealingAparadise NOT stealing… So it's lost from the schedule…

The documentary's airing is also reported to have instigated actions against government critics:

On Twitter, @ibramandhu wondered why officials seemed quieter about the documentary after it aired, implying that they did not wish to draw public attention to the film:

All govt boys and girls were very vocal about biased nature of #StealingParadise before it was aired. After airing, very very silent. Why?

Maldivian journalist Yameen Rasheed, who writes for local news site The Daily Panic, saw the documentary as further proof that government authorities were responsible for the 2014 disappearance of Ahmed Rilwan Abdulla, a blogger and journalist with the Maldives Independent (known then as Minivan News). Rasheed tweeted:

The documentary #StealingParadise has removed the last traces of doubt I had of state involvement in Rilwan's abduction.