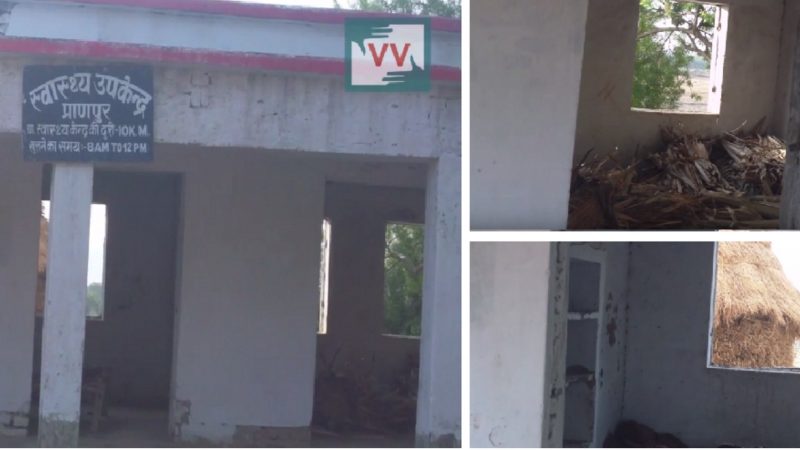 A rural sub-centre turned into a storage. Screenshot from a Video Volunteers Video

This post originally appeared at Video Volunteers, an award-winning international community media organization based in India. An edited version is published below as part of a content-sharing agreement.

Ram Subhagram’s polio-stricken father withers in pain as he lies in the sub-health centre in Pranpur, in the Indian state of Bihar, hoping that a doctor comes to visit him soon.

But Ram knows that the wait could be indefinite. One in four people in rural India are living in poverty, and ill-health is one of the major causes of their misery. In case of an illness, their nearest government-funded health facility is a sub-centre, which caters to the healthcare needs of 5,000 people in general and 3,000 people in hilly, tribal and underdeveloped areas. And while Indian Health Ministry guidelines state a sub-health centre is to be operational 24/7, this centre has only opened occasionally for a few days a month over the last 20 years.

Ram has no other option but to wait for the centre to open to get treatment for his father because poverty makes it impossible for him to seek private medical assistance.

This particular centre's non-availability is so bad that residents have decided to use the abandoned space for storage. Video Volunteers community correspondent Surendra Sharma, who lives in the neighbouring village of Madanpur and reported this story, explained:

The Pranpur residents have started using the abandoned space as a storing place for fodder and the occasional shack for travelling relatives and friends.

The centre’s doors have a perpetual lock, but the unfinished buildings have no windows, which serve as a doorway into the buildings.

In Indian public health, a sub-centre is the most peripheral and first point of contact between the primary healthcare system and rural communities. Each sub-centre is supposed to be manned by one auxiliary nurse midwife, one female healthcare worker and one male healthcare worker. Sub-centres play an instrumental role in bringing about behavioural change and provide services in relation to maternal and child health, basic immunisation, check-ups and communicable disease prevention programmes.

However, the number of these health care facilities are inadequate, and many of them remain dysfunctional due to lack of funding and other issues. According to a report by the United Nations, 75% of the health infrastructure in India is concentrated in urban areas where only 27% of India’s population lives. The rural population of India is around 716 million people (72%) and yet they have to travel far to a nearby urban area for health issues as there are not enough medical facilities near them.

The sub-centre in Pranpur is one example of the shortcomings of this system. “On the rare occasion that the health centre is open, the nurse tells us that the centre has no medicines,” said a frustrated Ram Subhagram.

The Ministry of Health and Family Welfare is supposed to pay for the medicines and supplies, as well as provide for the salaries for the female healthcare worker and the auxiliary nurse midwife in addition to a contingency fund. That raises the question, if the health centre is allocated funds to operate for the entire year yet is only occasionally functional, is the allocated money being misused?

The women of Pranpur revealed to Surendra how not having an active sub-health centre, which is supposed to keep track of maternal and child health, including nutrition, immunisation, diarrhoea, etc., affects mothers and children. Brideshini Devi said:

The nearest hospital is 5-6 km away in Madanpur. Taking a heavily pregnant woman through bad roads poses a lot of threat to her life. We are unable to meet the rental expenses of the vehicle which cost Rs. 500, nor do we get a loan for the same easily.

A report by Jan Swasthya Abhiyan, the Indian branch of the People’s Health Movement, revealed that a Bihari citizen’s average out-of-pocket expenditure was Rs 41,000 (about 620 US dollars) per annum, which was mostly spent on drugs and diagnostics.

Below Poverty Line families who are unable to finance these expenses take loans or sell family properties, slipping further into the black hole of poverty that they aspire to get out of.

Like Ram and Brideshni, there are several hundred Below Poverty Line families in the village of Pranpur who suffer due to this non-functional health centre.