A Man in Crimea Self-Immolated to Save His Wife’s Cafe From Officials, Who Razed It Anyway 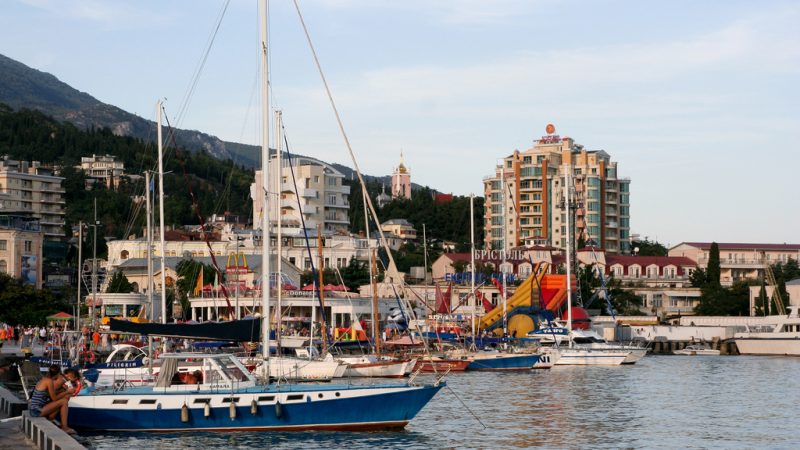 Late last week, 75-year-old Yalta pensioner Alexander Strekalin poured acetone down his back, lit himself on fire, and collapsed near Primorsky Beach in the center of the city. Strekalin, a former deputy head of Yalta's city administration and years earlier a Chernobyl first responder, was taken to a local hospital, where he died two days later.

The businessman from Yalta who set himself on fire has died in the hospital.

Strekalin’s self-immolation was the dramatic climax of a battle over Khottabych, a cafe registered to his wife, Mila Seliamieva, located on Primorsky Beach on the Black Sea. Several media outlets reported that Strekalin set himself on fire in protest of the local authorities’ attempts to tear down Khottabych, which has since been razed. Earlier, Strekalin warned local officials that he would kill himself if the city moved on his property.

Seliamieva told the newspaper Komsomolskaya Pravda that local authorities shut off the utilities to her cafe in May, and that this latest attempt to tear down Khottabych was the city’s eighth. Khottabych has been a fixture in Primorsky Park for more than 15 years, Seliamieva said: “We pay our taxes to the city regularly and have the building’s registration certificate, an agreement for the lease until 2018.” Mustafa Seliamiev, a relative of Seliamieva, said that Strekalin, “on more than one occasion, tried to compromise with the current authorities … but without any success. All summer we fought the builders, who, on the city’s orders, tried to tear down our café.”

A YouTube video posted on May 28 shows law enforcement officials forcefully removing Seliamieva and two other people from the Khottabych roof. An unidentified man asks Seliamieva to show her documents proving the legality of her business; later, a group of men begins to dismantle the building.

Andrei Rostenko, the head of the Yalta city administration, said back in May that Khottabych was an “illegal structure” that “violated all possible norms.” The leasers, he said had “not met sanitary and epidemiological standards [or] safety and labor laws,” or “taken appropriate fire prevention measures.”

Khottabych seems to have been targeted as part of a broader attempt by city officials to clean up the city’s downtown beaches. As Rostenko noted in May, “It’s no secret that residents and visitors in Yalta [don’t] like what was happening on Primorsky Beach. We need to stop the chaos, which has been going on for decades. If we don’t do something, we won't have a city anymore, but rather a village with stalls.”

Some in Crimea have praised Strekalin’s protest for bringing attention to state overreach on the peninsula. As Yalta-based activist Sergei Sardyko wrote on Facebook following Strekalin’s passing,

Alexander Ivanovich Strekalin has died. His death draws the attention of the whole of Russia to the lawlessness perpetrated in Yalta. We are organizing a “Rostenko—resign” protest, and ask everyone to write a letter to Putin requesting that a government commission be sent to Yalta to address land and property issues, and to fire Rostenko. We hope that law enforcement officials will open a criminal investigation on the basis of Article 110 of the Criminal Code of the Russian Federation: “Incitement to Suicide.”

Attempts to clean up Yalta’s beaches resemble an ongoing campaign in Moscow to rid the city of “illegal businesses.” Nearly 100 shops and kiosks were torn down on the night of February 8-9, 2016, in a wave of destruction that has been dubbed the “Night of the Long Shovels.” Moscow Mayor Sergei Sobyanin wrote on the social media website Vkontakte that the shops had been “erected in the 1990s with the open connivance or assistance of government officials” and were “dangerous for Muscovites.” The city launched a new wave of demolitions (the third overall) in late August.

In both Yalta and Moscow, city officials appealed to building codes and health requirements, as well as the overall benefit to the local population, to justify their trampling of individual rights. Property rights in Yalta, Moscow, and elsewhere in Russia seem to mean little when pitted against city, state, or even personal imperatives. Seliamieva has said that she plans to sue the city, but in the face of “eminent domain, Moscow-style,” she’ll be fighting an uphill battle.

Not to worry, though: Yalta officials have promised to take the “human factor” into consideration next time they demolish “unauthorized structures.” The deputy head of the city administration told the television network Crimea 24: “We, of course, have learned from this, and will take a more balanced approach to solving such problems in the future, accounting for the emotional qualities of a person.”