Brazil's Military Police Is Unleashed on a Growing Protest Movement 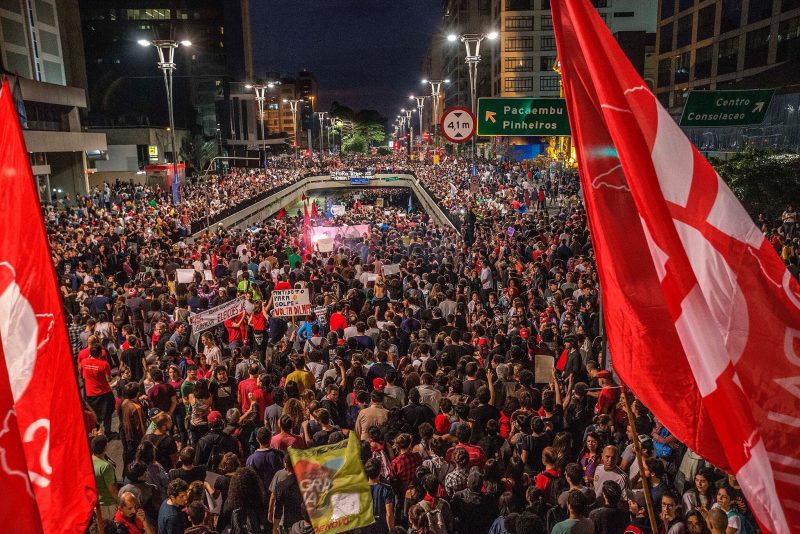 Thousands gather at the beginning of the demonstration. Photo by @uneoficial, free to use.

Organizers say that roughly 100,000 people attended the protest, walking from Paulista Avenue to Largo da Batata, a large square on the Western (and wealthier) side of the city. No violence was reported during the demonstration itself, but police reportedly attacked the crowd with tear gas once people were already making their way home. Michel Laub, a Brazilian writer who attended the rally, says the police moved with without any apparent provocation.

According to witnesses, a group of police officers—a special unit of the military police specialized in crowd control—approached the demonstrators outside a metro station and started beating people without provocation. Congressman Ivan Valente was present. He later denounced the behavior by the police:

Military Police command says it acted at the request of Metro [company]. But the security guards of the Metro denied that the Military Police version and said that there was no vandalism and never called for backup. 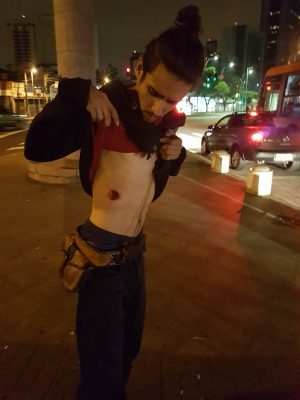 A rubber bullet mark at the body of an activist. Photo by Democratize, free to use.

A social scientist at a nearby bar says he heard explosions and ran towards the scene. He tweeted:

On the way, I knew that the pretext for the brutal repression of a PEACEFUL DEMONSTRATION was a discussion of Military Police officers with a group that wanted to get on the subway station.

Alderman Nabil Bonduki published a video of the police response:

Regrettable. Military police attacks people in Faria Lima for no reason after the end of the demonstration #ForaTemer

A beautiful demonstration, a quiet crowd, and long walk—in the end the Military Police contributes havoc, claiming vandalism. And it is this moment that the media uses as headline.

The Twitter account Midia Ninja recorded a video of one man's arrest – Hélio Ramos, 37, who was released by the police after midnight:

The Twitter account of the Military Police later said that officers were only responding to certain vandals:

In an initially peaceful demonstration, vandals acted and forced the Military Police intervene with moderate use of force / chemical ammunition. 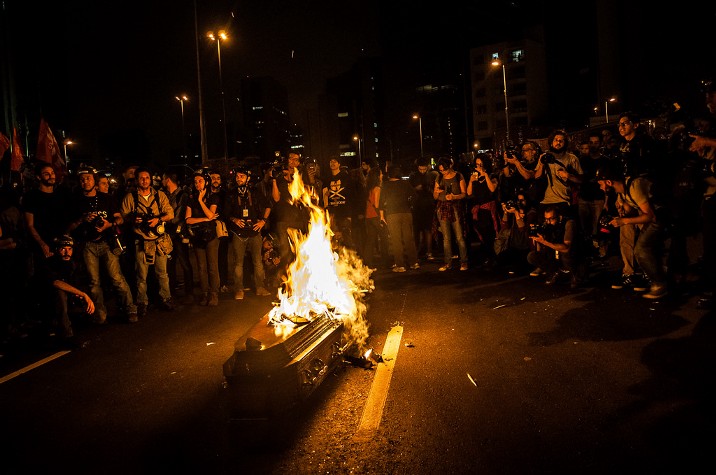 A coffin is burned to symbolise Temer's government. Photo by Fernando DK/Democratize, free to use

BuzzFeed published a video of the Largo da Batata engulfed in tear gas:

The demonstration was over. In turmoil, Military Police shoots stun grenades and gas.

Police even fired tear gas into a bus, causing an elderly woman to faint and even causing discomfort for several children. Felipe Souza, a journalist for the BBC, was beaten by Military Police officers despite identifying himself as requested.

The Military Police also attacked people inside bars and restaurants. Democratize Agency recorded footage of some of these incidents:

The Military Police of São Paulo believe that is “necessary means to contain disturbances” to throw tear gas into the subway.

Finds that “dispersal strategy” is to drive with a vehicle in front of a bar with people on the sidewalk and shoot pepper spray in their faces.

Tell that to any police commander in the world (except here, of course) and if you don't show pictures of the event, none of them will believe.

Arrested Before the Protest

Twenty-six people, including eight minors, were arrested at the São Paulo Cultural Center, near Avenida Paulista, on suspicion of planning acts of vandalism during the demonstration, according to Ponte Jornalismo. One of the people arrested was Felipe Ribeiro, 27, who was at the library studying and says didn't plan to attend the demonstration.

Another six people were arrested during the demonstration for wearing black clothing and masks (a outfit associated with Black Blocs).

Eighteen of those detained have been indicted for criminal associations and the corruption of minors (other sources state that the number of underaged suspects is ten). They have all been released on the night of September 5, first the adults, whose charges were dropped by the judge, and then later that same night, the minors.

The supposed evidence against these individuals consists of several discovered items: gas masks and glasses used for eye protection, as well as mobile phones and personal items. The prisoners also spent eight hours without access to lawyers or their parents.

The arrests of the young people constitute violations of the right to protest and of freedom of expression, increasing significantly in recent days due to the national political scene. Moreover, the situation is even more worrying by the fact that the detainees were held incommunicado for hours without access to justice.

Pablo Ortellado, a professor at the Universidade de São Paulo, wrote on Facebook that police apparently hacked the suspects’ WhatsApp accounts to track their plans. Ortellado says law enforcement has exploited its power to “arrest for inquiry,” which he describes as an “illegal remnant of dictatorship.”