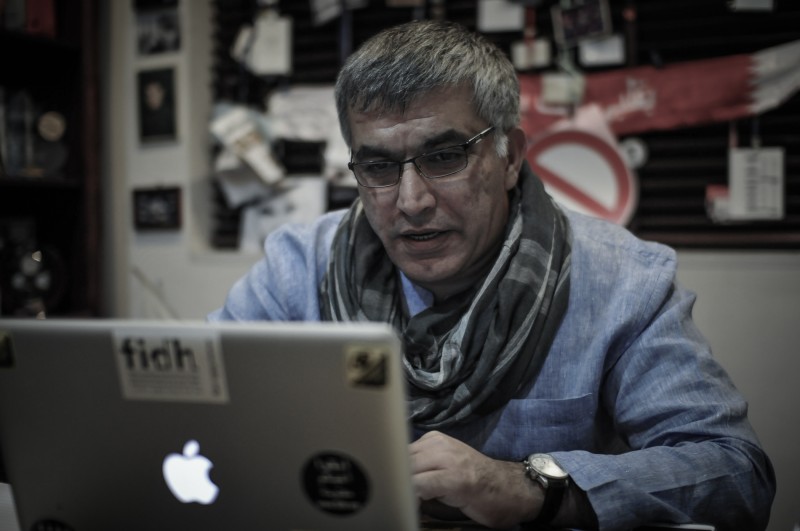 The director of the Bahrain Center for Human Rights, Rajab has been jailed several times since 2012 for his activism and human rights work.

Rajab was arrested yet again on 13 June 2016 for criticizing Bahrain's participation in the Saudi-led war against Houthi rebels in Yemen, and for speaking out about torture in Bahrain's infamous Jaw prison on Twitter. The court postponed the verdict until 6 October and refused to release Najab in the interim.

If convicted, Rajab could face up to 15 years in prison under Bahrain's penal code which prescribes a 10-year jail term for anyone who “deliberately announces in wartime false or malicious news, statements or rumors,” and two years for “offending a foreign country.” His tweets about Jaw prison could bring him an additional three years in jail for “offending national institutions.” 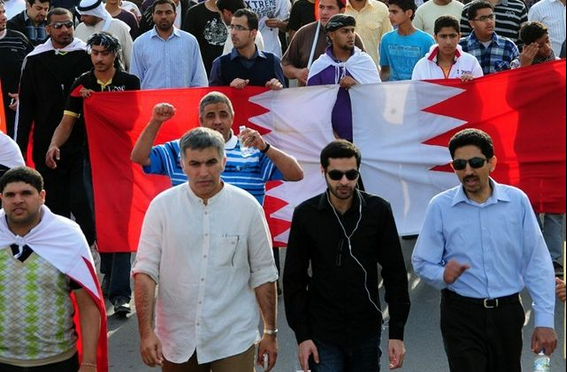 Left to right: Nabeel Rajab walks in a 2012 protest march with Ali Abdulemam (currently in exile) and Abdulhadi Al-Khawaja, who is also in prison for his political activism. Photo by Mohamed CJ via Wikimedia (CC BY-SA 3.0)

In court, Rajab argued that his re-arrest was motivated by his involvement in lobbying US officials on the human rights situation in Bahrain and the Arabian Gulf region, not the charges that were filed against him.

Rajab originally was arrested on these charges in April 2015 before he was released in July of the same year. Yet prosecutors never closed the case and thus ordered his re-arrest on 13 June 2016.

Rights activist Nabeel Rajeb in court: my arrest took place because they [the authorities] got upset by my meeting with the US Secretary of State, as I was called for investigation afterwards

Nabeel Rajab in court: this case is vengeful and my arrest came after I refused to remove my name from a letter addressed by activists from the Gulf [region] to Obama while he was on a visit to Saudi Arabia

On Monday, authorities further charged him with “undermining the prestige” of the ruling regime over a letter he wrote in prison, in which he described how he was punished for denouncing Bahrain's role in the war in Yemen and critiqued the United States’ inconsistency in responding to human rights violations in Bahrain. The letter was published on 3 September in the New York Times.

From the beginning, I was against the war. The civilian death toll was immediate and catastrophic, and I spoke out against the unfolding humanitarian crisis, calling for peace. Now, I am paying the price.

- Nabeel Rajab, “Letter from a Bahraini Jail,” via the New York Times

Human rights activists and groups in the region and across the world are campaigning for Rajab's freedom. On the occasion of his 52nd birthday on 1 September 2016, protesters gathered outside the Bahraini embassies in the UK and the US demanding his release.

Thank you to everyone who joined us to mark @NabeelRajab‘s birthday & call for his release! #ReleaseNabeel pic.twitter.com/LbwTh9d3rE

.@NABEELRAJAB is spending his 52nd birthday today n a Bahraini jail – freedom of expression is being denied to him & many others #FreeNabeel

Happy birthday @NABEELRAJAB. May u be reunited with your family soon. You are free despite their prison bars, that's y they fear u #Bahrain

Nabeel Rajab also was named “prisoner of the month” for September 2016, by the “Their Freedom, Their Right” campaign. Led by the Lebanese free-speech civil society group Maharat Foundation and the Egypt-based Arabic Network for Human Rights Information (ANHRI), the campaign calls for the release of one prisoner of conscience in the Arab region each month.

You can support activist Nabeel Rajab by posting information and photos about him on Facebook and Twitter using the hash tag “their freedom, their right”.

Rajab is not the only one paying the price for his activism and political views in Bahrain. In the island kingdom of 1.2 million people, there are more than 4,000 political prisoners according to 2015 estimates from human rights groups.