Protests Erupt in Brazil as Rousseff's Impeachment Is Confirmed 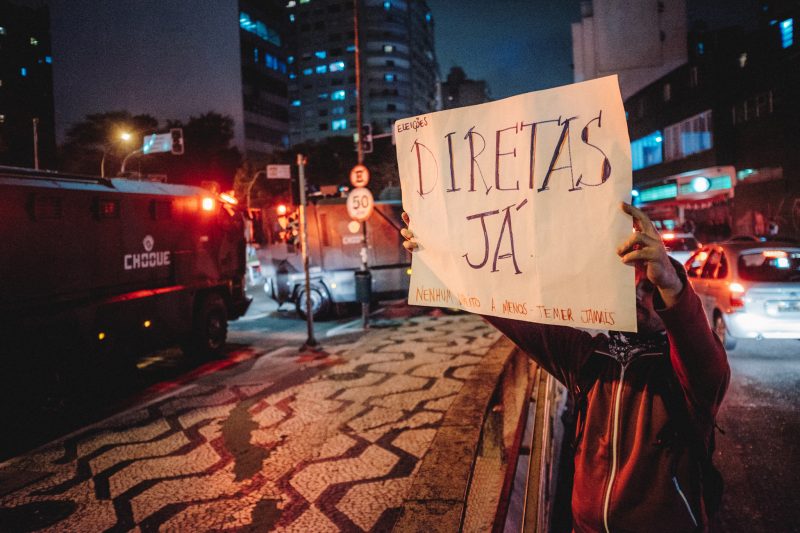 A protester holds a sign that says “direct elections now” in São Paulo. Behind him are two Israeli-manufactured bullet-proof trucks owned by the police. Photo: Mídia Ninja, CC-BY-SA 2.0

The Brazilian Senate overwhelmingly voted to remove Dilma Rousseff from office during the last week of August after a year-long impeachment process that has paralyzed South America's largest country, exposing deep divisions among its society. Rousseff will be replaced for the remainder of her term by Michel Temer, her former running mate who help lead the campaign to oust her.

Protests against Rousseff's impeachment took place in several Brazilian cities this week. São Paulo had daily protests since August 29 — all of them met violently by the police who used stun grenades, tear gas and rubber bullets against demonstrators. On August 31, the day when the impeachment was sealed and which saw the largest protest, university student Débora Fabri was hit in the face by bomb shrapnel and spent the night at a local hospital. She later wrote on her Facebook page that she has been blinded in her left eye.

Rousseff was found guilty of manipulating the federal budget to hide a growing recession. During her defense, she emphasized her personal honesty and lack of involvement with the corruption schemes that have marred the country's politics for decades. Sixty-one percent of Brazil's 81 senators have been convicted or investigated for corruption.

After being sworn in, the new president, Michel Temer, addressed the nation in a television broadcast during which he called for national unity and rebuffed those who call the process a coup d'état. Temer and his supporters in the legislature have endorsed reforms in Brazil's pension funds, as well as changes to labor relations and cuts in government spending that will affect Brazil's universal public healthcare system.

Rousseff was elected in 2014 with 51 percent of the vote on a platform that promised to expand social programs, although in 2015 she herself stepped back from some of those promises, pivoting to milder fiscal adjustments that would actually cut social security benefits. 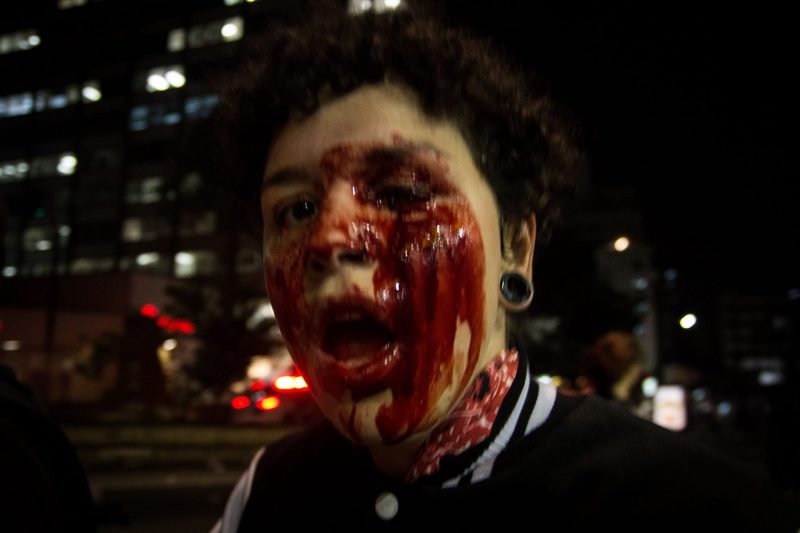 Débora Fabri, 19, has been blinded in her left eye by bomb shrapnel used by police forces in a protest in São Paulo on August 31st. Photo: Mel Coelho/Mamana Foto Coletivo. Published with permission.

Protesters are mobilizing against what they see as a maneuver by a corruption-marred congress to remove a democratically elected president, push neoliberal reforms, get a better grip on power and halt the Lava-Jato investigations on corruption that implicate them.

Although social movements that are historically connected to Rousseff's Worker's Party — like the Central Union of Workers (CUT) and the Landless Worker's Movement (MST) — have supported the demonstrations, most of those involved are not necessarily demanding Rousseff's return. Instead, they are asking for new general elections. Global Voices reporters who witnessed the protests in São Paulo noticed a smaller presence of Worker's Party flags and banners at this week's demonstrations, which were organized via social media. Most of those who attended appear to be under the age of 25. 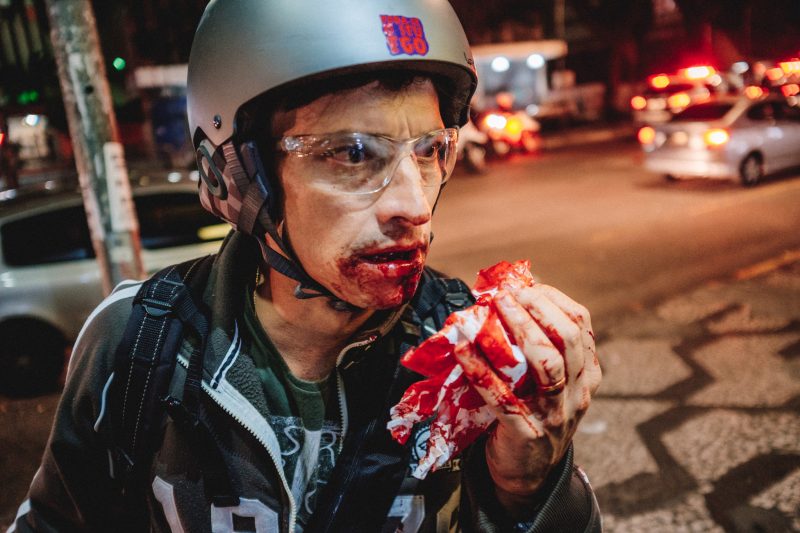 Photographer Fernando Fernandes was hit by rubber bullet on the mouth on Thursday in São Paulo. Photo: Mídia Ninja, CC-BY-SA 2.0

Protests have kicked off at the Museum of Art of São Paulo (MASP) on Paulista Avenue, one of the city's main thoroughfares. Demonstrators are deciding on the spot where in the city to march. On Tuesday and Wednesday, protesters tried to walk to the offices of the newspaper Folha de S. Paulo, which they regard as being supportive of Rousseff's impeachment. On Thursday, they decided to march to the headquarters of the Partido do Movimento Democrático Brasileiro (PMDB), the political party of current president Michel Temer. Each day, the police would disperse protesters before they could reach their destination, and on Friday, a demonstration organized mostly by black feminist movements wasn't allowed to march at all.

Protesters reacted to police attacks by building barricades along the streets on which they wanted to march and in two protests, demonstrators vandalized a few banks. On August 31, a police car that was parked in the Largo do Arouche area of São Paulo was also smashed. 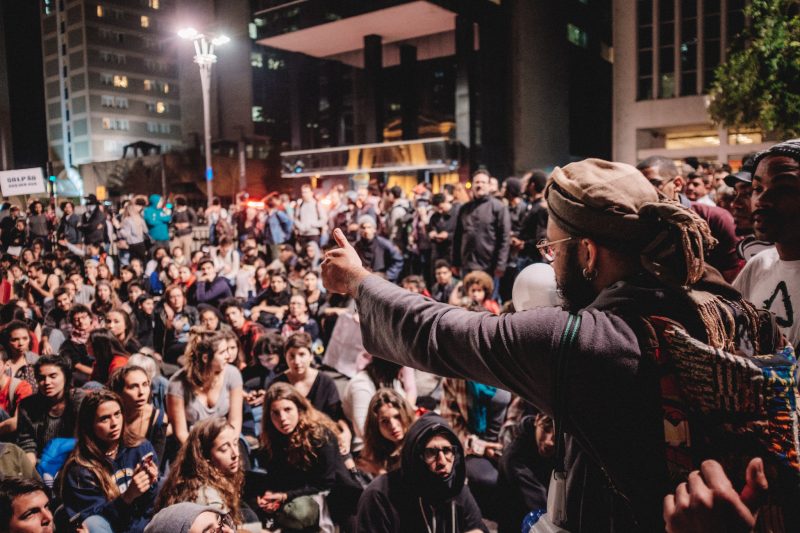 During the week, the police temporarily detained several people, while many others, like university student Débora Fabri, were badly hurt. According to reports, police assaulted two photographers on August 31, smashing one of their cameras. The very next day, another photographer, Fernando Fernandes, was hit in the mouth with a rubber bullet.

A video by activist Caio Castor shows police beating up protesters in Avenida Nove de Julho on Thursday, just as the demonstration was making its way to the city center.

An editorial titled “Fascists on the Loose”, which was published in Folha de S. Paulo, the same privately owned newspaper that is thought to be pro-Rousseff's impeachment, sparked outrage on social media when it accused some protesters of provoking the police and damaging public and private property. The piece demanded that police divide protesters into peaceful and violent and punish the latter accordingly, calling them “delinquents” and “fascists”. 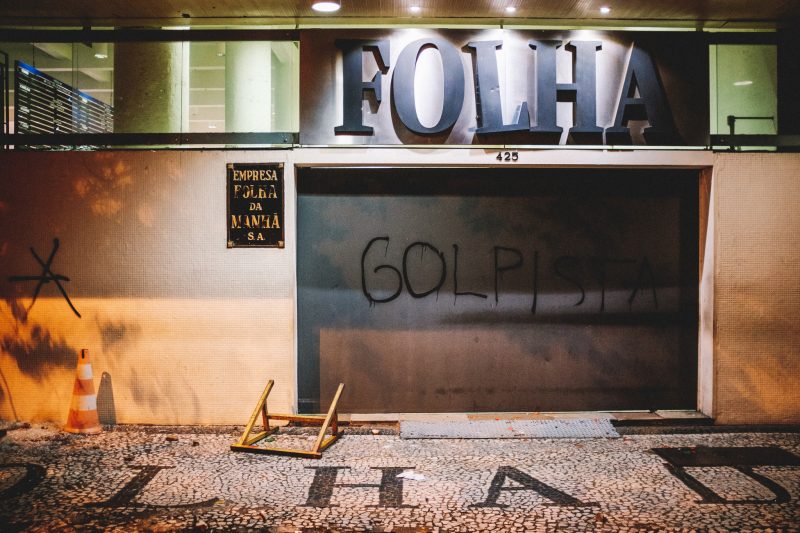 During the week, as protesters planned a massive protest scheduled for Sunday, September 4 on the Avenida Paulista, the state government had issued a note forbidding any demonstrations to take place, as the avenue will be part of the torch route for the Paralympic Games. This initially sparked outrage on social media as well, but after a meeting mediated by São Paulo's mayor, the governor decided to allow protesters to hold their demonstration after the torch goes through. On Facebook, more than 50,000 people have either confirmed their attendance or showed interest in Sunday's event.