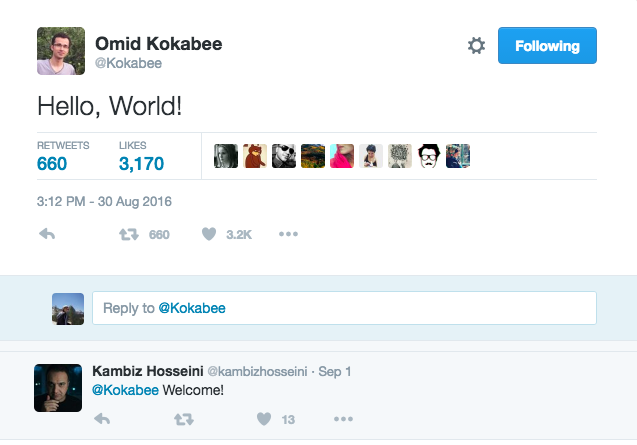 The day after his conditional release from Evin Prison in northwestern Tehran, Twitter became the platform of choice to communicate Iranian nuclear scientist Omid Kokabee's first public message after years of incarceration:

The 34-year-old physicist spent the last five years in prison for refusing to work on Iran's military and nuclear research. He was granted a conditional release on August 29, 2016.

The Judiciary Chief approved a ruling by Branch 36 of the Tehran Appeals Court that says Omid Kokabee qualifies for conditional release and therefore he will not be returning to prison.

Kokabee himself talked about the injustice of his arrest in an open letter that he wrote from jail in 2013:

Is it a sin that I don’t want, under any circumstances, to get involved in security and military activities? I have just turned 30 years old after spending two years in prison, when I am eager to pursue scientific research.

Kokabee's Twitter debut comes four months after the world took notice of his plight, thanks to a global Twitterstorm. Just prior to the unexpected death of American musician Prince, the #FreeOmid hashtag led Twitter's worldwide trends:

While in prison, Kokabee suffered from kidney stones and other serious illnesses, explaining that the lack of proper medical attention — which is common for political prisoners in Iran — was the reason his health was in critical condition. On April 20, 2016, Kokabee had an operation to remove one of his kidneys, but advocates, friends and family members were convinced that his health would not recover if the conditions of his incarceration remained the same. 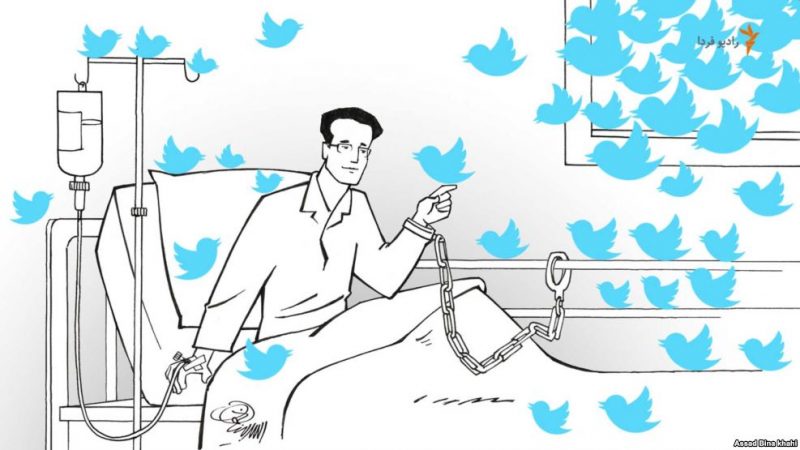 Cartoonist Assad Bina Khahi depicts the Twitterstorm that was undertaken in support of Omid's freedom to seek medical treatment for his cancer outside of prison in April. The cartoon was drawn for Farda Cartoon, a section of the Iranian news website Radio Farda and posted here with permission.

The government eventually granted him medical furlough on May 25, 2016, a little more than a month after he had the surgery to remove his cancerous kidney. Many suspect that the international attention — including the Twitter campaigns — had an impact on the government's decision.

The campaign is ongoing, since Kokabee's conditional release does not allow him to leave Iran and return to the United States, where he was finishing his postdoctoral research at the University of Texas at Austin. He was arrested on January 30, 2011 at Tehran’s Imam Khomeini Airport, while on his way back to pursue his studies.

In a nod to the explosion of support and calls for his release under the #freeOmid hashtag, Kokabee also thanked his supporters in a heartwarming tweet:

Greetings to each and every one of you dear friends who never forgot me and were always there to warm my heart to hopes towards a beautiful future. I love you. #freeOmid

In a separate case, Shahram Amiri, another incarcerated Iranian physicist was executed earlier in August. While his arrest was also related to the country's nuclear programme, he was accused of espionage.