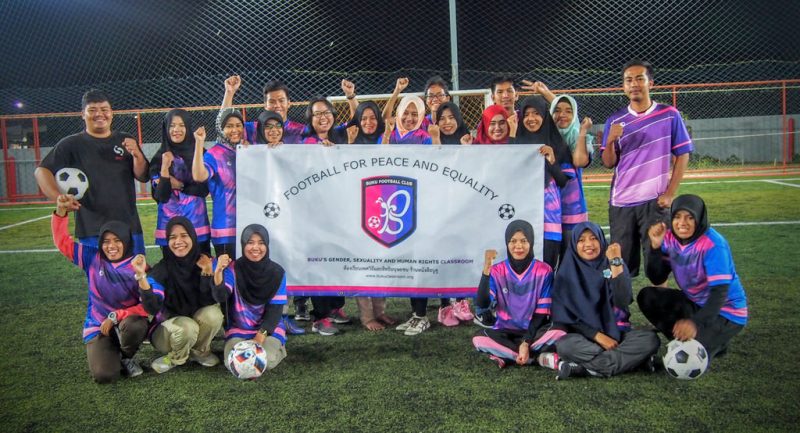 This edited article by Thaweeporn Kummetha is from Prachatai, an independent news site in Thailand, and is republished on Global Voices as part of a content-sharing agreement. The text was translated by Asaree Thaitrakulpanich.

A note to readers: Most of Thailand is Buddhist, while Thailand's Deep South has a Malay Muslim majority population, and some groups here seek to establish a separate state.

The only thing many people know about Thailand’s Deep South region, called “Patani” by the locals, is the conflict that has claimed more than 6,500 lives over the past 12 years. Both state and private funding pours into the region, in efforts to resolve the violence through a peace process.

Nevertheless, Anticha Saengchai and Daranee Thongsiri, LGBT activists and the two owners of the Buku Books & More Pattani Bookstore, insist that Patani has no shortage of other social issues that need to be discussed, such as gender equality. Anticha and Daranee believe that women and LGBT people should have a say in the Deep South's peace process, ensuring them a voice in determining Patani’s future.

To further this cause, Anticha and Daranee have created a football club called Buku FC to provide local women and LGBT individuals a space to express themselves. In an interview with Prachatai, Anticha talked about the project:

Football is seen as a male sport, and a space for men. Women often go to football fields with the role solely as spectator, cheering on men who are playing. But in actuality anyone, regardless of sex, can kick a round ball. By starting a football club and encouraging women to join, we are saying to Patani society that women can do the same things men do. We want to convey to the women who come to play with us is the idea that they really can do things they may have thought they couldn’t, such as self-expression and leadership. We believe that the simple activity of football will affect other parts of their lives.

While Buku FC encourages women and LGBT individuals to join, anyone can play on the team, regardless of sex, gender, age, religion, beliefs, or political views. The only requirement is that the person should view the world through a “Gender Lens,” or an understanding of gender.

We intend the football field to be a microcosm of society, where people of any gender can coexist equally with respect for each others’ bodies and spaces. If it’s possible for that to happen in society at large, then we believe that it’s possible for our little rectangular football field, too. We want to demonstrate that whether man, woman, LGBT, or people with different levels of skill, we can all play the same game with the same set of rules, without the big people bullying the little people.

Buku FC, under the slogan “Football for Peace and Equality,” had its first practice on August 13, 2016, at the Victory Stadium in Mueang district, Pattani Province. There were 20 participants, including 17 women and three men. Most of the players were students at the Prince of Songkla University's Pattani campus. Everyone seemed excited to play in a formal stadium—especially the women, most of whom were playing football for the first time. 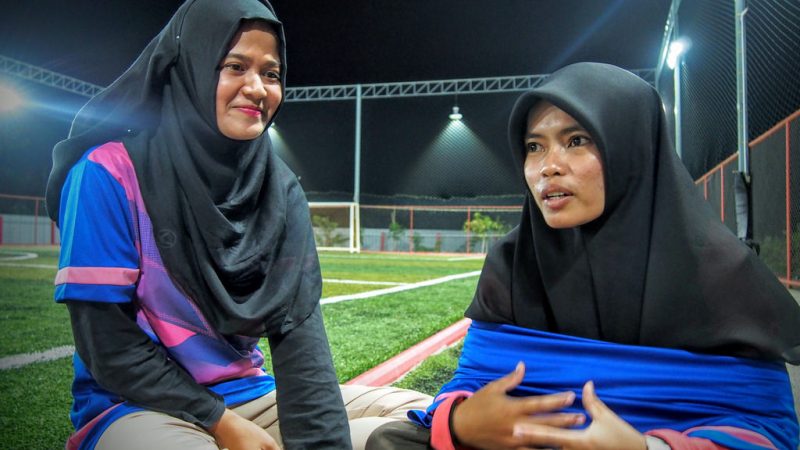 Waeasmir Waemano and Sawani Mama, students at the Pattani campus of Prince of Songkla University, say they want society to see that women can play football, and do so even while wearing hijabs. Photo by Fadila Hamidong, courtesy of Prachatai.

Waeasmir Waemano, a fourth-year student at the Faculty of Political Science in the Pattani campus of Prince of Songkla University, told Prachatai:

People often view football as being a man’s sport, so women think that it is inappropriate to play football, and they don’t dare. In the Deep South, people think that it’s not appropriate for women to play football because it’s a sport that requires you to raise your legs to kick. However, the world is changing and society in the Deep South must keep up.

Although Waeasmir plays sports regularly since she is on the futsal team at her university, she still feels hesitant about playing outside of her university at Victory Stadium, next to which is a football field where the players are exclusively male.

If I play sports outside the university, I get strange looks from people, as they think ‘Huh, a Muslim woman playing football.’ People in the Deep South are concerned about the body and they feel it is inappropriate [for women to play football], because when we run, parts of our body shake.

Sawani Mama, a third-year student in the same department as Waeasmir, expressed her concerns about her body and sports. She was afraid that others would judge her because it is inappropriate to run during football. Therefore, she solved this problem by wearing two layers of loose-fitting shirts and a hijab covering her entire chest.

Sometimes I still worry that while I run, my breasts will heave, or something like that. But I’m wearing loose shirts, a hijab, and even lipstick to play football. So I feel that all of these things go together, no problem.

The two women agree that playing football is an activity that both promotes their self-expression, and is a way of telling society that women can play the same sports as men.

Anticha added that, in order for the women on the team to feel more comfortable playing, the men have not yet participated with them in a co-ed game. They could practice together, with the men leading the warm-up exercises or acting as goalies. After everyone understands the rules and respects each other and the differences between their bodies, we may open a space for men and women to play in the same game in the future, she explained. 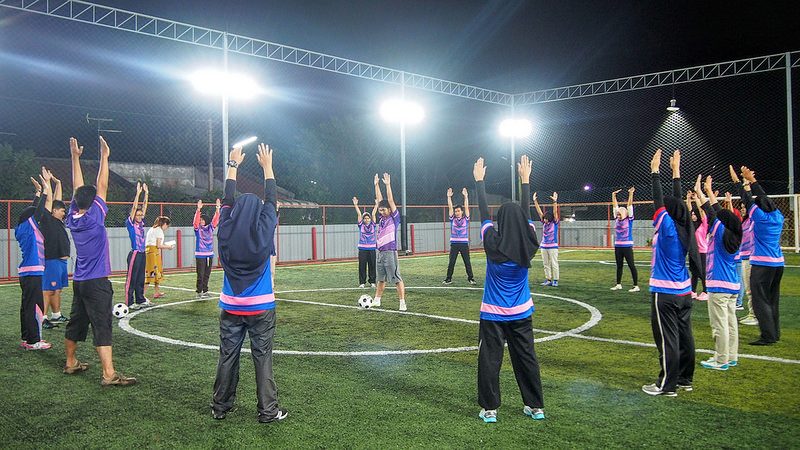 Anticha stated that women in the Deep South do not have many opportunities to exercise. Part of it is due to gender roles and women’s responsibility to take care of the house, their husbands, and their children. Teenage girls also have to help their mothers with the housework, and it is less acceptable for them to exercise in public than it is for teenage boys.

Moreover, exercise often requires women to wear pants and move their limbs about in the same space as other men, discouraging Deep South Muslim women from exercising. Of course, men and boys do not have this limitation, said Anticha. Public parks and playing fields are almost completely taken over by men.

Anticha believes there should be more support to create female exercise spaces in the Deep South, such as female swimming pools, which will give women peace of mind as they exercise.

This edited article by Thaweeporn Kummetha is from Prachatai, an independent news site in Thailand, and is republished on Global Voices as part of a content-sharing agreement. The text was translated by Asaree Thaitrakulpanich.