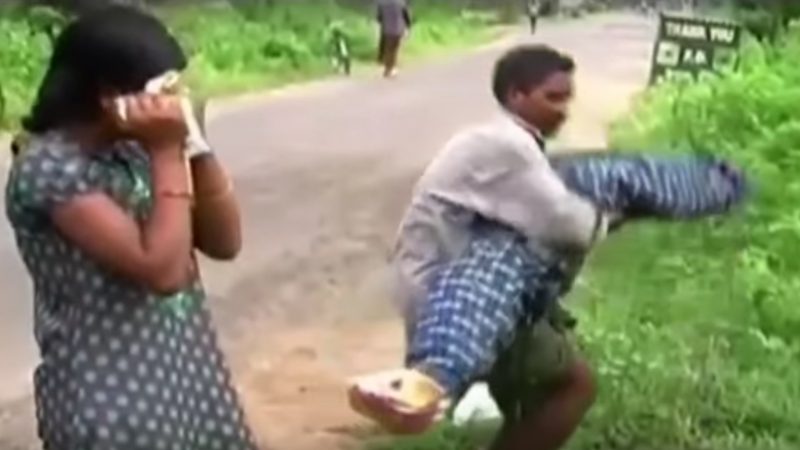 A tribal man, along with his 12-year-old daughter, walked around 10km carrying his wife's body on his shoulders as he failed to get a vehicle to transport it from a government hospital in Odisha's Kalahandi district where she died. (Screenshot from YouTube Video)

On August 24, 2016, 48-year-old Daana Majhi took his ailing wife, Amanga Dei Manjhi, to a government hospital in Kalahandi district in the Indian state of Odisha. She was suffering from tuberculosis and died around midnight.

Soon after, it is reported, the hospital asked Daana to take her away, but he was denied a free mortuary van to carry the dead body to his home. He pleaded with hospital authorities to arrange for a vehicle, but nobody helped him. The poor tribal farmer did not have enough money to rent a vehicle, so he decided to carry the body on his shoulder to the village for cremation. The hospital has since claimed that he walked away with her body without informing them.

Accompanied with his 12-year-old daughter, Daana wrapped his late wife's body in pieces of cloth and walked for about 10 kilometers towards his home. As dawn approached, people noticed him carrying his wife on his shoulder; at this point, his home in Melaghara village was still 50 km away. Local TV journalist Ajit Singh recorded a video of them that was shared by many people in India; after pulling some strings, local people arranged an ambulance and also managed to collect some donations to be put towards the funeral.

As the video — and other images — of Daana carrying his dead wife went viral, social media users exploded with anger:

We live in a country where a journalist didn't help a poor man carry his wife's dead body to his home so that he could make a news on it.

A CM gets cops to carry him on their shoulders so his shoes don't get wet. While a man carries his dead wife alone to the ghat. Waah India!

Should I support sports where lakhs r spent to arrange buses to felicitate winners while a man cant get even rickshaw to carry a dead body?

Daana is not the only person to face such insensitive treatment from a public health facility. On Friday, September 2, 2016, in Odisha's Malkangiri district, a man had to walk 6 km carrying his seven-year-old daughter's body, as the ambulance transporting them allegedly left them midway. When ambulance staff found out that the girl had died en route to the hospital, they asked her parents to get out of the ambulance and take their daughter with them. A First Information Report (FIR) has since been lodged at the Malkangiri police station against the driver, as well as a pharmacist and an attendant who were in the ambulance.

Unfortunately, there have been more such instances:

A man forced to carry his mothers dead body on his bike after an ambulance driver refused to take the corpse( M.P) pic.twitter.com/1D8H3LRpQy

The Odisha Human Rights Commission is currently probing an incident in which hospital workers in the Balasore district allegedly broke a corpse at the hip so that they could carry it in a bundle. The body was that of Taramani Barik, an 85-year-old widow who was run over by a goods train. After the accident, there was no ambulance available and no one to pay for a rented vehicle to take the body for an autopsy 30 km away to the district headquarters hospital.

These incidents all point to an anomaly in the area's health services. Among India's 19 states, Odisha ranks close to the bottom of the Human Development Index. Writing in Medium, Siddhartha Sharma noted that the Odisha state has two schemes to address such issues. There is Harishchandra Sahayata Yojana (assistance to the poor and destitute for last rites), which provides financial help to those unable to conduct last rites for their deceased family members — a program that also covers the cremation of unclaimed dead bodies. In addition, under the Mahaparayana Scheme 37, government hospitals are supplied with 40 vehicles and approximately 100 staff members to assist in carrying dead bodies. Siddhartha asked:

The state enjoys the privilege of two schemes for one purpose but why wasn’t the citizenry able to avail it?

Aparajita Mishra, at Being Indian, also had questions:

When Daana was carrying the corpse with his crying daughter, people assisted him by calling some ‘influential people’. Why do we rely on the crutches of power to get the job done?

Frankly if these are acche din [good times, a slogan of the ruling party], India was better off in the dark ages. Frankly, Mr Prime Minister, Balochistan can wait, let us fix our Kalahandis [people of Kalahandi district, Odisha] first.