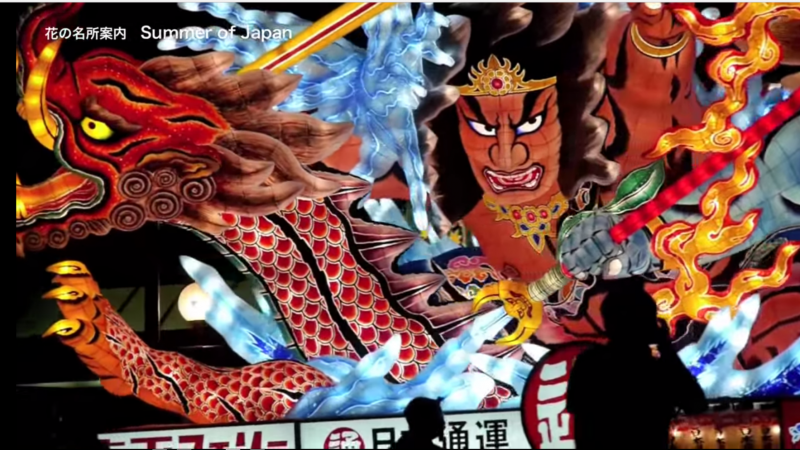 The Aomori Nebuta Festival is one of Japan's biggest and most popular annual festivals. As the name suggests, it is held in Aomori, the capital city of the Aomori Prefecture on the northern tip of Honshu — though it also takes place in the old castle town of Hirosaki, where it's called the Nebuta Festival — and over three days in August, features dozens of thirty-foot-tall illuminated floats resembling famous historical and mythological Japanese characters. It is a spectacular sight, and of course results in equally astonishing posts on social media.

There are various theories about the origins of the Nebuta festival. It's argued the festival may be a variation of the Tanabata festival, typically celebrated in many parts of Tohoku, also during the month of August. Another theory suggests that the floats, drums and dancing have been passed down from more than a thousand years ago, when armies from western Japan traveled to the northeast to subjugate out the indigenous Emishi inhabitants of the region.

We're at the Nebuta Festival in Aomori. We snagged some great seats so we have a great view. It was super intense! #AomoriNebutaFestival #summerfestivals #thebest!

It's hard to imagine how big these things are… ねぶたの大きさがInstagramあまりわからないけど…

The festival involves much more than just the giant, fantastically illuminated floats — flutes, drums and dancers all combine to create an unforgettable event. This year, one YouTube user uploaded an hour-long video that provides a good look at what the event involves:

An added bonus to this year's Nebuta Festival was that some Tokyoites got a taste of the event without having to travel all the way to Aomori. One community space in the capital city, Meguro Gajoen, hosted a two-month exhibition of Wa no Akari (Japanese-style illumination) in its culturally significant Hyakudan Kaidan (Hundred-Step Staircase) area.

I'm checking out Meguro Gajoen for the first time in a while: two floats are on display. #MeguroGajoen #NebutaFestival

Still, for many people who do make the trip to Aomori, the Nebuta Festival is the real thing — and a striking way to spend the summer:

“Don't hold back! Don't hold back!” #SummerFestival in the north country. I went and saw the #NebutaFestival. The site of a sixty-foot-tall Nebuta float was amazing. Let's enjoy the rest of the summer!