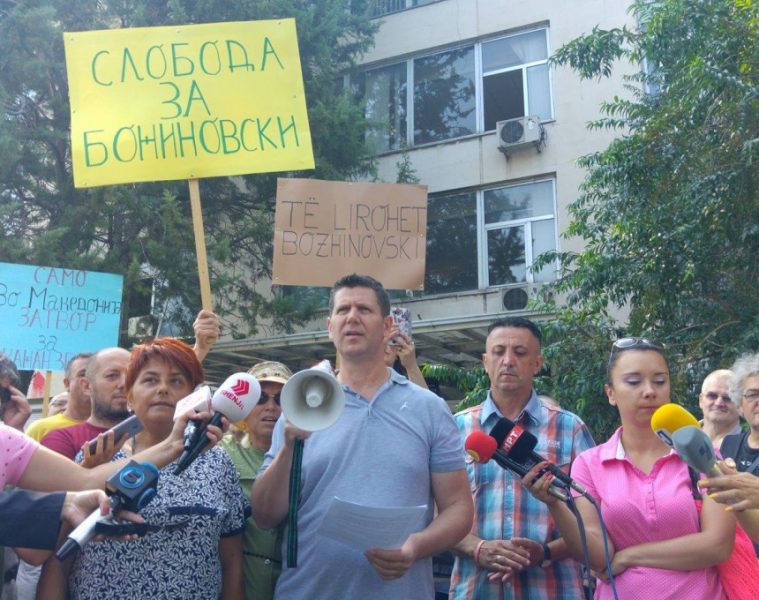 The Macedonian Association of Journalists organized a protest in front of the Criminal Court to demand the immediate release of journalist Zoran Bozinovski. Photo: Meta.mk, used with permission.

Macedonia's Criminal Court postponed the first hearing in the trial of journalist Zoran Božinovski several hours after his industry colleagues from the Macedonian Association of Journalists protested for his release in front of the court.

Božinovski is charged with criminal conspiracy, espionage and blackmail. He is one of 18 defendants in a case code-named “Spy,” which accuses a group of people — including former intelligence and police officers, the former director of the Office for Combating Money Laundering, and the former head of cabinet of the president of the Parliament — of spying on behalf of Greece and Hungary. Three years ago, he was arrested in Serbia where he had sought political asylum, and in April 2016 he was extradited to Macedonia.

Božinovski's supporters claim the case against him is retaliation for his work with the web portal Burevesnik.org, which in the past has published leaked information implicating Macedonian politicians in corruption.

Macedonian Association of Journalists President Naser Selmani said they had organized their protest to show solidarity with Božinovski:

We remind the judges that in Europe, only Macedonia and one other country have reporters in jail. First, Tomislav Kežarovski was sentenced and now Božinovski. We now wonder who will be next. In a country where journalists are jailed, freedom of speech and freedom of the media are under assault. Such cases are intended to punish the disobedient journalists and intimidate and discipline the others.”

Tomislav Kežarovski was sentenced for four and a half years in prison in 2013 for allegedly publishing the name of a protected witness in a 2005 murder case. After wave of protests and support from journalists’ associations and other international organizations, Kežarovski was released at the beginning of 2015. He spent seven months in prison and the rest of the sentence in house arrest.

In similar manner, the Association demanded that Božinovski be immediately released from detention on bail, referring to recent examples when some former officials were allowed to wait for their trial from home instead of prison. They also insisted that the regular Prosecutor's Office hand Božinovski's case over to the independent Special Prosecutor's Office, arguing that not doing is a sign that the charges against him are revenge for publishing evidence of abuses of power. 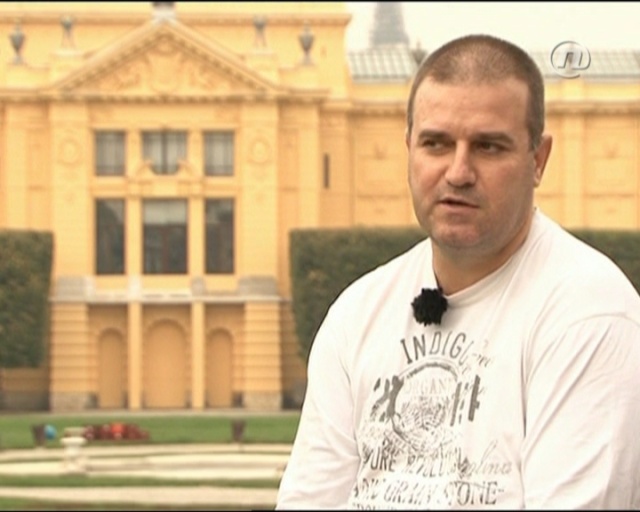 Still image of Zoran Bozinovski from an interview with Croatian Nova TV.

Božinovski's trial is separate from the others’ accused in the ‘Spy’ case. The 17 other defendants were found guilty in 2014 and sentenced from one to 15 years in prison, but their convictions are now being disputed in the Court of Appeals. After the Special Prosecutor's Office was formed as part of a deal to end ongoing political crisis in the country, the office demanded to take over their case, which the Court of Appeals allowed.

Several hours after the Association's protest, the Criminal Court postponed the beginning of the trial, according to local Nova TV. The channel quoted judge Aleksandra Krstic explaining that although she requested the Court of Appeals to submit all evidence related to the case, they still hadn't done so.

The case began in 2012 when authorities accused a group of people, including government critics and whistle-blowers, of spying on behalf of Greece and Hungary. Both countries are members of the European Union, while Macedonia is not; it has been a candidate for membership since 2005, but talks haven't gone far due in part to objections from Greece over a long-standing dispute about Macedonia's name and Macedonia's lack of progress in stamping out corruption and election fraud.

Macedonia did not issue any diplomatic notes to these countries condemning them of spying, however. In fact, three months later, Macedonian President Gjorge Ivanov praised Hungarian President Viktor Orbán as being “a great friend and supporter” of Macedonia.

By October 2014, the justice system had convicted 17 of those accused. Božinovski, however, had emigrated to Serbia fearing for his safety some time before. Serbian authorities arrested him in 2013 on the basis of an international warrant, and after nearly a year in jail waiting he was brought back to Macedonia.

Human rights groups and free speech advocates condemned his extradition and warned that Božinovski could be vulnerable to torture once back in Macedonia.

The anti-torture committee of the Council of Europe published a report in March 2016 expressing deep concerns about Macedonia's penal system due to “numerous consistent allegations of ill-treatment of detainees by custodial staff.”

And leaked wiretaps published by Macedonia's political opposition in 2015 revealed a conversation between Martin Protuger, the right-hand man of Macedonia's then-Prime Minister Nikola Gruevski, and the then-Minister of Interior Gordana Jankuloska in which the two discuss how to torture Božinovski once he's within their power. Protuger requests to pay him a visit “with the CCTV camera turned off in that time.” They also discuss arranging his rape by other inmates as something “that goes without saying.”

The wiretaps captured Macedonia's elite talking about a wide variety of other misdeeds and sparked a political crisis in the country. An EU and US-brokered agreement tried to stalemate, stipulating among other things that an independent Special Prosecutor's Office be formed to investigate the revelations contained in the leaked conversations. President Ivanov, however, announced on April 12, 2016, that he was granting a pardon to more than 50 top politicians and their associates who were under investigation.