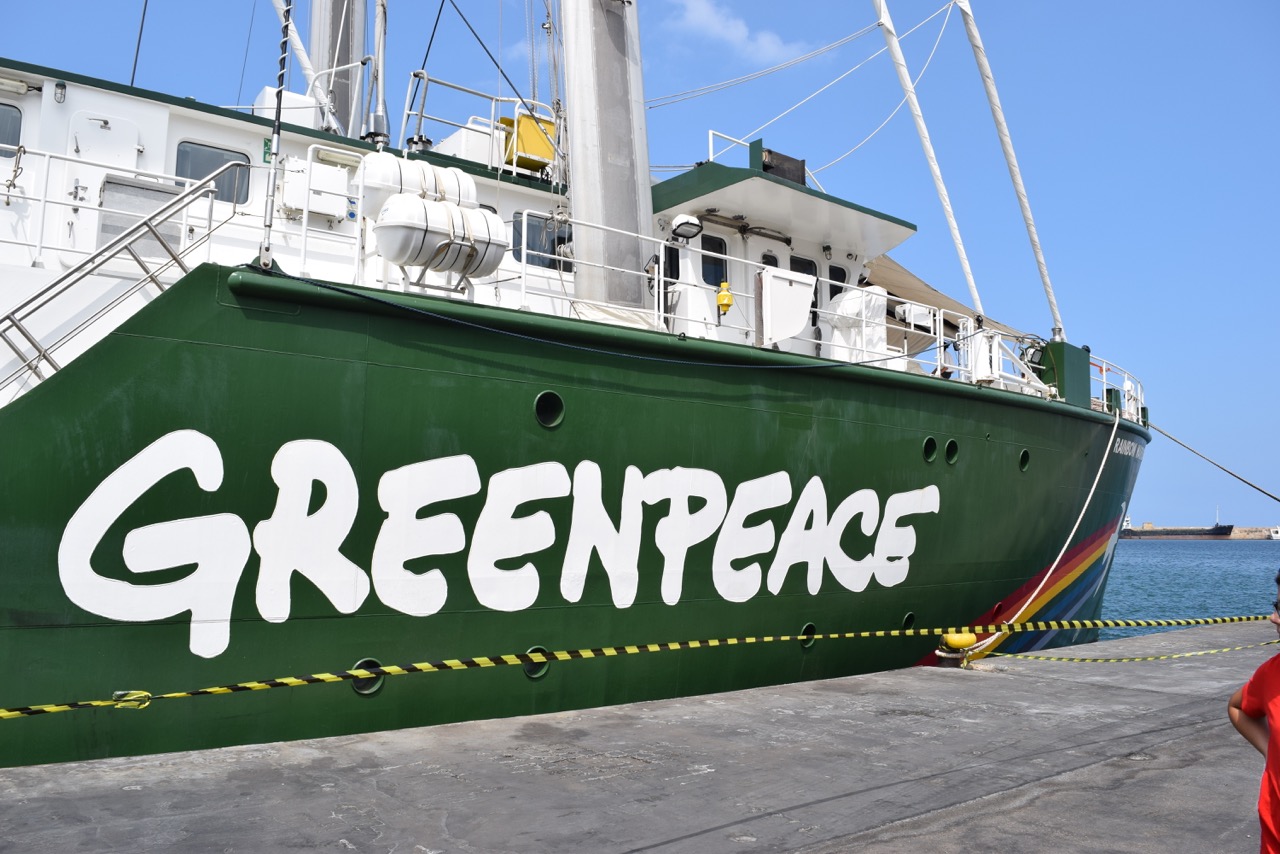 Greenpeace‘s ‘Rainbow Warrior III’ docked in the Port of Beirut on August 26, 2016, for the first stop of the international environmental NGO's tour advocating the use of solar energy in Mediterranean countries.

The ship supports Greenpeace's campaigns in defense of the environment, including spotting illegal fishing activities, and its solar energy mission was particularly important in Lebanon, a country which has seen its fair share of environmental catastrophes in the recent past.

Lebanon has faced an energy crisis since the end of the civil war in 1990. To this day, Lebanon is plagued with daily power outages that can last up to 18 hours depending on the region, forcing most Lebanese to make use of private diesel-powered generators. Successive governments have so far been unable to bridge the gap between the 1,800 MW produced and the 3,000 MW consumed at peak times, with current power plants obsolete, polluting and in dire need of refurbishing. “The latest power plants in Lebanon were built in 1996 in Deir Ammar and Zahrani, each with a 450 MW capacity”, far below the energy requirements, the Lebanese newspaper The Daily Star reported.

As one former senior official of the state-owned Electricite du Liban told The Daily Star:

If we don’t build more power plants then we will continue to live under harsh cuts every day. The solution is not in our hands but in the hands of the government.

Furthermore, the prospect of offshore oil and gas drilling — currently being discussed as a potential solution to the country's current energy crisis — sheds light on another issue. Although enticing, oil and gas extraction cannot, by definition, provide a sustainable solution on any level. And with Lebanon's notorious levels of corruption, these energy resources may well end-up being a curse for local communities.

In the words of Peter Willcox, captain of the Rainbow Warrior III:

It is time for people here to embrace what shines in the sky 300 days a year, not what’s tapped from the ground. It is not just about building a sustainable renewable energy future for the region, it’s about tipping the balance away from fossil fuels for the health of the planet while self-empowering local communities.

Of course, the Rainbow Warrior III could not but remind the country as well of its ongoing year-old waste management crisis, largely credited for launching the ‘You Stink’ movement in the summer of 2015, which saw tens of thousands marching in the streets against the government. The crew of the ship sorts their waste, placing every different waste category in its proper bin, and the idea is to recycle it in the country where it is docked.

Notably, Greenpeace opted against recycling any of the waste it produced while in Beirut, instead deciding to keep the waste on board and recycle it at the boat’s next destination, Turkey. The Lebanese government has so far been incapable of finding a sustainable solution to this issue as well, with even temporary propositions — landfills in the Bourj Hammoud and Costa Brava areas — facing obstacles in implementation by locals, while civil society’s proposed integrated waste management plans were shunned and put aside.

With waste back on the streets in the past few days and the political deadlock currently on hand, Lebanon seems to be nowhere near a solution for the crisis.

Greenpeace is also supporting a women-run “cooperative for agricultural production and manufacturing” located in southern Lebanon. The organization trained 12 young men, Lebanese, Syrians and Palestinians, to build solar panels in order to meet the energy demands in regions that can sometimes have up to 22 hours of electricity shortages.

One member of the cooperative, Daad, explained the importance of solar panels for her region:

We are forced to work manually while our electrical machines are not being used. If we had electricity round the clock, we would have a greater production. Our work would greatly benefit the women working here as well as the growth of the cooperative.

The cooperative launched an online fundraiser with the hope of raising $50,000 in the next two months. They explain on the site how the money will be used:

The solarization of the women cooperative center will start with an energy audit that will identify its energy consumption. Then, a set of energy efficiency measures to reduce energy consumption such as lighting retrofit and piping insulation will be implemented. Finally, a solar energy system will be installed on the roof of the Cooperative.

The Rainbow Warrior III is the first ship of Greenpeace’s fleet specifically built for the organization. It started operating in October 2011 after the second Rainbow Warrior retired. The latter in turn replaced the original Rainbow Warrior after it was bombed in 1985 by French agents off the coast of New Zealand.

The ship is scheduled to end up in Morocco in time for the UN's COP 22 on November 14-15, 2016. Unlike previous UN Conferences of Parties, the COP 22 will be the first COP since the “legally binding global climate target was agreed [at COP 21] by all 196 member parties with the aim of capping climate change well below two degrees of warming”.