There's Finally a Programming Language in Bengali Script, Thanks to ‘Potaka’ 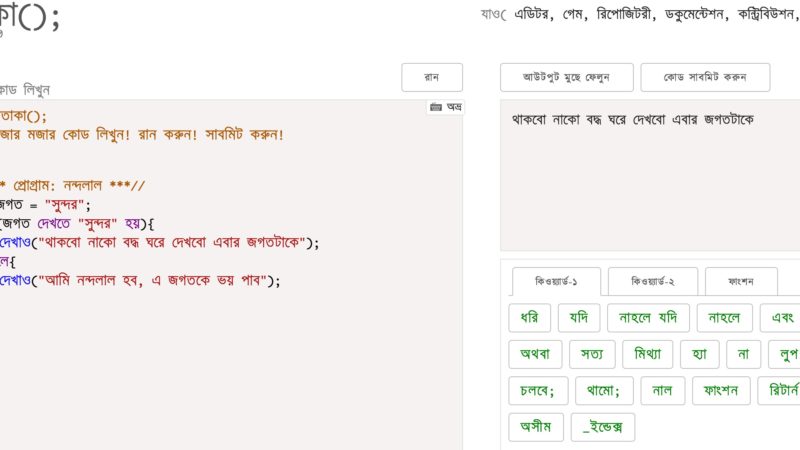 Screenshot of the editor of Potaka programming language

A group of Bangladeshi programmers have created a programming language written entirely in Bengali script. It’s called Potaka (Flag), and it’s aimed at encouraging children whose first language is Bengali to get interested in programming.

About 220 million people in the world actively use the Bengali (also known as Bangla) writing script, making it the sixth most used in the world. Potaka is the first stable programming language to utilize commands in Bengali and is available online for free. You do not need to download any software; just a web browser and an internet connection are required. In 2014, a similar attempt was made with the introduction of Chascript, which is not available now.

Ikrum Hossain, a software engineer at Norwegian telecommunications company Telenor, teamed up with software engineers Osman Goni Nahid and Rakib Hasan Amio to develop Potaka. In an email interview with Global Voices, Hossain mentioned that he came up with the idea for Potaka based on problems he faced himself.

I started by writing programming tutorials on my blog, ApiKothon.com. It was for advanced students, so then I realised I need to do something for very beginners and specially for kids. If children become familiar with programming concepts at an early age, that might help grow the Bangla programming community.

He puts developing Potaka down to his own personal experiences. When he began learning how to program by himself, he was in his first semester as an undergraduate. He comes from a rural area, and for him and other students who didn’t have strong English-language skills, it was very difficult to learn from tutorials available online. Almost everything he came across was in English, and very few resources were available in Bengali.

In his mind, one of the biggest barriers for Bengali speakers to learning programming is exactly this: having so few resources available in their mother tongue, and a fear of diving into an already complicated new realm. By removing the prerequisite of having a high command of English, he hopes that Potaka can remove some of that fear and help children get a first taste of programming in Bengali.

To work out how to structure it and what features it should have, he did a lot of research work with people who didn’t know how to program. He showed them an existing programming language, C, and compared it with early versions of Potaka. As a result, he decided to keep the syntax of Potaka close to actual speech in Bengali to make it as easy as possible for newcomers to understand.

Potaka is also fairly unique in that it includes games and jokes to increase its accessibility to children, and hopefully also to pique their interest. 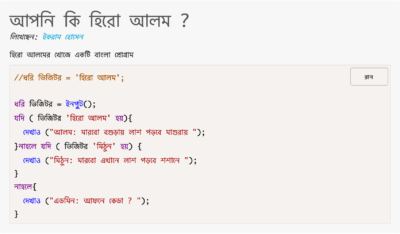 One program, as shown in the screenshot above, includes the dialogue of a character called Hero Alom, who plays a character similar to well-known Indian actor, Mithun Chakraborty, who is popular in Bangladesh. Here, the lessons in learning the code are delivered in Hero Alom's speech style, which brings a kind of “street Bengali” to an otherwise formal setting. The aim with this kind of approach is to bring humour to the coding language and platform, and Hossain says it was very popular with the community.

Taking into account the low levels of internet access across Bangladesh, the next step for Potaka will be to release an offline desktop version soon, which can be used without being connected to the internet. Their dream is for rural students to also have the opportunity to learn about programming — but they’re conscious that this will require many more people to get involved.

Above all, Hossain says he won't be able to solve all the problems he’s seeking to address with Potaka on his own. Because of this, he’s trying to build a community around Potaka, and has made it open source from the beginning. Before the beta release, he and two other dedicated developers worked hard to bring it live — for him, it's important that they build community around it, and make the project sustainable after the initial hype. Currently, he says, he is dedicating one-third of his salary towards supporting Potaka, but this is not a sustainable solution.

At a time when both internet infrastructure and resources are heavily skewed towards those communicating in Latin script, the creation of Potaka is a welcome change. It joins relatively few other existing programming languages not written in the Latin script, such as قلب (Qalb) written in Arabic, and Dolittleドリトル doritoru in Japanese.

On social media, reactions have largely been positive.

Ariyan Hasan wrote on Facebook with a happy emoticon:

Now programming will be done in Bengali :D

If all programming language were this easy, would it not be fun?

Online, some people have also offered words of caution to the creators of Potaka. IT specialist, mentor and open source evangelist Munir Hasan congratulated Potaka and mentioned on his blog:

A friend of mine likes to say “there are two kinds of people in the world–the people that build the future, and the people who write posts on the internet about why they’ll fail”. Keep trying to be in former category.