Oh, the Phrases You'll Hear on the Streets of Buenos Aires! 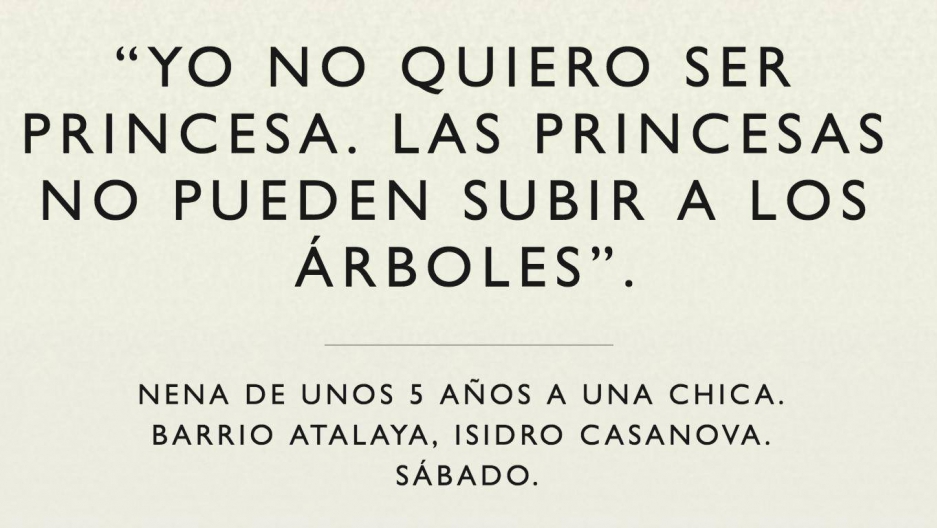 This article by Maria Murriel originally appeared on PRI.org on August 24, 2016. It is republished here as part of a content-sharing agreement.

You're sitting in a cafe in Buenos Aires’ Palermo neighborhood. You can't quite hear what the pair next to you is talking about, but you can make out some things. Maybe something like, “You think I have nothing better to do than be in love with you.”

OK, that one was actually overheard on a subway. But when Ezequiel Mandelbaum and Tatiana Goldman were in a Palermo cafe one day, about five years ago, they thought the stuff they overheard was so intriguing, out of context, that they stopped talking to each other.

“We didn't understand what they were saying too well,” Mandelbaum says. “But it was fun.”

Note: Most of these phrases are nearly impossible to translate in a way that captures their full glory. But this is close.

“What confidence we Argentines have to do whatever the flying f-ck pleases us.” — Man of about 25 to another. Friday.
Credit: La Gente Anda Diciendo/Facebook

But what they came up with that day is more than fun. La Gente Anda Diciendo (“People Are Saying”) is a “playful anthropological” glimpse into the Argentine mind and lifestyle — specifically in the capital. Mandelbaum and Goldman collect Buenos Aires phrases that betray the dry wit, blunt manner and casual attitude about love and life the locals have (even the little ones).

“In Buenos Aires, it’s easy [to overhear good stuff],” Mandelbaum says. “I don’t know if it’s because we shout a lot or because we’re not prudish. We can be on a bus, talking to the gynecologist at full volume. … Argentines get psychoanalyzed, it’s common to hear someone analyzing their partner’s life.”

“Will you buy me a toy so I can stop busting balls?” — Boy, approx. 4 years old, to his parents. Friday, 7 p.m.
Credit: La Gente Anda Diciendo/Facebook

“Yo, can you pay for tits with a credit card?” — 25-year-old woman to another. Bus. 2 pm.
Credit: La Gente Anda Diciendo/Facebook

“Think of it this way: A baby is like a dog that you can, later, ultimately, teach how to talk.” — Man of around 25 to his girlfriend. Transit station. Saturday, 12:40 pm.
Credit: La Gente Anda Diciendo/Facebook

The original idea was to jot down phrases heard throughout Buenos Aires and make them into a book. After nine months of collecting phrases, Mandelbaum and Goldman decided to post them on Facebook. Overnight, they gained hundreds of followers, which then turned into thousands and tens of thousands.

The allure is the sharpness of the phrases, and the situations they allude to. There’s an art that goes into selecting phrases for this project.

“When you catch part of a sentence, it builds a story in your mind,” Mandelbaum says. “[We pick the] potent phrases, the ones that stir your imagination, that are funny.”

Now that fans submit 100 percent of the phrases, the most important element of this art is even more important: They have to be overheard and written down immediately.

“Look, you have to live life with a partner. It's always been hard. The problem is you guys don't try anymore.” — Man of about 60 to a man of about 20. Plaza Constitución. Thursday.
Credit: La Gente Anda Diciendo/Facebook 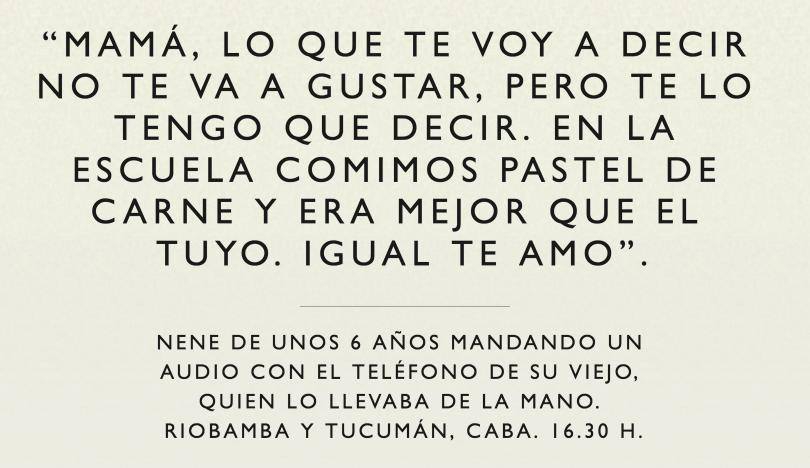 “Mom, you won't like what I'm gonna tell you, but I have to say it. At school we ate meatloaf and it was better than yours. I still love you, though.” — Kid of about 6, walking and recording an audio message on his dad's phone, holding his hand. 4:30 pm.
Credit: La Gente Anda Diciendo/Facebook

“It’s intuitive [telling which are made up],” says Mandelbaum, who’s an editor working in public relations. “You have to hear it and write it down then. When you try to write it down later, you edit the phrase in your head.”

And there’s more coming: Mandelbaum says he and Goldman are hoping to have writers come up with texts inspired by the phrases.

With phrases like these coming in, that won’t be hard.

“See that you can? You can do anything in this life.” — Mom of about 30, wiping her 9-year-old's boogers. Tuesday.
Credit: La Gente Anda Diciendo/Facebook