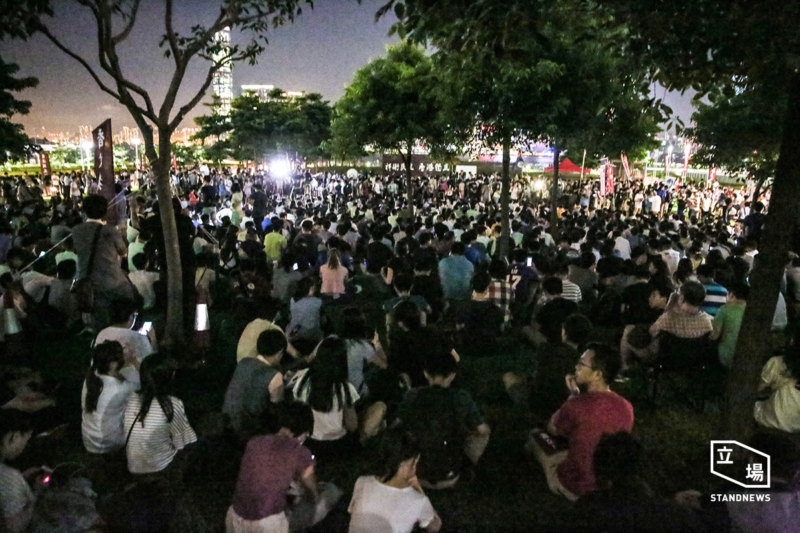 While a majority of Hongkongers agree that independence for Hong Kong is politically impossible, more and more claim to support independence simply to agitate Beijing.

In a poll in July, about 17.4% of respondents [3] said they were somewhat or even strongly supportive of Hong Kong independence.

As anticipated, that result has upset Beijing which has seemingly demanded the Hong Kong government stop people from talking and fantasising about separation with mainland China.

Henry Kwok, a teacher and a political affair critics explained [5] the motivation behind the rise in independence rhetoric:

The independence rhetoric is deliberately obtuse to send Beijing’s nerves into overdrive. I don’t know whether [pro-independence candidates] could gather much steam to beat the big parties and become a ruling political force in the coming election. However […] the rhetoric of localism has pushed the frontiers of political discussions. What the localists want is actually quite modest and completely innocuous: to uphold the ‘one country, two systems’ constitutional principle and [achieve] greater political autonomy from China for the city.

According to the “one country, two systems” principle underwritten in the Sino-British Joint Declaration, Hong Kong's previous capitalist system and its way of life would remain unchanged for a period of 50 years until 2047.

But Beijing has been showing signs of impatience in recent years, encroaching more and more on Hong Kong's internal affairs.

This was particularly apparent after 2012 when Leung Chun-ying was selected by the 1200-member election committee as the city's Chief Executive with Beijing's blessing.

In fact, Leung has been ironically nicknamed the Father of Hong Kong's independence movement for bringing to public attention an article published in a university magazine that discusses the possibility of Hong Kong's separation [6] from China in a 2015 policy address.

His effort to create a political scarecrow out of the article, has added fuel to antagonism concerning Beijing’s interventions into Hong Kong affairs, pushing localist groups towards radical politics.

Government critic Big Lychee spelled out [7] the political psychology of the localist movement:

To clamp down on pro-independence discussions, Hong Kong's Secretary for Education Eddie Ng Hak-kim asked [8] 30 public school principals to ban Hong Kong independence activities in their schools and threatened that teachers may lose their qualifications if they do not carry out the order.

After making the comment, Ng then departed to Beijing.

One item on his agenda in meetings with officials from China’s Ministry of Education was reportedly an exchange of views [9] over the independence sentiments “invading schools” and other places where young people congregate.

The student groups slammed the Education Bureau and vowed they would continue discussing Hong Kong independence.

A referendum is the most civilised and fair way for the people to decide, many places do the same, Hong Kong independence is only one of the options. Why can’t Hong Kong people discuss their own future?

Members of our group do not necessarily support independence in a very serious manner, we just hope that Hong Kong people can take back our power over the city.

Beijing authorities in Hong Kong, meanwhile, felt unable not to comment on the situation.

Wang Zhenmin, the Director-General of the Department of Law of the China Liaison Office criticised the Hong Kong government for being too lenient on pro-independent activities and stressed [11] that the idea of Hong Kong's independence should not be allowed into policy, legislation, the justice system, or primary and secondary schools.

Vice minister at China’s Ministry of Justice Zhao Dahheng echoed that “there is no room” for discussion of Hong Kong independence.

Their views are echoed by pro-Beijing groups and government officials.

President of the pro-Beijing teachers’ union Hong Kong Federation of Education Workers, Wong Kwan-yu, condemned the student groups and stressed that “Hong Kong independence harms society – that can be judged by common sense.”

Some education groups have started issuing guidelines to schools and teachers [12] regarding how to handle the political subject “responsibly” and “objectively”.

And in one of the most sinister developments in the saga yet, Hong Kong government’s Executive Councillor Fanny Law Fan Chiu-fun further urged [13] schools to meet with the parents of students who wish to set up groups to advocate independence from China, in order to “understand how their family background affected them.”

Upon returning from his Beijing trip, the head of Education Bureau Eddie Ng Hak-kim suggested [14] schools report to police incidences of in the form of pro-independence pamphleteering in their vicinity.

Kent Ewing, a teacher doubted [15] such measures would reduce talk of independence:

Shutting [pro-independence groups] out shows weakness and insecurity while also undermining one of the core values, free speech, that laudably separates us from authoritarian states like Singapore—whose leaders, despite their many accomplishments, have created a micromanaged nanny state with a shackled media and stunted populace. Moreover, harsh measures only provide added motivation to radical fringe groups whose very existence is dependent on confrontation with the government—the more, the better.

Now, thanks to the short-sightedness of city officials—from the chief executive to education chief Eddie Ng Hak-kim to the luckless returning officers responsible for barring some  of the pro-independence candidates from [participating in] next month’s Legco elections—the city is moving into dangerous and uncharted territory.

The writer also anticipated that the ban would further politicise schools and turn classrooms into a battlefield:

And, now that the Education Bureau has proscribed support for independence in schools, what happens when students return to classes next month and pro-independence groups like Studentlocalism take their campaign into their classrooms? Will they be suspended, expelled or worse?