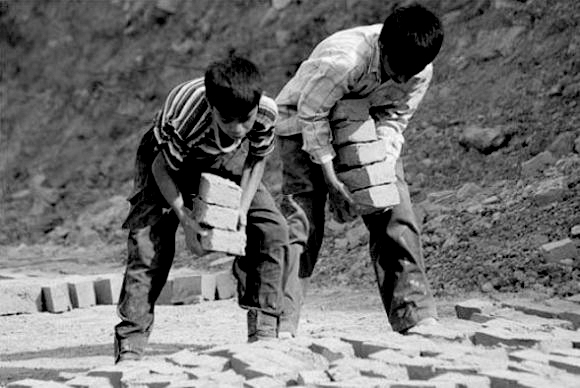 Child labor and exploitation remains a widespread problem throughout much of the world. The issue is centered around exploitation, trafficking and governmental negligence and presents a challenge for those living in closed societies which lack transparency, and social support systems.

The exploitation of children has become increasingly prevalent in Iran, and remains uninvestigated by authorities and the outside world.

The current geopolitical realities in the Middle East and the wave of refugees, combined with widespread failure in governance, have created the perfect storm for a rise in the exploitation of children. Iran’s location within a corridor of war-torn countries, coupled with state corruption and lack of a social safety net have exacerbated the issue. Iran has consistently been listed as a Tier 3 country for human trafficking by the US State Department. The Iranian regime itself has also been implicated in human trafficking and the exploitation of children.

Unfortunately, the issue of child labor is not new to Iran. Historically low-income families with multiple children have viewed their offspring as a source of labor and income for the family. In some cases impoverished families would send children off to serve as servants in the homes of wealthier Iranians.

However the problem has now grown beyond one of culture and economics, to one of exploitation and negligence. In a 2012 interview with Amsterdam-based Persian language radio Radio Zamaneh, Ali Akbar Esmailpour, who heads the Association for the Protection of Children’s Rights, pointed to a lack of information and accountability as one of the first challenges in tackling this problem:

The only information at hand is the statistics regarding street children, because they are very visible, but this does not give the complete picture.

Esmailpour pointed out that there a systematic failure to enforce child labor laws by the Ministry of Labour, stating “children sometimes work between 12 to 16 hours under very bad conditions without the slightest safety or hygienic considerations.”

Under Iranian law, child labor is prohibited until the age of 15, but there remains a loophole which promotes the exploitation of children. Many children under the age of 15 are often employed in a domestic setting and are not reported as employees but remain subjected to exploitation and mistreatment. According to a recent report published by a slew of civil society organizations, a 2011 national census reported 68,558 working children between the ages of 10 and 14 and 696,700 between the ages of 15 to 18.

“This is a problem largely ignored or even denied by governments. Child labor is one of the most outrageous realities and demands immediate attention and action,” Akbar Yazdi, director of an Iranian NGO that aids children in labor, told the Iranian English-language newspaper Financial Tribune.

‘I wake up every morning crying’

The issue is not only limited to child labor. An estimated 200,000 children live on the street in Iran — as much as half of this number are thought to be Afghan children. Many of these children are runaways, fleeing difficult circumstances or refugees from Afghanistan or Iraq. Refugee children are often particularly vulnerable within society.

A March 2011 article by the Institute for War and Peace Reporting, an independent organization that supports local reporters, citizen journalists and activists in countries in crisis, reported that Afghan children were picked up by the security forces and deported back to Afghanistan. Some of these children had never been to Afghanistan before and appear to have been deported without their parents knowledge.

Abdul Majid, a 12-year-old Afghan refugee, was sent alone back to Afghanistan, without the knowledge of his family, who remained in Iran. “The police beat me up,” he said in an interview in Ansar refugee camp in Herat province:

They asked me whether I was involved in violent groups. I swore I wasn’t connected with any. They finally deported me after eight days, and sent me to Afghanistan.

The case of Abdul Majid is just one of hundreds of Afghan refugees who are denied legal counsel and deported back to their country of origin, something which is illegal under international law.  The children are often beaten in custody and denied food before they are sent back to a country in which they have no one. Majid, weeping, said:

I dream every night that my parents and brothers and sisters are looking for me. I wake up every morning crying.

Iran is also a prime hub for human trafficking between Pakistan, Afghanistan and the Gulf States. According to the UN, the fact that human trafficking presents a lower risk for criminals than trafficking in drugs under Iranian law makes the practice “a very attractive business alternative to drug trafficking bands in control of the southern drug smuggling routes” (see page 4 of UN Office on Drugs and Crime, Iran report).

The Iranian regime has also reportedly prosecuted victims of sex trafficking for committing what it claims are “unlawful acts” including adultery, despite the fact that victims are often under duress as direct result of being trafficked.

The policies of the Iranian government continue to defy international norms and regulations, demonstrating the systematic violation of the rights of children and the government’s complicity with human trafficking within the country. Though the regime has taken some steps to curb human trafficking, its behavior and legal regulations suggest otherwise.

Though Iran is a party to the Convention for the Rights of Children, its policies are in stark contrast to the articles of the convention, including those which guarantee the safety of children without guardians, and refugee children. Iran is also not currently a party to the 2000 UN Trafficking Protocol, an important international agreement focused on the prevention of human trafficking.

The lack of democratic will and societal transparency have made reporting on this issue a challenge for activists inside and outside of Iran. Iranian journalists and child activists who have sought to confront this issue are not only faced with a lack of cooperation by authorities, but have been subjected to threats and arrest by authorities. While the majority of the world focuses on the international and political issues surrounding country, Iran’s children remain largely invisible and forgotten.

For reports on this subject in Persian, see here.