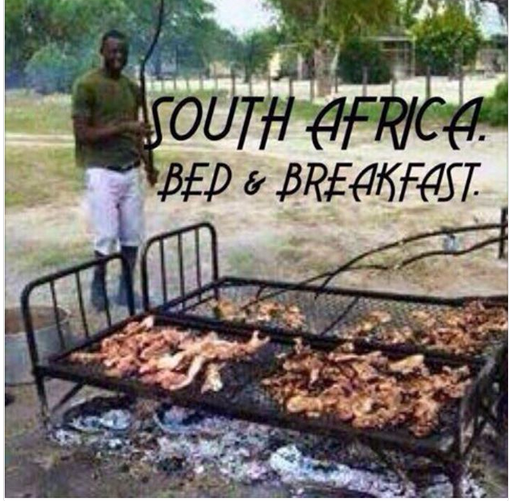 “#IfAfricaWasASchool all dormitories would be located in SA…” A “South Africa: Bed and Breakfast” meme shared on Twitter by different users such as @ColloTheBoy.

African Twitter users are at it again, making fun of the continent, its countries and their leaders.

Last year, it was the #IfAfricaWasABar hashtag. This time, Africans are using #IfAfricaWasASchool to make hilarious comparisons between aspects of school life and aspects of daily life in African countries.

Here's a selection of some of the better tweets published on Twitter.

#IfAfricaWasASchool this would be that kid who never misses school, all he misses are the answers pic.twitter.com/qoppfO8Bz5

The rand is South Africa's currency. Zuma has no formal education.

On President Yoweri Museveni of Uganda:

Museveni has been Uganda's president since 1986, and he won a controversial fifth term in February 2016 elections with over 60% of the vote. The political country's opposition claims that the poll was rigged, and international observers and human rights groups have also criticized the election process. Many of the country's leading opposition figures have been placed under house arrest for months. Authorities have shut down social media more than once in what some see as an effort to stymie discussion.

On President Muhammad Buhari of Nigeria:

#IfAfricaWasASchool buhari will be that class captain that takes delight in writing names of noise makers.

In Nigerian primary schools, a pupil is usually appointed class captain, whose job is, among others, to compile a list of fellow students who make noise in the absence of a teacher. This list is usually handed over to the teacher and those involved are punished..

On President Robert Mugabe of Zimbabwe:

#IfAfricaWasASchool how Mugabe will respond every time he is asked to retire from being a principal pic.twitter.com/lP6Md2We8w

President Mugabe, 92, has been Zimbabwe's president since 1987.

Egypt sits mostly in Africa, but parts of the country stretch into Asia. Many Egyptians don't consider themselves to be African.

#IfAfricaWasASchool Zambia is that religious student who thinks prayer solve everything
“there is a snake in class run”
Zambia : Lets pray

Zambia's leaders have a tendency to calling for national prayers to solve problems such as power shortages, election violence, depreciation of the local currency etc. In October last year, President Edgar Lungu called for national prayers and fasting on to ask God to intervene in the country's many issues of the day. Zambia's constitution declares it a Christian nation.

Zimbabwe is set to print its own version of US dollar due to cash shortage in the country. The country introduced the US dollar after abandoning its own currency because of hyperinflation.

#IfAfricaWasASchool Madagascar would be the kid no one invites to a party coz they live out of town.

The island of Madagascar is about 400 kilometers (250 miles) off the eastern coast of southern Africa.

Kenyan runners have dominated long distance races for many decades.

#IfAfricaWasAschool South Africa would be the student who starts his stories with “Man,Last night was crazy! Remember that girl from…..”

#IfAfricaWasASchool everyone would befriend South Africa.. Just so he could be invited for a sleep over … In Cape Town.

.@_Almaqah every time Ethiopia reminds the other kids for the 1000th time it was never colonized #ifafricawasaschool pic.twitter.com/iM4nFl6NOO

Ethiopia and Liberia are the only countries in Africa that were never colonised.

The continent of Africa

Other tweeps joked about the continent in general:

#IfAfricaWasASchool then this would be the sort of questions and answers during normal class lessons. pic.twitter.com/5S9hPJ8lXq

#IfAfricaWasASchool America and China will always be fighting to sponsor the school.

#IfAfricaWasASchool
White exchange student: Can y'all teach me African
Everyone: pic.twitter.com/5sTBIKuQCr

#IfAfricaWasASchool This would be one of the privileges of being a Prefect. pic.twitter.com/Zk3SlamnCI

Finally, the African Union was not spared:

When you suggest to the student body that the African Union can help solve campus issues pic.twitter.com/K3SSLEIq3w