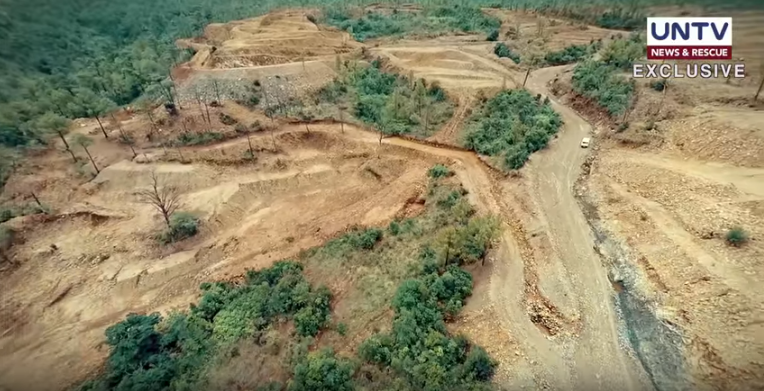 Screenshot of a drone video showing the impact of a mining site in Zambales province. Image from the YouTube video of UNTV

The Philippine government has identified mining as a key industry that will boost the country’s economy. Because of the generous incentives provided by the government to foreign investors, mining operations have intensified in recent years.

Tax revenues slightly increased and temporary jobs were created in remote communities but overall, mining only had a minimal contribution to the economy. Some researchers have even pointed out that the extractive industry played an insignificant role in poverty eradication. Worse, it generated a huge amount of mining waste, which destroyed the biodiversity in several provinces, and it displaced indigenous peoples from their ancestral domains.

A growing number of affected residents, media groups, and environmentalists have been documenting the harmful impact of mining. Amateur reporters and investigative journalists are using mobile phones and even drones to expose how mining is destroying the country’s watersheds and rivers.

In the province of Zambales, located in the country’s biggest island, the governor suspended all mining operations because of complaints against the pollutive and illegal activities of mining companies. The governor accused mining firms of exploiting the province in the past 75 years while poverty worsened in the mining communities. Mining firms are denying the charge.

He even denounced the mining firms for exporting the rocks and soil of Zambales to China which were allegedly used to reclaim some portions of the South China Sea. The Philippines has accused China of violating the country’s territorial integrity in the South China Sea.

The broadcast network UNTV visited Zambales to verify the statements of the governor. The media company used a drone to document the impact of mining in Zambales. The footage captured the destruction of hills and valleys in the province.

Meanwhile, journalist Pia Ranada uploaded a short video of a mining operation in Surigao. The province is located in Caraga region in Mindanao Island, the country’s mining capital.

The video clearly presented what is fundamentally wrong in the country’s mining industry: mineral resources extracted from the mountains are deposited in barges and ships to be immediately transported to other countries for refining and processing. Activists are asserting that the export-oriented mining industry perpetuates plunder and underdevelopment in the country's rural areas.

In Agusan province, also in Caraga region, a YouTube user uploaded another brief video of the dirty legacy of large-scale mining:

In Cantilan, also in Caraga region, a mining firm has been accused by local leaders of polluting a river system:

Because of the rising incidents of mining disasters and the visible destructive impact of mining across the country, protests have also been organized in recent years. In fact, the new environment secretary of the government is a known crusader against large-scale mining. The country’s new president also suspended the operations of mining firms which were found guilty of violating the country’s environmental laws.