The ‘Different Yet Equal’ Protest Politics of Sri Lanka 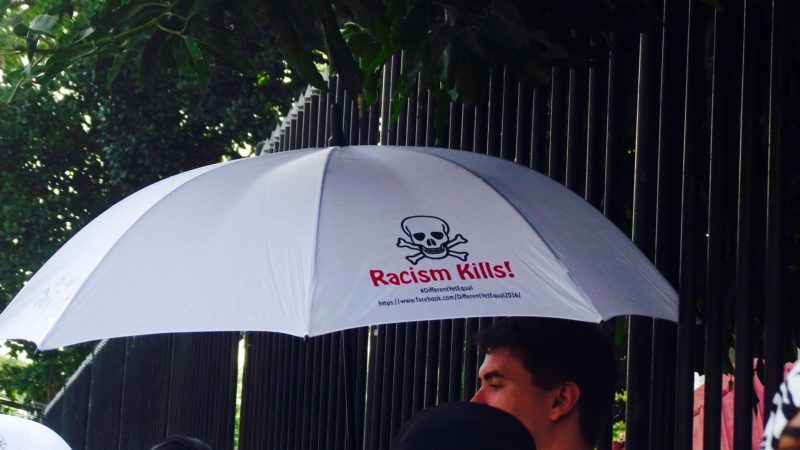 This post by Raisa Wickrematunge originally appeared at Groundviews, an award-winning citizen journalism website in Sri Lanka. An edited version is published below as part of a content-sharing agreement.

The corner of Bauddhaloka mawatha near Independence Arcade was relatively quiet at 4:30 p.m., apart from a small group holding white umbrellas.

These were participants of “Different Yet Equal,” an online-led campaign aiming to hold a peaceful vigil to advocate for a pluralist Sri Lanka, united against hatred and divisiveness.

As the crowd slowly grew, vigil participants eventually lined themselves up along the pavement, holding placards proclaiming “We all have the same blood” and condemning racism.

#DifferentYetEqual 🙌🏼 I believe that unarmed truth and unconditional love will have the final word.

The underlying message was to pushback against the distinctive stickers that now adorn many trishaws and vehicles across the country—all bearing the word “Sinha-Le,” meaning “lion’s blood” in Sinhala—a reference to the lion ancestor that Sinhalese Buddhists claim. While there has been no violence as yet from this group, Muslim houses were spray-painted with this slogan earlier this year. (See Global Voices’ report.)

As vigil-goers began to speak about why they had gathered, a sudden disruption followed the appearance of counter-protesters that included Buddhist monks purporting to be from the Sinha Le movement. The monks said they objected to the appropriation of the term “Sinha Le,” which they felt was “their” word. “This is a Sinhala Buddhist country” they chanted repeatedly. The group was also carrying a distorted version of the Sri Lankan flag, notably missing the stripes denoting the country's minorities. 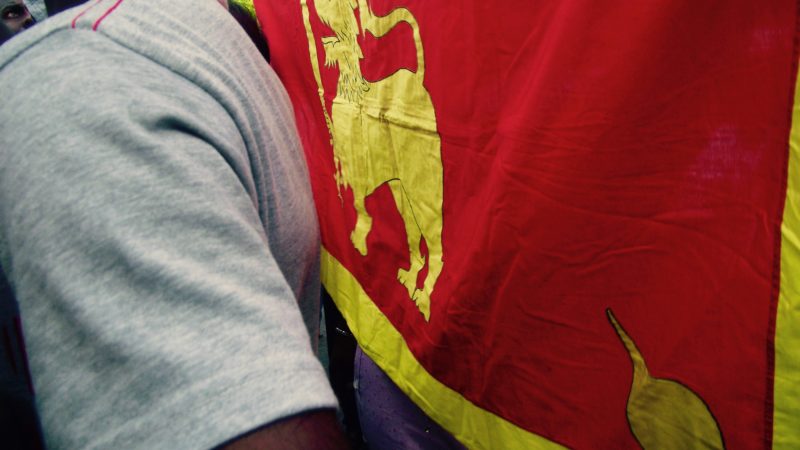 Some participants, including former Deputy Mayor of Colombo Azath Salley, tried to confront the counter-protesters verbally. The situation soon escalated into a shouting match.

It was telling that most of the counter-protesters raised Sri Lanka’s population and the fear that the Sinhala Buddhist population was, somehow, being “overrun” by minority communities. The counter-protests refused requests to leave, saying, “Let them leave! This is our country!”

As the chaos unfolded, the police had to be prodded into action. Though there was an officer standing just feet away, directing traffic, the vigil's participants had to approach him directly and ask him to intervene. Even then, the officer seemed to be most concerned about keeping road traffic unobstructed, and he paid no apparent attention to the group of counter-protesters.

When vigil participants pointed out that the group's flag was distorted and asked if this was the true national flag, the Sinhale faction answered, “Yes, check your history books.” Article 6 of Sri Lanka’s Constitution, however, clearly marks the national flag as “the Lion Flag.”

Eventually, the police tried to de-escalate tensions by asking the participants to sit down on the pavement and stop disrupting traffic. This the participants promptly did. The group of counter-protesters, however, continued trying to agitate the crowd—and it was only then that a police officer pushed a counter-protester away from the scene. The group remained until the vigil ended.

The vigil highlighted that the insecurity felt by some Sinhala Buddhists continues to persist, despite the fact that they remain the country's majority community. The planned disruption seems to have worked, in part, as well: media reports about the vigil focused on the conflict with counter-protesters, saying relatively little about the vigil itself. Counter-protesters’ slogans—not the message of the vigil—dominated the news coverage.

The vigil's organizers might have prepared better for such disruptions, given that a similar disturbance was staged at a candlelight vigil outside the Buddhist Cultural Centre on Sambuddatva Jayantha Mawatha in 2013 (covered extensively by Groundviews).

Many vigil participants engaged in verbal shouting matches, enraged by the counter-protesters’ xenophobic rhetoric. This, it seems, is exactly the reaction the group wanted, allowing them to swing the news narrative and grab the spotlight. (Apart from the appearance of the distinctive “Le” stickers, as well as the formation of parties like the Sinhale Jathika Balamuluwa, these hardliner activists had been relatively silent until this month.)

While the incident was certainly tense, there was one moment when the vigil's participants sang “Lowe Sama” to drown out slogans being shouted by the pro-Sinhale faction:

The singing prove effective, if only for a moment, and counter-protesters briefly stopped chanting and stood around suddenly nonplussed.

Below are audio clips from individuals who attended the vigil, explaining why they decided to come: