In Syria and Beyond, Protesters Make Sure the World Doesn't Forget the Ghouta Chemical Massacre 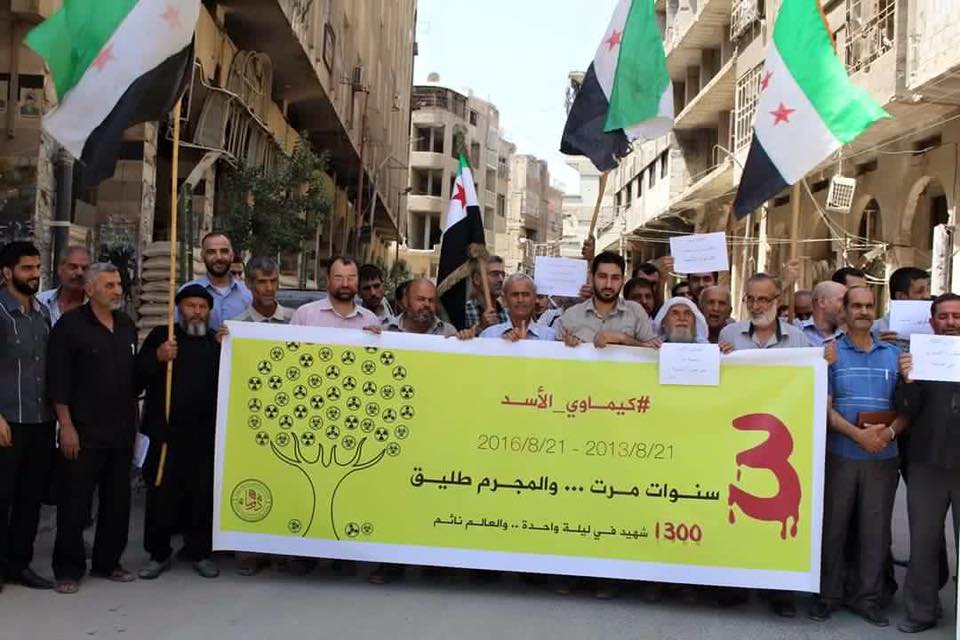 In the early hours of August 21, 2013, residents of rebel-held Eastern and Western Ghouta in Syria, woke up to the news that rockets containing a nerve agent had hit their area. As the day wore on, the number of dead continued to rise, reaching into the hundreds. Estimates range anywhere from over 350 to over 800, while a preliminary US report claimed the attack had killed over 1,400 individuals.

A member of a media center in Zamalka described the strikes to Human Rights Watch at the time and the sensation he felt when the gas started affecting his body while he was rescuing people:

When the explosion hit I heard a very low sound, it was like the sound of a helicopter buzzing, and not the sound of explosion… I went outside the field hospital and started running towards the explosion site. I didn’t reach the explosions site because I saw injured people on the ground and people screaming and running in all directions… I remember I went into one house and saw a man with his wife on the ground. The house was not destroyed. It was not where the rocket fell or had an impact but they were dead on the ground. After around 40 minutes rescuing people, I started feeling my body aching. I was feeling weak and unable to move. Then my eyes started hurting me and headache started. There was no smoke but there was a smell… I told my friend that I have to go to the hospital. He put me in a car and drove away… I remember very well when we left al-Mazraat in my friend’s car, I saw a dog crossing the street. I shouted to my friend to be careful not to hit him but before I finished my sentence the dog by itself collapsed on the ground

Syrian Activist Razan Zeitouneh, who has since been kidnapped alongside three well-known activists who are now known as the ‘Douma 4‘, talked to US-based independent news broadcaster Democracy Now soon after the event and described the scenes right after the attack:

Three years later, Syrians and their supporters around the world commemorated the tragedy and demanded that the international community take action.

From within Syria, in Douma, one of the areas that were targeted, a banner was held that read:

#Chemical_Assad. Three years have passed…. And the criminal runs free. 1,300 martyrs in a single night… and the world is sleeping

The Ghouta attack happened two years into a brutal civil war in Syria between Bashar al Assad's regime and those who want his ouster. The Syrian opposition, as well as many human rights groups and governments around the world, say Assad was responsible. They point to forensic details in the official United Nations report into the attack — which did not assign blame — that implicate forces loyal to his government.

Assad and his allies, such as Russia, blame the rebels. Nevertheless, Assad signed the Chemical Weapons Convention, which bans the development, production, stockpiling, transfer and use of chemical weapons as well as requires members to destroy their stockpiles, after the attack — although there's evidence he hasn't stayed true to the convention since then.

To mark the attack's anniversary, the US-based activist group “How Many More?” tweeted the names of every victim on their account:

People also stood in solidarity with the victims in Gothenburg, Sweden as well as in Paris, France. 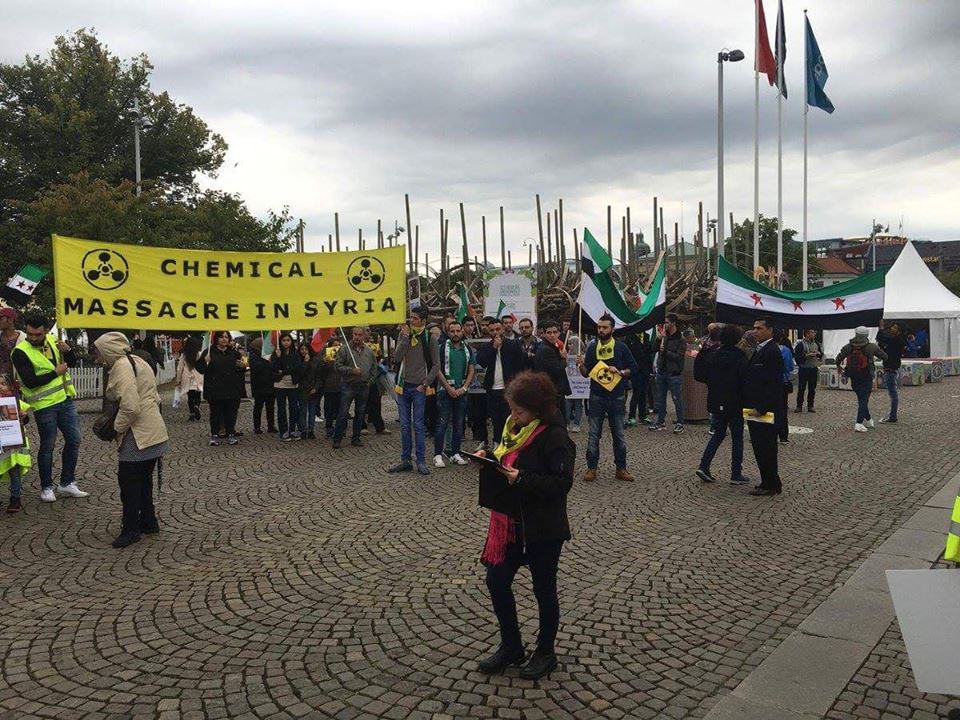 Global Voices attended the London commemoration in Trafalgar Square organized by the UK-based Syria Solidarity Campaign and spoke to one of its spokespersons, Abdulaziz Almashi.

Global Voices (GV): What was the purpose of the protest today?

Abdulaziz Almashi: Today, the purpose of the protest was to mark the third anniversary of the chemical massacres that took place in Ghouta back on the 21st of August, 2013, in which 1,477 people were killed and more than 3,000 were injured in three chemical attacks in Arbil, Douma and Muadamiyat. So today, we got out to show respect to the victims, to show solidarity with our people and with the families of the victims and to send a strong message to the international community that Assad has been using chemical weapons. He has used them so many times, even after he signed the chemical weapons disarmament treaty. But still, just like a few days ago, he attacked Aleppo with chlorine gas, and Idlib the same thing. So here we say to the world, you are part of this crime and Assad must be referred to the [International Criminal Court] for his war crimes

GV: What do you expect of the international committee? You just said that someone must hold Bashar al Assad accountable.

GV: How can people help in this campaign?

Abdulaziz Almashi: We always say what happens in Syria doesn’t just concern Syrians, it concerns every human being. If Assad is allowed to win the war in Syria, there will be tragic consequences not just in Syria but in the whole world, because other dictators and other countries will take Assad as an example and will use chemical weapons to crush any democratic movement within their home countries. That is why it is crucial for everyone to stand in solidarity with the Syrian people because we are fighting not for democracy in Syria but for democracy in the whole world. We must teach all dictators a lesson, that all people will come together against any dictatorial regime in the world.