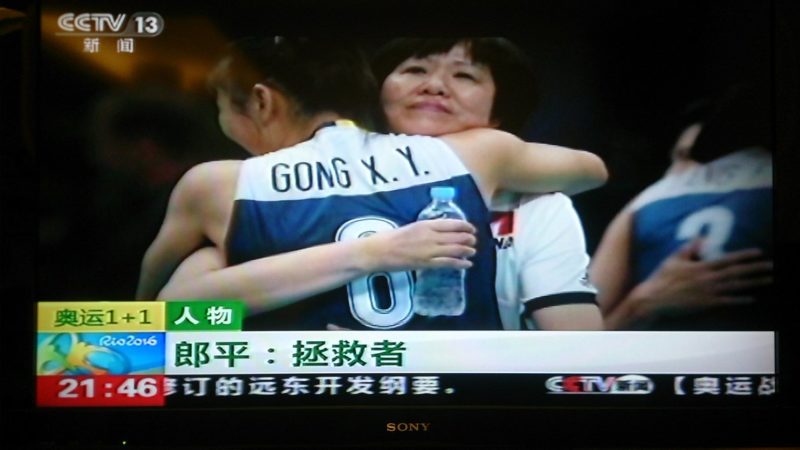 Twelve years after their last gold medal finish, China’s women's volleyball team took gold in the 2016 Rio Olympics on August 20 in a 3-1 win over Serbia. Volleyball lovers know that the team's success is in large part due to Lang Ping, the team’s coach.

Lang has made a name for herself pushing back against Chinese Communist Party sports policy and forging her own path in the world of sports. She once was even accused by trolls of being a traitor for coaching the American volleyball team to victory over the Chinese team in the 2008 Beijing Olympics.

The 56-year-old former spiker was a national hero in the 1980s for leading China to snatch a number of world titles, beating Japan's and Cuba's volleyball teams. The “Iron Hammer,” Lang's nickname, came to represent teamwork and persistence: the spirit of women's volleyball.

Following victory in Rio, all Chinese media outlets praised the spirit of Chinese women's volleyball, with some drawing parallels between the team's perseverance and China's economic strength.

Lang's contribution was also highlighted, but her individual journey, in particular her decision to leave the country after she retired from play in 1986, rarely made appearances in Chinese reports. That's because many of her choices have been interpreted as showing distrust in the Chinese Communist Party-led sports system.

As prominent journalist Gao Yu pointed out on Twitter:

Congratulations to the Chinese women's volleyball team’s gold medal win after 12 years. It is difficult to imagine today’s success without Lang Ping. She is a world-class coach and she is Chinese. She is an independent Chinese who has been exposed to the international field of sport, she is not a cog in the machine of a national bureaucratic sports system.

Indeed, unlike her contemporaries in the world of athletics who have built careers as government officials in the State General Administration of Sports, Lang rejected the government job offer in the sports bureau after her 1986 retirement and left the country to study sports management at the University of New Mexico in the US.

Her decision was related to a corruption scandal involving the construction of a volleyball training site in Hunan in southern China back in 1984. Lang helped the local authorities ask for funding from the country's Central Planning Committee. The funding was approved, but the local authorities did not use the money for the training site, and she was then dragged into a corruption investigation because of their actions. She commented on the experience in her autobiography (via Mingjing News):

This incident has been buried in my heart and cannot be wiped away. Some officials are like this: they have to echo the words of others even though they became government officials. Even if they do not agree, they have to follow instructions from above. I can’t be an official like this, I could not follow an etiquette like this. I have a soft heart and have compassion. I can’t be an official. I want to learn something concrete, scientific and useful.

In her 22-year coaching career, she has led volleyball teams in Asia (including China between 1995 and 1999), Europe and the US, helping them win regional and even world championships.

When she started coaching the US volleyball team in 2005 and led them to beat the Chinese team at Beijing's Olympic Games in 2008, she was called a traitor by “patriotic” trolls online.

However, bad-mouthing Lang could not help China's volleyball team regain its former strength. In 2012, China’s women's volleyball team failed to enter the semi-finals in the London Olympics, and the team was ranked the fifth by the International Volleyball Federation in 2013.

To rescue the team, officials from the state sport bureau invited Lang to coach them again. She finally agreed on the condition that authorities could not intervene in the management of the team.

After Lang became head coach, she recruited new blood, promoted young players to key positions, formed a coaching team and expanded the support team, which includes trainers and medical staff. More importantly, she gave up the conventional semi-military training method and encouraged her players to develop their own individuality on the court.

The fact that Lang brought the China’s women's volleyball team to a Buddhist temple before the Olympics illustrates how she defies the party’s ideological line, Gao Yu suggested:

Paying tribute to the Buddha is better than copying the party's disciplinary code: Lang Ping and other coaches led the team to Mount Putuo [in China] to pay tribute to the Buddhist gods. [Jokes online said] the China’s men's football team also wanted to visit Mount Putuo, but the monk said, “Please don’t make the gods feel difficult.” In August, before [the women's volleyball team] departed for the Olympics, they visited the Mount again and asked the monks to pray for them.

Chinese media is pushing the narrative that the women's volleyball team's Olympic win under Lang is a tale of patriotic conformity. But if Lang is the embodiment of women's volleyball spirit, the team's gold medal victory seems to be a success story not for the state-managed sports program, but for individuality and creativity in the pursuit of excellence.