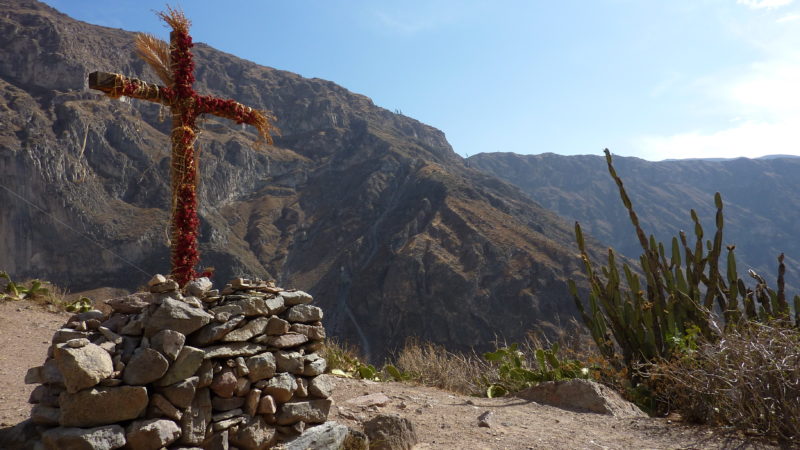 A 5.2-magnitude earthquake hit southern Peru on Sunday, August 14. The quake came at night, centered in the village of Chivay, Caylloma province, in the region of Arequipa. Four people were killed in the disaster, and the number of locals affected is much larger.

Chivay, nestled in the Colca Valley, which is a well-known tourist destination, endured more than 60 aftershocks of varying intensity in the hours that followed the initial earthquake.

The epicenter would have been very close to Maca, a settlement that has already suffered previous earthquakes, as it is located between geological fault lines on muddy terrain:

The epicenter was in Maca, an artisan village on fault lines, which still is sinking and had made an (failed) attempt to relocate.

In Caylloma, the earthquake hit during the celebrations of the Assumption of Mary, one of the most important of the region. The Christian site Aleteia describes how those who were out of their houses felt they were saved for being outside during the earthquake:

Chivay's villagers thanked their patron for keeping them out of their houses [during the earthquake]. Hours before the telluric movement […] celebrations with music and dances were out in the open… [For some] it was surprising to see how the villagers stopped thinking about the state of their homes for some minutes, so they could express their faith through dancing.

According to social media, other surrounding villages, like Yanque and Ichupampa, suffered great damage to their infrastructure, as well.

Already there have been three aftershocks associated with the earthquake in the Colca Valley all superficial. Yanque is totally destroyed

The district of Yanque is the most affected by the earthquake in Caylloma: Arequipa

Ichupampa needs us.
158 houses destroyed
More than 600 victims.
The temperatures are below freezing at night….

To help those who were affected, the government activated humanitarian aid programs that start assisting communities in need:

Right now, the first truck of humanitarian aid is arriving at Yanque from the city of Arequipa

Many vital roads were closed thanks to landslides caused by the quakes. Water and food are scarce and the access to the towns is difficult. The growing number of the affected can be translated in people sleeping in the open, under freezing temperatures; and also families standing helpless next to the remains of their homes, waiting impatiently for aid.

The planned reconstruction of the towns that were destroyed is scheduled to get underway by the end of this year. This should include 693 of the houses that collapsed and 1,358 of those declared inhabitable. Also, since the affected towns are home to a considerable amount of the colonial-era patrimony in the Colca Valley, the reconstruction is expected to respect these cultural landmarks as well as the region's natural landscape.

This text is an adaptation of a blog post published in “Globalizado,” Juan Arellano's blog.