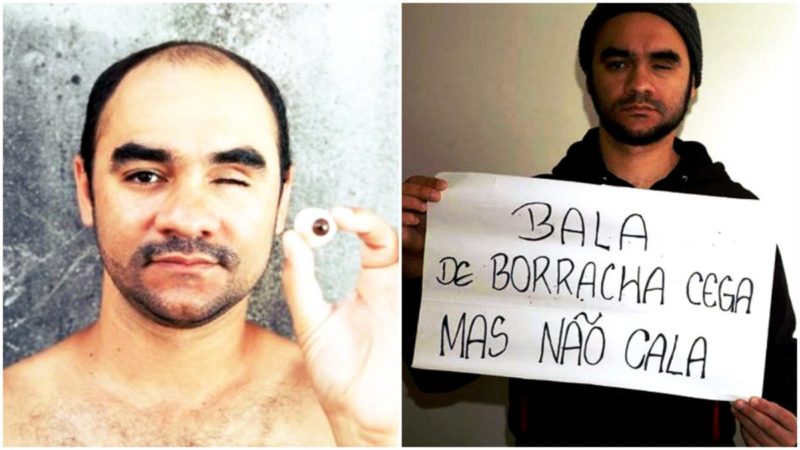 On the left, Sérgio Andrade da Silva with a glass eye. On the right, Silva with a sign that reads, “Rubber bullets blind, but won't silence”. Photo taken by Silva, free to use.

In June 2013, Brazilian photographer Sérgio Andrade da Silva lost his left eye after being shot with a rubber bullet by a military police officer while covering a street demonstration. He sued the state of São Paulo and demanded 1.2 million Brazilian reais (375,000 US dollars) in damages and a pension of 2,300 reais (720 US dollars) a month for the rest of his life, as well as coverage of all his medical expenses.

This week, his suit finally went to court — and a judge denied his request.

Massive street demonstrations flooded Brazilian cities in June 2013, with millions turning out to demand better public services. Journalist Juliana Vallone, from the newspaper Folha de São Paulo, was also shot in the eye during the protests, but unlike Silva, she made a full recovery.

the possible consequences of what could happen, stemming from this behavior, leads to exclusion of responsibility, where the subject by his own exclusive fault, putting himself in the line of confrontation between police and protesters, voluntarily and knowingly took the risk of being targeted by some of the opposing groups.

In other words, the judge deemed Silva guilty of losing his eye because he put himself in danger.

On social media, many Brazilians reacted to the ruling by arguing that journalists simply get no protection from police violence while covering demonstrations, and are sometimes even targeted on purpose. Brazil’s military police often act with violence, not only against journalists but also the country’s black population in favelas, where officers have murdered residents with impunity, according to human rights groups.

Silva created a petition on Change.org demanding that São Paulo's court of appeals review the judge's decision. So far it gathered more than 3,000 signatures. In the petition, Silva comments:

The decision of judge Olavo Zampol Júnior is another shameful and monstrous episode of judicial violence against the victims of military police. It is a demonstration that the state only defends its own interests — and that these interests are definitely not the same interests of the citizenry. What to do in the face of such injustice? It is difficult to know. It is shocking to read a public document written with such a level of effrontery. But I choose to resist, and I know I have many people by my side.

Some online commenters compared the judge's decision to another incident of protest-related violence in which the assailants were promptly punished. In February 2014, a cameraman from a Brazilian TV station, Santiago Andrade, died after being hit by a firecracker while covering a demonstration. It was later found that the firecracker was launched by two protesters, who spent a year in jail while awaiting trial (they were released on bail last year and are expected to be found guilty and sentenced to between two and eight years in prison). 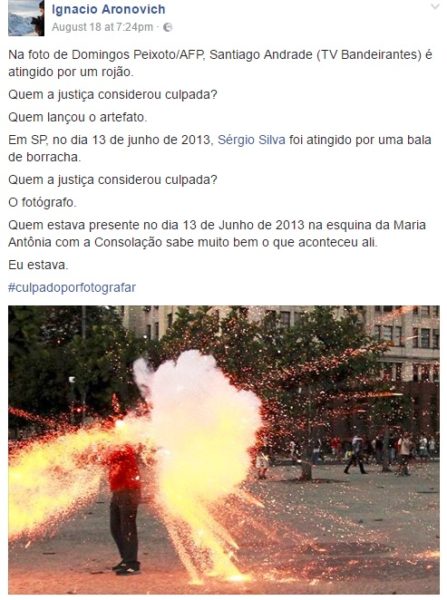 Ignacio Aronovich posted a photo of the moment Santiago Andrade was hit by a firecracker in 2014, taken by Domingos Peixoto/AFP. Andrade died of his injuries. Screenshot from Facebook.

In the photo by Domingos Peixoto/AFP, Santiago Andrade (Bandeirantes TV) is hit by a firecracker.

Who does the court consider guilty?

The people who launched the device.

Who does the court consider guilty?

Those who were present on June 13, 2013, at the intersection of Maria Antonia and Consolação streets knows very well what happened there.

Davi Duarte, a professor, also commented on his Facebook page:

The police officer who aims a rubber bullet at a person's eye, shoots and leaves him blind is nothing but a psychopath who reinforces the people's rightful rejection of the uniform.

Maycon Nunes, who is also a professor, showed his support to Silva on Facebook:

The judge blames photographer Sergio Silva for being in the line of fire. They blame the victim!

If Sergio Silva is guilty for doing his job, doing what he's paid to do, for photographing, here is my manifest!

A silent people are an imprisoned people!
#GuiltyOfPhotographing 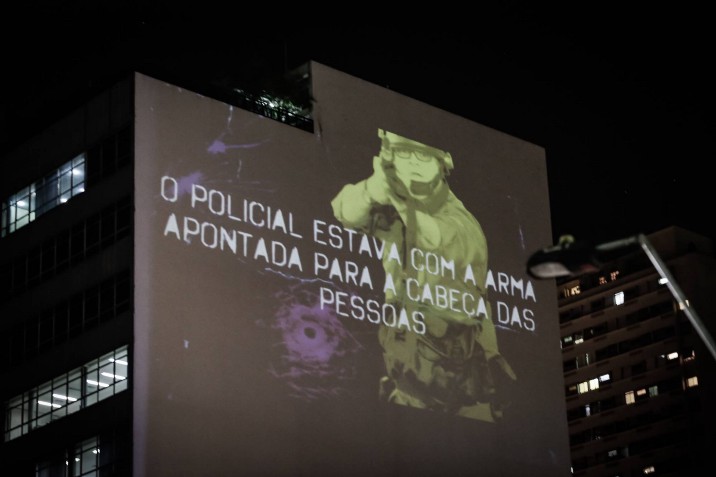 “The police officer had his gun pointed to people's heads”. Photo by Alice V/Democratize, used with permission

On Twitter and Facebook, users are using the hashtag #culpadoporfotografar (guilty of photographing) to show support for Silva and to protest against the São Paulo judge's decision. NGOs such as Article 19 have also stood by the photographer. Silva will appeal the decision in higher courts.