Earlier this month, Thailand’s voters approved a new constitution in a nationwide referendum. Supporters of the new document, which was drafted by the military-backed government under the National Council for Peace and Order (NCPO), say it paves the way to the restoration of civilian rule. Critics, however, worry that the new constitution only institutionalizes Thailand's military dictatorship and its crackdown on the media.

When the army grabbed power in 2014, it assured the public that elections would be held once political and electoral reforms have been implemented. Two years later, the junta remains in power. Political demonstrations are banned, the media is heavily regulated, and activists detained by police are often subjected to “attitude-adjustment” sessions.

The NCPO urged the public to approve the draft constitution, saying it would expedite Thailand's political “normalization,” making elections possible in 2017 or 2018. Any campaigning for or against the constitution was prohibited, however, and critics say voters were deprived adequate information about the content of the document. Fearing punishment for illegally trying to “persuade” people, both journalists and scholars avoided discussing the draft constitution publicly in significant detail.

Those who expected the military to step down and recognize civilian supremacy in government will be disappointed to learn that the constitution allows the military to rule the country through various means. For example, 194 senators will be selected by the NCPO.

The infographic below, published by independent news website and Global Voices partner Prachatai, explains the various constitutional mechanisms that will allow the military to retain control of the government: 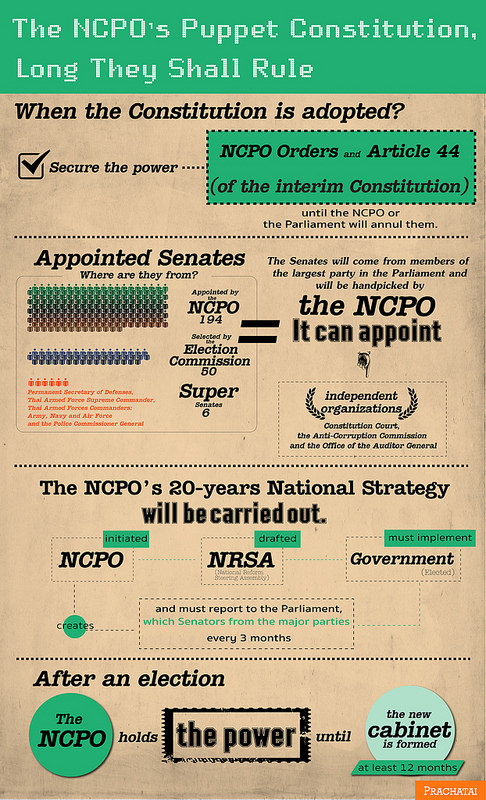 The military's restrictions on the media don't appear to be going anywhere, either. The Southeast Asian Press Alliance (SEAPA) warns that the constitution “provides the state with potentially more power to intervene on press freedom and freedom of expression.” It added that the new constitution is a “regression” compared to the 2007 constitution, when it comes to upholding the freedom of the media.

Section 35, meanwhile, abandons certain media protections found in Thailand's 2007 constitution, jettisoning the right of media outlets to organize their own personnel ranks, self-regulation, and promotion of professional ethics. According to the newly adopted constitution, state-media journalists also lose guarantees of editorial independence. The 2007 constitution classified interventions by the state in the media as “misuses of power.” The new constitution does not include this language. 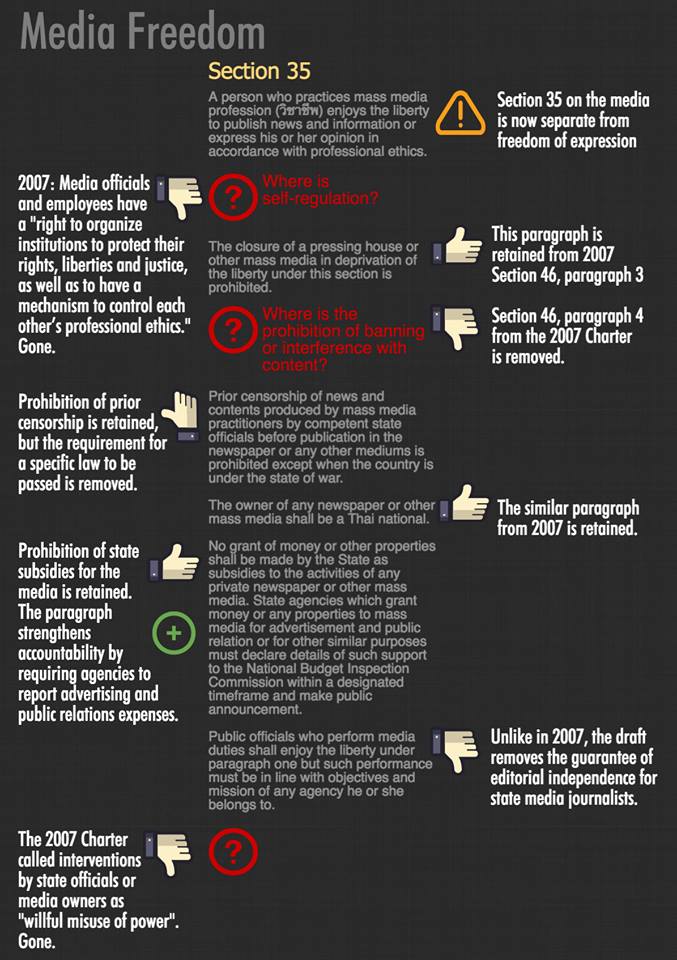 By all accounts, Thailand’s new constitution boosts the dominance of the military, threatening to institutionalize even further a culture of censorship and state control over the media.