Breaking the Siege of Aleppo 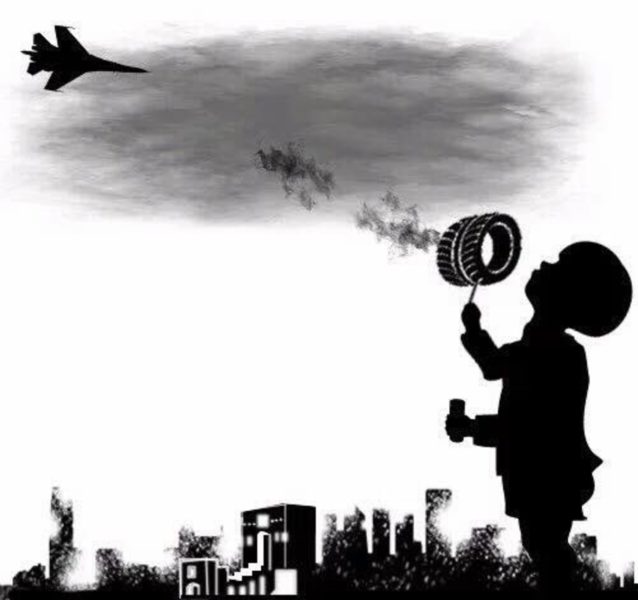 “In the days of intense fighting last week, in a tragi-comic display of defiance, the people of Aleppo burned hundreds of tires, sending plumes of black smoke into the air to create their own No Fly Zone.” IMAGE: Graphic shared widely on social media.

The people of eastern Aleppo celebrated on August 6 after rebels broke through the siege that had been imposed on them by the Syrian regime and its allies since July 17. For almost a month, the areas of the city held by the revolutionaries since July 2012 had been turned into an open-air prison where some 300,000 people stockpiled food and supplies for fear of starvation.

It required a great feat of unity on the part of the rebels, with their vastly inferior arsenal, to break the siege. The democratic nationalists of the Free Syrian Army joined together with Islamist militias and, crucially, Jabhat Fatah Al Sham, which until earlier this month had been known as the Nusra Front, Al Qaeda’s affiliate in Syria.

“It required a great feat of unity on the part of the rebels, with their vastly inferior arsenal, to break the siege.”

Syrian civil society was not generally impressed by the rebrand. Whilst Nusra has avoided the strict imposition of Islamic law in areas where it has a presence, there has been popular opposition to the group due to its attempts to undermine local civil administrative structures, and its establishment of parallel structures such as Sharia courts. Nusra has also arrested civil society activists, including journalists and local council members, and has been responsible for sectarian attacks. Indeed, revolutionaries in Idlib province—site of the revolution’s first large-scale attack on Assadist forces—have been protesting for over five months against Nusra’s refusal to submit to independent courts and calling for the release of Nusra’s detainees.

Nusra was pushed out of Aleppo in 2014 by popular pressure, but returned recently. It has clashed with other rebel groups, and its attempts to dominate institutions and the provision of services such as electricity and food supply have made the group unpopular among city residents.

But the demands of survival supersede political principles. Many democrats—who are terrified by the prospect of jihadist rule—find themselves celebrating jihadist advances. Nusra is a key component of Jaish Al Fath, the Army of Conquest, which freed the city of Idlib from the Syrian regime last year. And Jaish Al Fatah led the assault that broke the siege of Aleppo.

Residents of liberated Aleppo demonstrated in support of the counter-offensive. In the days of intense fighting last week, in a tragi-comic display of defiance, the people of Aleppo burned hundreds of tires, sending plumes of black smoke into the air to create their own No Fly Zone. The successful breaking of the siege only increases the importance of Nusra in the eyes of the local population. This is where abandonment has led.

If Aleppo had fallen, which seemed imminent in the days before the siege was broken, it wouldn’t have ended the war. But it may have signaled the death of a revolution which has already been betrayed and abandoned. A free Aleppo embodies the aspirations of the continuing but increasingly marginalized popular struggle for freedom.

“If Aleppo had fallen, which seemed imminent in the days before the siege was broken, it wouldn’t have ended the war. But it may have signaled the death of a revolution which has already been betrayed and abandoned.”

With little beyond rhetorical support from their supposed friends in the West, the people of Aleppo had pushed out the Assad dictatorship in July 2012 and pushed out Daesh (ISIS) extremists in January 2014. The liberated districts in the east ran their own affairs and struggled to keep basic services operating through their democratically elected local councils. One of the largest concentrations of active civil society groups anywhere in the country came into existence, including dozens of free media groups and emergency and relief organizations such as the ‘White Helmets’ Civil Defense Force. A group of women set up the first women-owned independent radio station, Radio Naseem, whose programming addresses human rights issues, women’s role in the revolution and the dangers posed by extremism. This is the legacy of the revolution, the embodiment of its democratic ideals and its resilience, and it is all this that is currently being bombed out of existence.

Aleppo has suffered years of artillery strikes, barrel bombs and scuds, but the current bombing is the most intense ever. Hospitals and camps for displaced people have been bombed repeatedly by the Russian or Syrian air forces. Attacks on residential areas by the regime and its allies have driven thousands from their homes. With nowhere else to go, many are now sleeping in public buildings or outdoors. Water, electricity and healthcare facilities are being deliberately targeted. These war crimes have brought essential and life saving services to the brink of collapse. Critical shortages of medical supplies and physicians leave little help for the daily wounded.

In retaliation for the rebels’ recent success, Idlib is being pounded by airstrikes, with reports of Russian jets dropping incendiary thermite bombs on civilian areas. Last night there were reports of chlorine gas attacks on rebel held Aleppo.

In such a context, regime/Russian claims of establishing ‘humanitarian corridors’ for people to flee are seen for what they are: an attempt to depopulate the opposition held area and signal that those who remain are a legitimate target for the mass slaughter now taking place. The bombs need to stop and aid desperately needs to be allowed into the city.

“In such a context, regime/Russian claims of establishing ‘humanitarian corridors’ for people to flee are seen for what they are: an attempt to depopulate the opposition held area and signal that those who remain are a legitimate target for the mass slaughter now taking place.”

The US administration, never a true ally of the popular struggle, is now pushing for greater military cooperation with Russia in the ‘fight against terrorism’. According to Russia’s definition this includes any opposition to the regime. This short-sighted policy suggests it trusts Russia to pressure the regime to end its assault on moderate rebel groups and opposition-held territory, despite Russia and the regime’s failures to abide by any agreements made relating to ceasefires or access for humanitarian aid. The perception on in the ground is that the US is collaborating with the attackers. If democratic anti-regime forces are crushed by foreign powers and sectarian Shia militias, violent extremism will only grow in their place.

The West doesn’t need to intervene militarily against the regime or Daesh. Syrian revolutionaries have been successful in defeating them in the past and they could do so again. But much stronger political and economic pressure is needed on countries propping up the regime (the main cause of the bloodshed and extremism) to end their support. Assad can’t hold ground alone and is completely dependent on foreign forces for survival (Russian airstrikes, and Iranian-backed Shia militias on the ground). The regime is desperately attempting to recruit prisoners and teachers to fight as regime loyalists try to avoid conscription or flee.

As Aleppo burned, then starved, the United States appeased Russia and Iran, turned a blind eye to Iran’s Shia jihadists, vetoed anti-aircraft weapons to the rebels and failed to give adequate support to democratic civil initiatives. Al Qaeda’s former affiliate, on the other hand, are giving their blood to save the city. The ramifications will be enormous.

Leila Al Shami is a British Syrian who has been involved in human rights and social justice struggles in Syria and elsewhere in the Middle East since 2000. She is the co-author of “Burning Country: Syrians in Revolution and War” with Robin Yassin-Kassab, and a contributor to “Khiyana-Daesh, the Left and the Unmaking of the Syrian Revolution”. A version of this story was originally published on her blog.