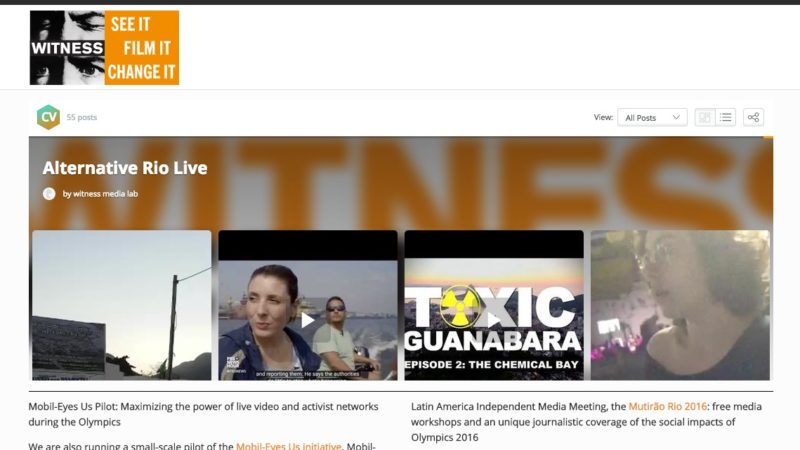 The Rio Olympics recently welcomed the world’s finest athletes and provided a stage for Herculean feats of physical achievement, but the event’s host city stood as a backdrop of stark inequality. From the forced eviction of the community of Vila Autódromo to give way to the Olympic Park to deplorable working conditions, myriad rights violations underlay the spectacle.

It might have been easy for these abuses to be swept under the rug as the media’s light shone on medals and pageantry, but activists harnessed the power of new technology to compile and share evidence of the cost of Rio 2016.

CrowdVoice.by is a new tool that enables activists and grassroots organizations to collaboratively curate media related to their causes. It streamlines the task of collecting and disseminating evidence, drawing in content from multiple sources for distribution across many different platforms. It encourages users to harness the power of their networks to work faster and smarter.

WITNESS, an international organization that trains citizens in the documentation of rights violations, used CrowdVoice.by to curate live streams and information shared on social media regarding the the conditions faced by residents of Rio de Janeiro for its feature “Rio 2016 Human Rights Live.” Because CrowdVoice.by employs embeds, it can be easily used in conjunction with other tools within the framework of an organization’s webpage. In the Witness feature, a CrowdVoice.by media feed is used alongside a Timeline tool from the news media innovation Knight Lab.

Another movement, Rio2036, used CrowdVoice.by to showcase background information regarding its cause. The campaign formed in opposition to proposed legislation that would freeze government spending on social services in the city. A media embed appears on the site alongside printable stickers to promote street-level awareness of the issue during the height of the Olympics, exemplifying an intersection of digital and on-the-ground activism. CrowdVoice.by allows visitors to the page to browse realtime information from multiple sources within a single space, and even contribute media directly to the stream. 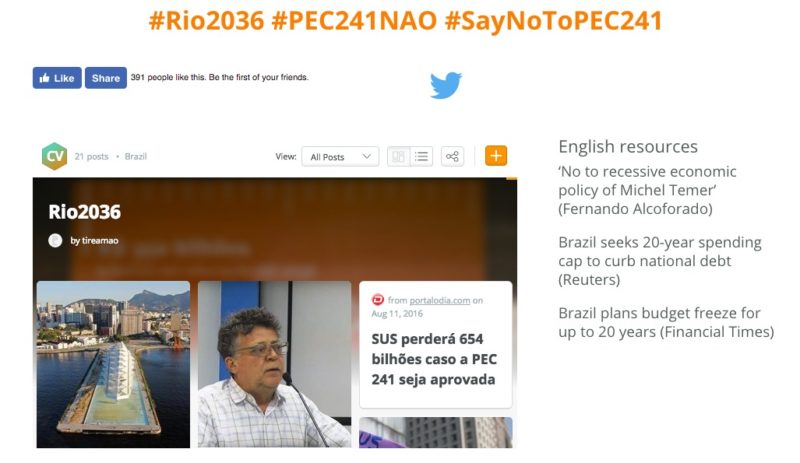 Though CrowdVoice.by is only in its beta iteration, it is already seeing adoption by the technology-savvy activists of Rio de Janeiro to ensure that the issues they work to address are not eclipsed or overlooked. CrowdVoice.by and tools like it have countless applications in countless communities beyond Brazil and beyond the Olympics. Technologies tailored specifically for the needs of human rights defenders have the ability to empower citizens everywhere to tell their own stories, and use the evidence they gather to demand culpability and change.

CrowdVoice.by is hosted by Majal, a network of online platforms that amplify under-reported and marginalised voices throughout the Middle East and North Africa. The author of this post, Abir Ghattas, manages Mideast Tunes, a music platform also hosted by Majal.